People Are Shelling Out $197 to Have Chocolate Poured on Their Hands. Here’s Why. 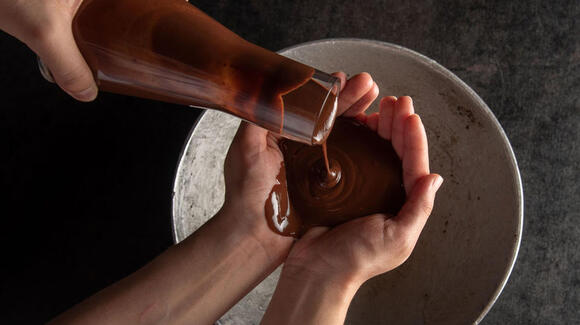 It’s a video that has amused and confused the Internet the last few days. A woman sits flanked by Champagne flutes, hands hovering above a large gray bowl when a waiter approaches with a white pitcher. He’s not not there to finish a plated dish with a sauce. He starts dumping chocolate sauce all over the woman’s upturned palms as she giddily lathers her hands with the confection. The waiter then moves to the gentleman sitting next to her and repeats the process. The duo shove their fingers into their mouths and the nod at each other with cheshire grins. It’s one of the stranger tableside service flourishes you’ll ever see.

On Twitter the video has crested 9 million views and people on the Reddit sub We Want Plates have been left in disbelief. “They already have bowls…just give them spoons,” one commenter pleaded, while another wondered if this was a joke the kitchen was playing on unsuspecting diners. It wasn’t.

The couple—Latin Grammy winner Mariaca Semprún and Venezuelan novelist Leonardo Padrón —were at the Miami location of El Cielo , an immersive tasting menu restaurant from chef Juan Manuel Barrientos that has a Michelin star for its DC outpost, while it’s Bogotá, Colombia, flagship is ranked No. 74 on the Latin America’s Best Restaurants list. The chocolate hand bath is a nightly occurrence on the $197 tasting menu, currently happening after the Blood Sausage Macaron and two courses before the “Tree of Life,” a piece of yucca bread served atop a wire bonsai tree.

Named “Chocotherapy” on the menu, the cacao rinse begins with a little towel to clean your hands, then the chocolate bath followed by water being dumped over your paws into the giant bowl and finished with a napkin to dry off. Its of a piece with the restaurant that aims for an avant garde cooking style rooted in Colombian culture as well as other Latin American cuisines. The course is an ode to chocolate, which was used as a currency in the days before European colonization. And the idea behind washing your hands with chocolate before licking it off is to “awaken the senses” at the beginning of the meal.

What seems more apt is that the Chocotherapy is meant to be a visual stunt ideal for the Instagram era, which is apparent when you search posts made from any of El Cielo’s locations. Diners are regularly showing off their cacao-coated mitts with the same “would ya get a load of this ” expression that Semprún and Padrón sported in their video. Well, we’ve got a load of it. That doesn’t mean we want to do it ourselves.

I Can Think Of A Lot Better Things, To Spend Money On. 🤣 Groceries,For Instance. God Bless 💗🙌

adults playing like children what is the world coming too. and the bad thing is they actually pay for this

Because they have more dollars than sense.

Click here to read the full article. This palatial, $85 million estate is currently the most expensive listing in Seattle, and it certainly features enough amenities to warrant the title. It’s also got some pedigree: The seller is Bruce McCaw, brother of cell service billionaire Craig McCaw, who purchased the home In 1999 from renowned saxophonist Kenny G. Located in the esteemed town of Hunts Point just outside the city, the home is shrouded in privacy thanks to the towering trees and hedges on either side. And once you step foot on the 4.3-acre property, it’s like being at your own...
SEATTLE, WA・8 DAYS AGO
Robb Report

Click here to read the full article. It’s the sort of thing that only Mercedes-Benz could really do. On Thursday, at the Côte d’Azur’s new Maybourne Riviera hotel above Monte Carlo, Mercedes-Benz capped off its Capital Markets Day summit for investors with a couple of groundbreaking reveals. Formula 1 racers Lewis Hamilton and George Russell helped officially debut the all-electric Vision AMG concept car in what, on any other occasion, would be a truly grand finale. It’s hard to believe that a car representing such a pivotal shift for AMG could be upstaged, but indeed it was. Less than an hour after the Vision AMG was made...
BUYING CARS・5 DAYS AGO
Robb Report

Home of the Week: This Insane $26 Million Utah ‘Log Cabin’ Has a Helipad and Heated Driveways

Click here to read the full article. In our unpredictable times, it doesn’t hurt to have a backup plan. While the seller of this sprawling compound, who wishes to remain anonymous, might not be a doomsday prepper, all of the safe rooms and spy-like features in his residence serve a purpose.  A cabin might conjure up images of a quaint log home, but this Utah residence at 7600 E. Deer Knoll Drive is anything but simple. Located just 40 minutes outside of Park City, the place—which took four years to complete—spans 12,377 square feet, which includes the detached garage and the...
7 DAYS AGO
The US Sun

ON a hot summer's day, a delicious Dairy Queen ice cream always helps beat the hot sun. However, Shelby, a Dairy Queen employee, explains that you don't always have to order off the main menu. There are secret menu items that many people don't know about. In her TikTok video,...
RESTAURANTS・19 DAYS AGO

AMERICA "runs on Dunkin'" and devoted fans of the brand will be the first to remind coffee and donut consumers of that statement. However, even the brand's biggest fans might not know the secrets that can save shoppers money at Dunkin' Donuts locations nationwide. Louise is a college student who...
RETAIL・13 DAYS AGO
Taste Of Home

If You See This Metal Bar at a Restaurant, This Is What It’s For

For those of us who haven’t worked in the foodservice industry, some of the ins-and-outs of restaurant life might confuse us. There are details that leave us scratching our heads, like why hot plates are so hot, why happy hour starts at 4 p.m. and other things that only restaurant managers know.
RESTAURANTS・7 DAYS AGO
CBS News

Heinz Ketchup is getting an eco-friendly makeover: "The ketchup bottle of tomorrow"

According to food and beverage giant Kraft Heinz, even condiment packaging can be sustainable. The company announced this week that it's pairing up with sustainable packaging company Pulpex to develop a "paper-based, renewable and recyclable bottle." The bottle, Kraft Heinz said, is aimed to be made from "100 percent sustainably...
ENVIRONMENT・12 DAYS AGO

Whether you frequent an upscale salon or a local barber shop, you might feel uncertain about how much to tip – and it’s no wonder. Tipping can feel arbitrary, and you might be unsure about your understanding of tipping etiquette. For instance, are there hard and fast rules around tipping, or is it up to your discretion? Is there a going rate? Do barbers and stylists expect a certain percentage? Is cash best? Do you tip salon assistants?
SCOTTSDALE, AZ・28 DAYS AGO
shefinds

2 Pantry Items You Shouldn’t Be Snacking On Anymore—They Cause Fast Weight Gain!

When trying to lose or maintain weight, it’s important to reevaluate what you consume on a daily basis and find healthier alternatives for high-calorie, high-sugar or junk food snacks. With that said, we checked in with health experts to learn ...
WEIGHT LOSS・10 DAYS AGO
shefinds

The One Breakfast Item You Should Never Order From McDonald’s, According To Health Experts

Going out for breakfast once in a while is a fun treat, and there’s no denying how convenient, quick and cheap fast food restaurants can be. If you’re watching your weight, want to become healthier overall as you age or just want to know more about what you are consuming, it’s important to note that some fast food breakfast choices are better than others.
FOOD & DRINKS・25 DAYS AGO
shefinds

Starting your day with a cup of freshly brewed coffee can be one of the best feelings ever. We totally get it–there’s nothing quite like sipping on a steaming cup of joe and getting that caffeine rush. Aside from keeping you awake, energized, and in a good mood, drinking coffee (in moderation, of course) actually has significant health benefits too. As a low-calorie beverage, it’s rich in antioxidants, which protects your cells and reduces your risk of getting heart disease or cancer.
FOOD & DRINKS・28 DAYS AGO
The US Sun

AN Aldi worker has claimed customers use the store to do an activity so gross that it leaves staff sickened. The unnamed employee revealed that a shopper showed no remorse when going to the toilet at the cash register. The Redditor said a customer had an accident on the floor...
GROCERY & SUPERMAKET・13 DAYS AGO
shefinds

As we age, our metabolism may slow due to a loss in muscle mass, under-eating, or other lifestyle changes. Luckily, though, experts say that age alone doesn’t play a very large role; there are many ways to continue to boost your metabolism throughout life, no matter how old you are. What does play a larger role in this process is the food you eat, especially when it comes to breakfast.
WEIGHT LOSS・22 DAYS AGO
The US Sun

LAURA March has never been one for luxuries and has always been careful when it comes to money. But the 72-year-old has admitted she’s now skipping meals and surviving off cheese or peanut butter sandwiches for dinner due to the dramatic rise in the cost of living. Last month...
FOOD & DRINKS・9 DAYS AGO
shefinds

The One Thing You Should Eat For Breakfast If You Want A Flat Stomach, According To Doctors

If you’re looking to get into shape in time for bikini season, it’s important to remember that factors like ample exercise, hydration, and proper nutrition are all essential to losing weight—and more importantly, staying healthy. That mea...
WEIGHT LOSS・13 DAYS AGO
Real Simple

How to Store Bananas So They Don't Turn Brown

Bananas are the potassium-packed, portable fruit we all know and love, but they can be a bit of a nuisance. They can bruise or ripen too quickly or not ripen quickly enough; like avocados, bananas are on their own timeline and we're just along for the ride. With that said, there are ways to store bananas in order to have some control over their ripening process and keep them fresh and delicious for longer periods of time. Keep reading for tips on how to store bananas.
AGRICULTURE・15 DAYS AGO
Upworthy

The Wyoming company Queen Bee LLC voluntarily recalled dozens of candy products sold in the past year. The recall covers honey caramel candy products and chocolates that may contain undeclared allergens like milk and tree nuts. People with allergies or sensitivity to tree nuts and dairy could have severe or life-threatening reactions if they consume the candies.
ECONOMY・16 DAYS AGO
scitechdaily.com

5 Vegetables You Should Never Eat Raw

We all know that vegetables should form part of a healthy diet. Many, such as broccoli, peppers, and carrots, are much better for you when eaten raw. However, some vegetables will leave you sick in bed if you prepare them wrong. So, what food should you always cook to keep yourself healthy?
FOOD & DRINKS・23 DAYS AGO