Australian Open fan favorite Nick Kyrgios made a young fan cry by smashing an errant ball into his stomach, then immediately gave him a racket to apologize 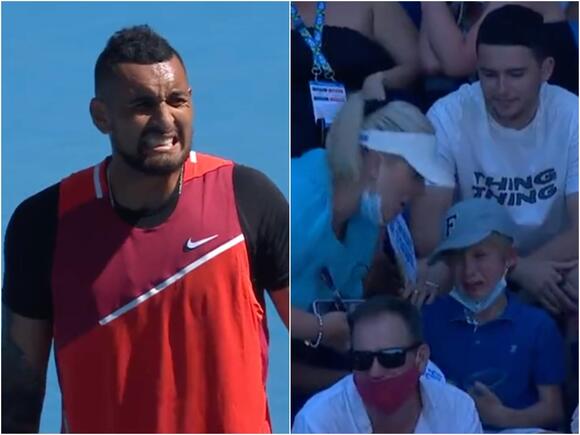 Nick Kyrgios looked on in anguish after accidentally hitting a young fan hard in the stomach with a stray ball at the Australian Open before giving him his racket as an apology.

The incident happened in the first set as Kyrgios and Thanasi Kokkinakis beat New Zealand's Michael Venus and Germany's Tim Püetz in the quarterfinals of the men's doubles on Tuesday.

Following a let call from the chair umpire on a Kokkinakis serve in the fourth game, Kyrgios smashed the ball into the ground in frustration.

Unfortunately, the ball was hit so hard, it bounced into the stand and hit a young fan, which left the boy in tears. Boos subsequently rang out from around the Show Court Arena.

Kyrgios winced after realizing what he'd done and trotted to his bag, grabbed a spare racket, and handed it up to the boy, whose tears turned to a smile.

Kyrgios and Kokkinakis went on to win the match 7-5, 3-6, 6-3 and book their place in the semifinals, where they're set to face third seeds Horacio Zeballos and Marcel Granollers on Thursday.

The Australian duo has enjoyed a remarkable run to the last four, including beating top seeds Mate Pavić and Nikola Mektić in straight sets in the second round.

Following their win over Pavić and Mektić, Kyrgios said the Croats' coaches offered to fight him in the locker room after the match.

Pavić and Mektić were unhappy with the atmosphere at the Show Court Arena for their clash with the home favorites, with Pavić accusing the crowd of being disrespectful. The pair also appeared to be displeased that Kyrgios aimed several shots at their bodies while they were at the net during the match.

"Just letting you know after yesterday's chop fest in doubles my opponents coach and trainer proceeded to threaten to fight in the players gym," Kyrgios tweeted.

"Tennis is a soft soft sport," he added. "All because I moved and hit them with a tennis ball."

Kokkinakis later quoted the tweeting, saying: "That was crazy!! Mans thought it was UFC."

Channel Nine posted footage of Kyrgios and Kokkinakis informing their team of the incident, with retired tennis star Sam Groth saying Kokkinakis texted him during the altercation.

"Thanasi actually messaged me as it was happening," Groth said. "He said Nick got accosted in the locker room by Pavić's fitness trainer.

"Obviously they weren't very happy. They are the No. 1 team in the world, the No. 1 seeds. I guess going down to Thanasi and Nick, they didn't accept what was going on with the crowd, what was happening with Nick.

"I think it is a little bit soft to take it off the court and into the locker room — and not even the players, from someone from the team. It is not necessary."

Charles Barkley is close with both Phil Mickelson and Tiger Woods, and noted one big difference between the two golf superstars.
GOLF・14 HOURS AGO
Insider

Jessica Campbell made history as the first woman to join the coaching staff of a country participating in the men's world hockey championship.
SPORTS・17 HOURS AGO
Insider

Tiger Woods had a playbook of sorts to keep Phil Mickelson from getting too comfortable on the golf course.
GOLF・16 HOURS AGO
Insider

Novak Djokovic's diet is now famously strict and plant-based and he credits it for much of his success.
TENNIS・12 HOURS AGO