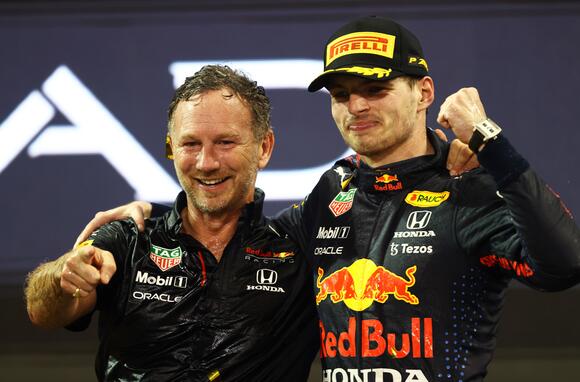 Christian Horner has defended the legitimacy of Max Verstappen ’s maiden Formula 1 world title win, and does not believe it was tarnished by a controversial end to the season at the Abu Dhabi Grand Prix .

After the divisive intervention of race director Michael Masi cleared lapped cars from the Dutchman’s path, Verstappen was able to launch a Drivers’ Championship-winning move and pass Hamilton on the final lap at the Yas Marina Circuit.

While the FIA are investigating the events in Abu Dhabi, neither Red Bull principal Horner nor team owner Dietrich Mateschitz believe that the nature of the victory diminished the measure of Verstappen’s achievement.

Indeed, Horner believes the 24-year-old was very much a deserving winner.

“[Dietrich Mateschitz] felt Max was very deserving. He was very proud of what he’d done and what the team had achieved.

“It was probably the most competitive season in Formula 1 in the last 30 years, and I think, for Red Bull, for Max, for Honda, to come out on top...

“Yes, we got a little bit lucky with the Safety Car at the end of the race, but so much bad luck [had] gone against us throughout the season.

“These things, I’ve always said, tend to balance themselves out over the course of a season, and I think Max, he led more than 50 percent of the laps in the year, more than every other driver combined.

“He had more pole positions, he had more race wins, and for me he was totally deserving.”

The world title was Red Bull’s first since Sebastian Vettel claimed the last of four consecutive Drivers’ Championship victories for the team in 2013.

It is also the first achieved since striking a partnership with Honda in 2019 to supply the team’s engines.

That partnership will be modified in 2022 after the Japanese manufacturers withdrew as a works entity — Honda will develop and manufacture a power unit to be maintained by Red Bull through to the end of the 2024 season.

Red Bull return both Verstappen and teammate Sergio Perez as their two drivers on the grid for the forthcoming campaign.

Novak Djokovic admits he will be fired up by the fiasco of his high-profile deportation from Australia when he targets a record-equalling 21st major on his Grand Slam return at the French Open.  However, his unseemly exit from Melbourne following his refusal to be vaccinated opened the door for Nadal to claim a second Australian Open and 21st Grand Slam crown.
TENNIS・25 MINUTES AGO