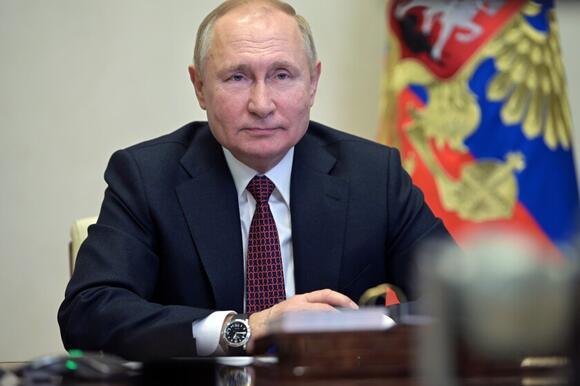 Russia and China oppose “the politicization of sport and demonstrative boycotts” ahead of the Winter Olympics in Beijing, Russian President Vladimir Putin said Tuesday in an address to his country's athletes.

The U.S. is among several countries which have said they will not send politicians or other representatives to next month's Games in a so-called diplomatic boycott, citing concerns over human rights in China. Putin plans to attend the Olympics and to meet with Chinese leader Xi Jinping.

“I consider the main goal of these competitions to attract as many citizens as possible to sport and the strengthening of friendship between peoples. These approaches are shared by the organizers of the upcoming Games, our Chinese friends,” Putin said.

“Together we stand against the politicization of sport and demonstrative boycotts. We support the traditional Olympic values, above all, equality and fairness.”

Instead of the usual ceremony in Moscow before Russian teams depart to the Olympics, Putin addressed athletes by video link as they gathered at training centers across the country.

“I ask you and all of your teammates to rigorously observe all requirements of the organizing committee for the Games and to strictly follow all medical instructions,” he said.

As at last year's Summer Olympics in Tokyo, Russians will be competing without their country's name or flag at the Beijing Games in the fallout from years-long doping disputes. The team will be known as “ROC”, short for Russian Olympic Committee.

Vladimir Putin is so popular in Russia that he has the “political space” to withdraw his forces from Ukraine, said Boris Johnson.The prime minister said the Russian president still has “massive backing” from his own people despite international outrage over the invasion.“The Russian public overwhelming back Putin,” Mr Johnson told Talk TV. “Therefore he has the political margin for manoeuvre from within Russia … Putin has far more political space to back down, to withdraw.”The PM added: “There could come a point when he could say to the Russian people, ‘The military-technical operation that we launched in Ukraine has...
POLITICS・26 DAYS AGO
Newsweek

Russia's foreign minister, Sergei Lavrov, said "there can be no winners in a nuclear war."
POLITICS・27 DAYS AGO
Newsweek

Vladimir Putin’s girlfriend, Alina Kabaeva, has made a rare appearance for her annual 'Alina Festival' on Saturday at Moscow’s VTB Arena, putting rumours that she was hiding in a Swiss chalet or a Siberian bunker to rest. A rhythmic gymnastics festival. Her presence at the patriotic rhythmic gymnastics...
EUROPE・27 DAYS AGO

International order will be thrown out the window if Russia is able to escape consequences over its invasion of Ukraine, US Gen. Mark Milley told CNN.
POLITICS・26 DAYS AGO
Business Insider

Sign up for the Fortune Features email list so you don’t miss our biggest features, exclusive interviews, and investigations. Two Russian oligarchs found dead alongside their families within 48 hours of each other are the latest high-profile executives to die in mysterious circumstances since the beginning of the year.
PUBLIC SAFETY・27 DAYS AGO
americanmilitarynews.com

The intelligence the U.S. shared with Ukraine helped it continue to resist Russian invading forces and even shoot down a transport plane carrying hundreds of Russian troops, a new report revealed. According to current and former U.S. officials who spoke with NBC News on Tuesday, the U.S. provided critical intelligence...
MILITARY・26 DAYS AGO
Business Insider

A superyacht worker claims the vessel’s captain once had to deploy sonic weapons against Kalashnikov-wielding pirates on inflatable boats in the Arabian Sea. The episode was one of many surreal scenes an anonymous worker detailed in a piece published Sunday in The Times of London. The captain, according to...
PUBLIC SAFETY・27 DAYS AGO

Blackout and crisis preparedness expert Herbert Saurugg has recently warned against the complete power grid blackout that could plunge entire Europe into darkness. He predicts a widespread blackout could be lurking in the not too distant future and such an event can cause extremely chaotic conditions worldwide. However, those who are prepared for an emergency can definitely bridge the difficult days well.
ENERGY INDUSTRY・27 DAYS AGO
Newsweek

The mother has questioned whether the soldiers would let her son live even if she did send the money.
MILITARY・27 DAYS AGO
Business Insider

The former F-35 test pilot Billie Flynn told The Aviationist that moving to the "cosmic spaceship" that is the F-35 was too much to ask of MiG pilots.
AEROSPACE & DEFENSE・27 DAYS AGO
ohmymag.co.uk

Yulia Navalnaya is the wife of the sole remaining Russian opposition leader, Alexey Navalny, the most prominent critic of Vladimir Putin's regime. When her husband was poisoned by the Kremlin, 'Navalnaya was a revelation,' as Vanity Fair writes. Who is Alexey Navalny's wife, Yulia Navalnaya?. Yulia was born in Moscow...
CELEBRITIES・26 DAYS AGO
97.1 FM Talk

In an interview with Russian TV, Sergei Lavrov said that Russia is essentially at war with NATO. This rhetoric has some worried that Russia may use nuclear weapons in Ukraine. Lt. Col. Dakota Wood weighed in on the likelihood of this happening.
POLITICS・26 DAYS AGO
The Independent

Kim Jong-un has vowed to bolster North Korea’s nuclear forces at “maximum speed” in a defiant speech during a massive military parade on Monday night.In his speech, Mr Kim also made an open threat that North Korea would use its “nuclear forces” against countries that provoked it.The military parade that started late on Monday night showcased the country’s largest-known intercontinental ballistic missile (ICBM) among other weapons.“We will continue to implement measures aimed at strengthening and developing our country’s nuclear forces at the maximum speed,” Mr Kim told his troops and the crowd gathered for the parade at a Pyongyang...
POLITICS・26 DAYS AGO
The Atlantic

Last Monday, Malcolm Nance, an MSNBC talking head and former sailor in the United States Navy, showed up on the channel by satellite from Ukraine, dressed to kill. He wielded an assault rifle and wore full-camo military dress, including a ballistic helmet, and U.S. and Ukrainian flag patches. About a month ago, he said, he decided he was “done talking.” He then talked about how he had joined Ukraine’s international legion to help the country “fight [against Russia’s] war of extermination—an existential war.” Others have traced a similar journey. Andy Milburn, a journalist and ex-Marine who stopped writing and began training Ukrainians for combat, wrote an article about how he, too, was finished writing articles about Ukraine. “It just started to seem so frivolous,” he wrote, solemnly. “I didn’t want to be an observer.”
MILITARY・26 DAYS AGO
Business Insider

From a first-person perspective, the videos show an anti-tank missile system being fired at Russia armored vehicles seen across a field.
MILITARY・26 DAYS AGO