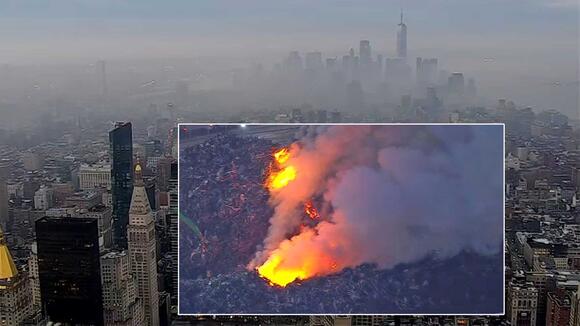 Firefighters battled a large fire at a junkyard in Port Newark that sent smoke across the Hudson River and impacted New York City's air quality. The fire broke out at the Eastern Metal Recycling Terminal on Calcutta Street at around 8:30 p.m. Monday was still burning by 5 p.m. Tuesday. Video from NewsCopter 7 showed heavy flames and thick smoke rising from the scene. Large excavators were moving around the burning debris are firefighters battled the flames. No injuries were reported. Smoke was reported in Newark throughout the night, and is now drifting into Brooklyn and Manhattan, resulting in calls of smoke to the fire department. Air quality has been affected and Meteorologist Jeff Smith says people with underlying conditions and even the average person might want to avoid outdoor activity. Later, the plume should go off-shore when the wind shifts north later Tuesday. ALSO READ | MTA officials address alarming rise in crime, promise more uniformed officers on platforms

The City is working to build a massive 2,200-acre park on the land in phases, starting with projects adjacent to surrounding communities.
NEW YORK CITY, NY・10 HOURS AGO
CNN

MIDTOWN MANHATTAN (WABC) -- Once, not so long ago, pay phones were a common sight all around New York City, and they had been for over a century. But then came cellular phones in the late 1990s, and the number of public phones began to decline. And later, smart phones like the iPhone arrived. And pay phones kept disappearing.
NEW YORK CITY, NY・1 DAY AGO
ABCNY

New Jersey may be known for its beaches and boardwalks, but the Garden State has much more to offer in terms of water activities, and officials on Tuesday launched their inaugural Kicking Off Summer Lakes Tour.
LIFESTYLE・5 HOURS AGO
ABCNY

CONNECT will be launched at nine clinic sites in high-need areas throughout The Bronx, Manhattan, and Brooklyn. They are currently accepting referrals.
NEW YORK CITY, NY・17 HOURS AGO

Authorities say 25-year-old Andrew Abdullah, who has about 20 prior arrests, was the man seen pacing around the subway car before shooting 48-year-old Daniel Enriquez in the chest, killing him.
NEW YORK CITY, NY・1 HOUR AGO
ABCNY

A 19-year-old man is in the hospital after being attacked by another man with a hatchet.
MANHATTAN, NY・13 HOURS AGO

New York City is under a state of emergency as the formula shortage in the nation has parents struggling to find ways to feed their babies.
NEW YORK CITY, NY・1 DAY AGO
ABCNY

Authorities say it started as some sort of collision involving a jet ski.
MANHATTAN, NY・3 DAYS AGO
ABCNY

Police released the first photos of the man suspected of fatally shooting a man in an unprovoked attack on a Manhattan-bound subway train.
MANHATTAN, NY・1 DAY AGO
ABCNY

A federal judge could determine the future of Rikers Island during a hearing Tuesday afternoon on the city's plans to reform the troubled jail amid a possible federal takeover.
NEW YORK CITY, NY・14 HOURS AGO

Israeli flags filled Fifth Avenue on the Upper East Side on Sunday for the 'Celebrate Israel' Parade.
MANHATTAN, NY・2 DAYS AGO
ABCNY

Nurses and technicians at St. Michael's Medical Center in Newark went on strike at 7 a.m. Monday, citing what they call hospital management's blatant disregard for the safety of employees and patients.
NEWARK, NJ・1 DAY AGO
ABCNY

The employees' scaffolding suddenly stopped moving and got stuck. It happened Friday just after 8 a.m. at 712 Fifth Avenue in Manhattan.
MANHATTAN, NY・4 DAYS AGO
ABCNY

Three females were killed in a crash near a catering hall on Long Island, as they left a Sweet 16 birthday party.
ACCIDENTS・1 DAY AGO