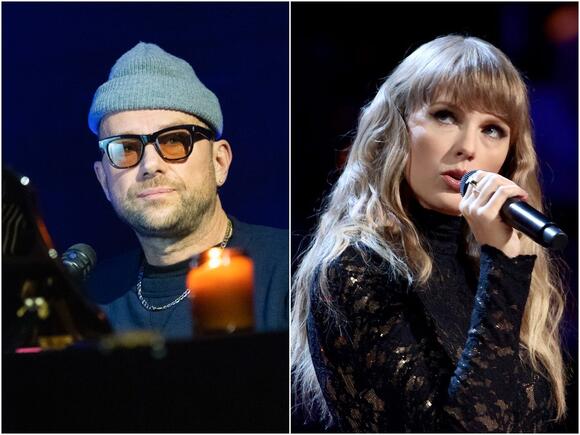 Damon Albarn addressed his comments about Taylor Swift's songwriting and dedicated a song to the Los Angeles Times reporter who published his quotes about Swift in a concert just hours after drawing controversy.

Albarn, best known as the lead vocalist of Blur and Gorillaz, came under fire yesterday for saying that Swift "doesn't write her own songs" in an interview with the Times' pop music critic Mikael Wood.

Later that day, according to Spin magazine's review of Albarn's gig at the Walt Disney Concert Hall in LA , Albarn made reference to his comments before his final song, mentioning Wood.

Spin reported that Albarn said Wood requested the Blur song "Song 2" during the interview "before he cast me into the social media abyss." Albarn then dedicated the song to Wood, Spin reported. Referring to the article, Albarn also reportedly said "you can judge for yourself," "I think I'm becoming old fashioned."

In the Times interview, the English singer had said: "I know what co-writing is. Co-writing is very different to writing. I'm not hating on anybody, I'm just saying there's a big difference between a songwriter and a songwriter who co-writes."

Swift wrote the entirety of her 2010 album "Speak Now" alone and has written many more songs herself. Swift, her fans and her collaborators criticized Albarn's comments.

"I was such a big fan of yours until I saw this," Swift wrote on Twitter. "I write ALL of my own songs. Your hot take is completely false and SO damaging. You don't have to like my songs but it's really fucked up to try and discredit my writing. WOW."

Musicians Aaron Dessner and Jack Antonoff who have produced Swift's songs in the past also tweeted that Albarn's claims were not true. Albarn apologized in a reply to Swift's tweet saying that his comments were "reduced to clickbait."

The Times later encouraged readers to read the full exchange between Wood and Albarn themselves after Albarn called it "clickbait." Insider has reached out to representatives for the LA Times for comment.

Robin Roberts got emotional as she opened up about her relationship with partner Amber Laign, especially in the midst of a challenging health battle. The Good Morning America star made an appearance on The Ellen DeGeneres Show to promote her new book, Brighter By the Day. VIDEO: Robin Roberts enjoys...
CELEBRITIES・26 DAYS AGO
The Independent

Laughter erupted in courtroom after Johnny Depp said he doesn’t watch his own movies and couldn’t recall the question he was asked. “I don’t watch them. I feel better not watching them. What was the question again?” Mr Depp said to laughter from the room. Johnny Depp trial – latest updates“Order in the court, or I will have you removed,” Judge Azcarate said. “Understood? Thank you.”The defamation trial between Mr Depp and Amber Heard began on Monday 11 April in Fairfax, Virginia following Mr Depp’s lawsuit against his ex-wife in March 2019. Mr Depp is arguing that she defamed him...
CELEBRITIES・26 DAYS AGO
Hello Magazine

Princess Eugenie has taken to her Instagram Stories to make an exciting announcement related to The Anti-Slavery Collective, which she co-founded with her best friend Julia de Boinville back in 2017. Resharing a message from the charity organisation, the mother-of-one revealed she was posting "news from my charity". WATCH: Princess...
CELEBRITIES・25 DAYS AGO
The Independent

Mark Hamill has revealed he lost thousands of followers on Twitter in the space of a few hours yesterday (25 April).While the exact reason for the exodus has not been confirmed, his tweet came shortly after it was announced that Elon Musk is set to purchase the social media platform in a deal worth $44bn.Since the news broke, many users of the site (including Jameela Jamil) have announced their intention to delete their accounts, owing to Musk’s reputation as a politically controversial figure. It is believed this could be the reason for Hamill’s loss in followers.“Weird. I just lost...
CELEBRITIES・25 DAYS AGO

Netflix has canceled another one of its major shows, with this one getting the ax after only two seasons. Variety reports that hit sci-fi drama Raising Dion has been dropped by the streamer, following its recent season debut. The news seems to have been revealed by series star Sammi Haney, who shared the news with fans on Instagram. "Sad to say that Raising Dion is CANCELED [sic] Thank you for all of the amazing support we got from all of our wonderful fans!" Haney wrote, in part. "Season 2 was a success, equal to Season 1, even if just looking at how many people watched all of it and wanted a season 3!"
TV SERIES・25 DAYS AGO
ComicBook

After weeks of silence, Chris Rock has finally addressed his now-infamous incident with Will Smith at March's 94th Annual Academy Awards. During another sold-out show at Baltimore's Lyric Performing Arts Center on Friday, Rock directly referenced the slap, but only spent a second on it before moving on with his set.
BALTIMORE, MD・27 DAYS AGO
The Independent

Johnny Depp was asked about a text in which he told Amber Heard to take “no meetings” and “no movies”.The actor took the stand again on Monday (25 April) as part of the defamation case opposing he and Ms Heard in Fairfax, Virginia. He has testified every day since Tuesday (19 April), except when court broke on Friday (22 April) and on the weekend. Mr Depp was first questioned by his own lawyer and has since been cross-examined by Ms Heard’s legal team.Ms Heard’s attorney first read a text from her to Depp, which read: “I’m at a coffee...
CELEBRITIES・26 DAYS AGO

Prince William and Prince Harry's relationship has been strained ever since the bombshell Oprah Winfrey tell-all which was later followed by Harry and his wife, Meghan Markle, abandoning their royal duties and moving to the United States. Now, royal author Robert Jobson is further opening up about what he's learned about The Duke Of Cambridge over the years. According to his sources, William is still very disappointed about the sit-down, and at one point, wasn't sure what the future would hold for their brotherly bond. "To say William felt deeply let down would be an understatement," a source claimed per...
CELEBRITIES・27 DAYS AGO
Entrepreneur

Dorsey, who was CEO of the company until November 2021, took to the platform to pen his thoughts on the new changes.
BUSINESS・25 DAYS AGO
Hello Magazine

Gwyneth Paltrow is a doting mom to two teenage children, Apple and Moses, who she shares with ex-husband Chris Martin. The family are notoriously private, but over the weekend the award-winning actress gave a rare insight into their upcoming plans - and how they are changing things up this year for Mother's Day.
FAMILY RELATIONSHIPS・25 DAYS AGO
Hello Magazine

Kate Hudson has realized one of her dreams and has taken to Instagram to share the incredible news with her 15 million followers. Sharing two pictures of her looking casual in a pair of baggy dip-dyed trousers and a white tank top, and singing into a microphone, the actress announced a surprising career change.
CELEBRITIES・25 DAYS AGO

One of the stars of This Is Us is on the move to a new network in advance of the show's series finale. Deadline reported in March that Chris Sullivan, who plays Toby on the NBC series, will headline a comedy pilot for ABC. His new show is set to be titled The Son In Law.
TV SERIES・25 DAYS AGO
hotnewhiphop.com

50 Cent cast doubt on Megan Thee Stallion's recent comments about not having been in an “intimate relationship” with Tory Lanez, prior to the infamous shooting in July 2020 which left her with gunshot wounds. Megan's comment came during a recent interview with Gayle King, during which she...
CELEBRITIES・25 DAYS AGO
HipHopDX.com

Too $hort has worked with a score of legendary producers throughout his almost 40-year career, from Jermaine Dupri and Lil Jon to Daz Dillinger and DJ Pooh. But one big-name beatsmith he passed up the opportunity to work with was Kanye West. During a recent interview with VladTV, the Bay...
25 DAYS AGO
hotnewhiphop.com

It seems Coi Leray is getting fed up with the drama. She and her father, Benzino, have not seen eye to eye for quite some time, and despite numerous attempts to mend their relationship, they keep ending up back at square one. Yesterday, 50 Cent, whose been feuding with Benzino...
CELEBRITIES・27 DAYS AGO
TheWrap

In a surprise to no one, Kimmel devoted much of his opening monologue on Monday’s “Jimmy Kimmel Live!” to roasting Marjorie Taylor Greene after the far-right congresswoman testified last week in a Georgia court about her role in the Jan. 6 Capitol riot. Kimmel — who was...
WASHINGTON, DC・25 DAYS AGO
PopCrush

90 Day Fiancé: Before the 90 Days star Johnny Chao is showing off a new look on social media. The reality TV star rocked a fresh-faced look on the show. However, Chao debuted some new facial hair in his most recent post on Instagram. More specifically, he grew a beard and mustache.
TV & VIDEOS・25 DAYS AGO
Complex

Benzino is once again airing out some family business. After previously calling 50 Cent the “first hip-hop rat,” and getting into various other conflicts with his daughter Coi Leray, the rapper has now name-dropped both of them in a Twitter tirade. On Sunday, Fif took to Instagram to...
CELEBRITIES・26 DAYS AGO
Insider

Depp is currently suing his ex-wife for defamation following a 2018 essay she wrote in which she said she was a victim of intimate partner violence.
CELEBRITIES・1 DAY AGO