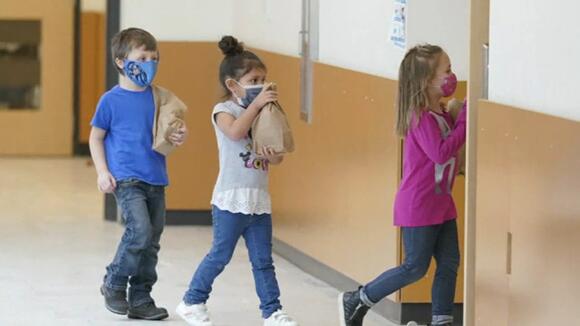 A New York Appellate Judge granted a stay in the state's lawsuit over the COVID-19 face mask mandate, meaning it remains in place while case is appealed -- and schools must enforce it. New York State had quickly filed an appeal after a Supreme Court judge in Nassau Count ruled that the New York's mask mandate couldn't be enforced. The mandate had been reinstituted over concerns about a winter surge of coronavirus cases. "As governor, my top priority is protecting the people of this state," Gov. Kathy Hochul said after the stay was granted. "These measures are critical tools to prevent the spread of COVID-19, make schools and businesses safe, and save lives. I commend the Attorney General for her defense of the health and safety of New Yorkers, and applaud the Appellate Division, Second Department for siding with common sense and granting an interim stay to keep the state's important masking regulations in place. We will not stop fighting to protect New Yorkers, and we are confident we will continue to prevail." RELATED | Bronx DA Darcel Clark to man who shot baby girl: 'You're not going to get away with it'

However, some districts told parents that masks in classes were optional Tuesday, until the appeal was formally filed, leading to confusion in nearly two dozen districts. Following the hearing where the stay was granted, Judge Robert Miller reserved judgement and said a formal ruling would be forthcoming.

A New York Appellate Judge granted a stay in the state's lawsuit over the COVID-19 mask mandate, meaning it remains in place while the case is appealed. Eyewitness News reporter Stacey Sager has the latest details.

The appellate court hearing on the appeal of the judge's ruling has been scheduled for 10 a.m. Friday in Downtown Brooklyn. Assistant Deputy Solicitor General Judy Vale asked for the interim stay, arguing it was within the state health department's "statutory authority" to prevent spread of disease. Judge Miller asked Vale if the state health department has the right, for example, to mandate hand washing in bathrooms. Vale said if it were a public health emergency that required washing hands, then it would. Attorney Chad LaVeglia, who represented the parents who brought the suit, noted the state legislature already amended public health law to add coronavirus, and "what they did not add is this broad sweeping power to dictate laws." He said health department mandates "have no check or balance whatsoever. They can be issued at any time and there are limitations to them. And that's without peoples consent, and that's without the people's elected representatives taking part in the process." Earlier, Nassau County Executive Bruce Blakeman said Governor Kathy Hochul should "stand down" on the state's appeal.

Blakeman said they've had the county attorneys read the State Supreme Court Judge Thomas Rademaker's ruling and say it's "well-founded," adding they believe it will be upheld because "on the law and the facts the judge is absolutely right." The county executive went on to say the governor should, "bend to the will of the people." "This is about choice, if a parent chooses to send their child to school with a mask, that's fine," Blakeman said. "We're not anti-mask. We're anti mandate." Blakeman issued a statement after the appellate ruling. "It is time for the governor to stand down and stop disrespecting the rights of students and parents," he said. "Mask decisions should be made by families and school boards who have their finger on the pulse of their communities. Not Albany politicians. Nassau is normal again, and our county will continue to lead the way as an example for the rest of the state to follow." State Senate Republican leader Rob Ortt also expressed his displeasure over the stay. "I am disappointed the Appellate Division issued a stay that will keep the unconstitutional mask mandate in place while the appeals process plays out in the courts," he said. "We are two years into this pandemic, and it's absurd that this administration is still ruling by mandates - which continue to cause confusion, frustration, and division among New Yorkers. If the governor truly thinks a mask mandate is in the best interests of New Yorkers, she should send a bill to be debated before the Legislature. New Yorkers are fed up - it's time to move beyond one-size fits all mandates and return to a system that provides checks and balances." The Massapequa School District was one of several in the state that told students and teachers that masks were optional Tuesday, joined by at least 19 others that wasted no time ditching their mask mandates. The districts allowing students and staff to unmask include the following: Plainedge, Massapequa, North Merrick, Smithtown, Levittown, East Meadow, Sachem, West Islip, Farmingdale, Franklin Square, Rockville Centre, Sewanhaka, Bellmore-Merrick Central High School Districts, Copiague, Carle Place, Harborfields, Commack, Connetquot, Lindenhurst, and South Huntington. In Manhasset, confusion turned to conflict at the high school as parents disputed whether the mask mandate should still be in effect through an interim stay. Masks remained mandatory in Jericho, Baldwin, Miller Place, Syosset, and all Catholic schools, though there were reports that Syosset and Miller Place were not enforcing the rule. ALSO READ | MTA officials address alarming rise in crime, promise more uniformed officers on platforms

Judge Rademaker ruled on Monday that the mandate issued by the state department of health in December is unconstitutional, saying the health department doesn't have the authority to make new laws. The legislature also stripped the governor's office of its emergency pandemic powers because of former Governor Andrew Cuomo's scandals. The plaintiff in the case said he thought it was time to speak out and take action. "I'm just a father who said, enough is enough and we have to protect our children at all costs," Michael Demetriou said. The state had initially instituted a mask mandate in April 2020 that ended in June 2021 for vaccinated individuals, but Hochul announced in mid-December that it would go back into effect for at least a month. Earlier this month, the state health department said the mandate would be in place until February 1. "My responsibility as governor is to protect New Yorkers throughout this public health crisis, and these measures help prevent the spread of COVID-19 and save lives," Hochul said after Judge Rademaker's ruling. "We strongly disagree with this ruling, and we are pursuing every option to reverse this immediately." The new controversy comes as the omicron wave that gripped New York state appears to be fading. The state averaged around 23,400 new cases of the virus per day in the seven-day period that ended Sunday, down from 74,600 per day during the wave's peak in early January. Hospitalizations are dropping, too, declining 17% statewide in the past 7 days. (The Associated Press contributed to this report.) ---------- * Get Eyewitness News Delivered * Follow us on YouTube * More local news * Send us a news tip * Download the abc7NY app for breaking news alerts

It’s going on two years and we all need to get back to normal. The masks did nothing to prevent omicron or from people catching COVID. Let go and let God. Kids need to be kids. The damage that’s being done is going to last a lifetime.

disgusting. leave them kids alone. they're destroying an entire generation of kids for a disease with a 99.996 survival rate.. do these judges even look at cdc death numbers for children.. they're immune!!

All their little mandates have or are falling apart!!!! I thank the judges and politicians that fought for our freedoms!! 🇺🇸🇺🇸🇺🇸🇺🇸

The New York State Department of Education is canceling its U.S. History and Government Regents exam scheduled for June 1 in the aftermath of the Buffalo mass shooting.
BUFFALO, NY・11 HOURS AGO
ABCNY

New Jersey may be known for its beaches and boardwalks, but the Garden State has much more to offer in terms of water activities, and officials on Tuesday launched their inaugural Kicking Off Summer Lakes Tour.
LIFESTYLE・8 HOURS AGO
ABCNY

Gas in New York is quickly approaching an average of $5 per gallon, increasing again Thursday to $4.91.
NEW YORK CITY, NY・4 DAYS AGO

The CDC is investigating to see if they may be associated with the ongoing nationwide Acute Hepatitis in Children investigation.
KIDS・5 DAYS AGO
ABCNY

Heat Advisory issued ahead of possible record-breaking temperatures this weekend

A heat advisory is also in effect for much of the Tri-State area, with potentially record-breaking temperatures on Saturday and Sunday.
NEW YORK CITY, NY・3 DAYS AGO