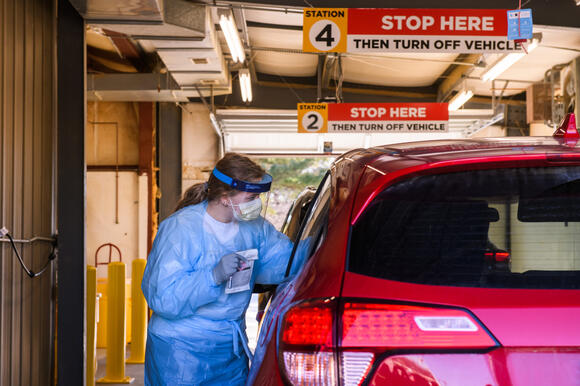 On Tuesdays, the Missouri Department of Health and Senior Services will host a free COVID-19 drive-thru testing site in Columbia.

The testing site is located at the MU North parking lot at 115 Business Loop 70. According to the Columbia/Boone County Department of Public Health and Human Services, individuals should enter using the Garth Avenue entrance.

Nanda Nunnelly owner of the Next-Gen Diagnostics told Abc 17, nearly 200 people had been tested during the early hours of the day.

"It been pretty steady but we expect things to pick back up again later on this afternoon when more people get out and about again," Nunnelly said.

Although many tests were administered this morning, Nunnelly says it's not nearly as many tests that were given out during the holiday season.

"This has probably been our slower weeks since the holiday. We were seeing numbers in the thousands you know thousands coming close to the holidays", Nunnelly said.

DHSS will also host drive-thru COVID-19 testing events at Mizzou North every Tuesday for the next month.

Another testing option is at the American Legion Lot in Jefferson City. That COVID-19 testing site is open on Feb. 13 and 27 as well as March 13 and 27.

In case of inclement weather, the state recommends individuals check to see if a testing event is canceled before attending. The number to call to check for cancellations is  417-362-6398.

If individuals wish to stay at home to test, people can order free kits from the state here. Individuals can also order free up to four COVID-19 tests per address from the federal government here.

Check back for updates related to the COVID-19 pandemic. The post TUESDAY UPDATES: State profile report shows COVID cases are up 115% compared to last week appeared first on ABC17NEWS.
MISSOURI STATE・1 DAY AGO

COLUMBIA, Mo. (KMIZ) A US Air Force member stationed at Wright Patterson Air Force Base in Ohio is facing a rape charge from 2018 in Columbia. A Boone County prosecutor has charged Nathan Repka with a second-degree rape charge. In August 2018, Repka visited the victim and went to a party where he became “blackout The post US Air Force member charged in 2018 rape in Columbia appeared first on ABC17NEWS.
COLUMBIA, MO・8 HOURS AGO
KMIZ ABC 17 News

The man accused of calling in a bomb threat to a Columbia daycare last week remained Tuesday in custody in Kansas, though he has now been ordered to return to Boone County to be tried. The post Columbia bomb threat suspect remains in Kansas; extradition ordered appeared first on ABC17NEWS.
COLUMBIA, MO・1 DAY AGO
KMIZ ABC 17 News

The Missouri Department of Health and Senior Services unveiled it's new drug overdose database. Overdoses are now the leading cause of death among adults aged 18-44 according to DHSS. The post Fentanyl and opioid overdoses surpass heroin overdoses in Missouri appeared first on ABC17NEWS.
COLUMBIA, MO・1 DAY AGO

COLUMBIA, Mo. (KMIZ) Daniel Boone Regional Library (DBRL) workers approved a proposal to unionize. Unofficial results from the Missouri State Board of Mediation show of the 165 eligible voters, 101 workers voted for and 55 others voted against the proposal to unionize under the name 'DBRLWorkersUnited.' The vote to unionize was held from Wednesday through The post Daniel Boone Regional Library workers vote to form first public library union in Missouri appeared first on ABC17NEWS.
COLUMBIA, MO・2 DAYS AGO
KMIZ ABC 17 News

In just a few weeks, Art in the Park will return for the first time since before the pandemic. In July, Columbia hosts the Show-Me State Games followed by other sporting events and festivals like Summerfest. The post Columbia’s economy supported by tourism when college students leave appeared first on ABC17NEWS.
COLUMBIA, MO・2 DAYS AGO
KMIZ ABC 17 News

JEFFERSON CITY, Mo. (KMIZ) A lockdown was lifted Wednesday morning for most of the Jefferson City Correctional Center following a fight among inmates. The incident involved about 25 inmates who were using the yard on Tuesday, according to the Missouri Department of Corrections. A spokeswoman said two JCCC staff members were hurt during the incident The post Lockdown lifted at Jefferson City Correctional Center after fight involving 25 inmates appeared first on ABC17NEWS.
JEFFERSON CITY, MO・18 HOURS AGO
KMIZ ABC 17 News

A deputy at the scene said that gunfire hit multiple homes in the area but couldn't say whether anyone was hurt. The post One hurt, homes damaged in Boone County shooting appeared first on ABC17NEWS.
BOONE COUNTY, MO・1 DAY AGO
KMIZ ABC 17 News