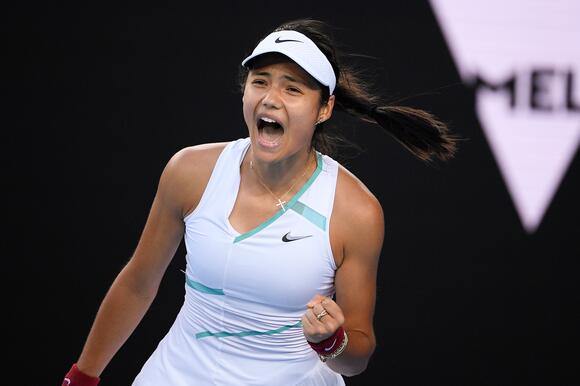 Tim Henman has backed Emma Raducanu to win “many more big titles” and claims she has reasons to be positive despite a second-round exit at the 2022 Australian Open .

Raducanu, playing just her third Grand Slam after winning on the US Open last year, lost in the second round to Danka KoviniÄ‡ at Melbourne Park.

But the 19-year-old has been praised by the former British No1 for her “work ethic” and “attitude”.

“It’s been a pretty challenging start to the year for Raducanu,” Henman told Eurosport. “But I loved her competitive spirit. I thought she did absolutely brilliantly to come through the match against Stephens, and I’m sure that would have given her a big boost of confidence just to get that match under her belt, but then she had another spanner in the works with blisters on her hands [against Kovinic].

“So it’s been hard, but I love her attitude. I love her work ethic. There are going to be lots of opportunities ahead for Raducanu. I think it’s a similar conversation with a lot of young players like Jannik Sinner or Carlos Alcaraz.

“We need to be patient. Emma is the least experienced of all these players, she’s barely played a handful of professional tournaments and is only in her third Grand Slam.

“Yes, she’s already won one, but she certainly needs time to develop and learn her trade and improve all aspects of a game and if she does that, then sure she’s going to win many more big titles in the future.”

Raducanu will now work on her fitness in the coming weeks with the prospect of playing tournaments in the Middle East before switching attention to WTA 1000 events in Indian Wells and Miami in March.

Former Wimbledon and French Open champion Simona Halep revealed she suffered a panic attack during her second-round defeat to Zheng Qinwen at Roland Garros.Romanian Halep, the 19th seed, was leading her teenage opponent from China when she called for the doctor.After falling to a 2-6 6-2 6-1 defeat, Halep said: “I didn’t expect (it) because it was just a panic attack. It happened.🗣️ "It was a difficult one"No.19 @Simona_Halep reflects on her elimination today#RolandGarros pic.twitter.com/HobuVPihKc— Roland-Garros (@rolandgarros) May 26, 2022“I didn’t know how to handle it, because I don’t have it often. Yeah, I don’t really know why it happened,...
TENNIS・2 HOURS AGO
The Independent

Dan Evans has no regrets after his French Open challenge ends

Dan Evans shrugged off being booed at the end of his French Open second-round defeat, saying: “I couldn’t care less.”British number two Evans, feeling the effects of a chest infection, put in a shift of almost three-and-a-half hours against 23-year-old Swede Mikael Ymer, only to lose in four sets, 6-3 3-6 6-2 6-2.When Ymer brought up match point Evans, who had clearly had enough, just swatted his service return into the net.The half-hearted shot was met with jeers from the crowd on a packed Court Six, but Evans was unrepentant.Dan Evans loses out in the 2nd round of @rolandgarros #BackTheBrits...
TENNIS・4 HOURS AGO