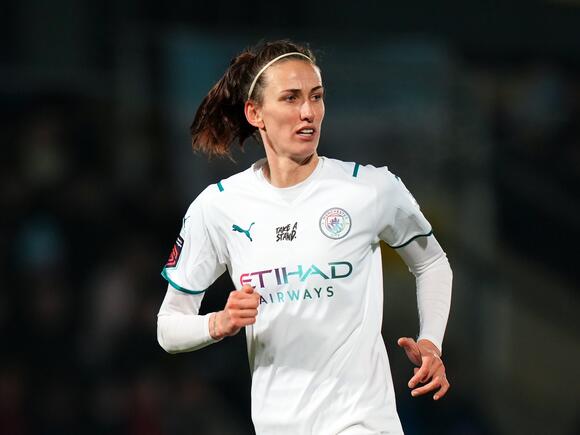 England midfielder Jill Scott has joined Aston Villa on loan from Manchester City for the remainder of the Women’s Super League season.

The 34-year-old has made almost 200 appearances for City over the last eight-and-a-half years and won her 150th senior international cap against Northern Ireland in February last year.

Villa manager Carla Ward told the club’s official website: “When we heard of Jill’s availability, it was a no-brainer.

“To have the chance to acquire one of England’s most decorated footballers is a chance we couldn’t turn down.

“Jill will bring so much to this group, not only on the pitch, but I see her having a huge impact off it too.

“We have some hugely exciting young talents coming through, so for them to learn from someone of Jill’s stature will be massive.”

Former Sunderland player Scott, a WSL title winner with City in 2016 who also has three FA Cup successes to her name, spent the second half of last season on loan at Everton.

A statement on City’s official website said: “Everybody at City would like to wish Jill the very best during her loan spell and for the remainder of the season.”

Manchester City will win the Premier League title if they beat Aston Villa at home on the final day of the season.Pep Guardiola’s team have been pushed to the end by Liverpool but come into the final day of the campaign with the title in their hands.Aston Villa manager Steven Gerrard will be out to win Liverpool the Premier League crown and spoil the party at the Etihad.But if City get over the line they will secure a fourth Premier League title in five seasons under Guardiola.Here’s everything you need to know ahead of the game.When is Manchester City...
PREMIER LEAGUE・1 HOUR AGO
The Independent

Mikel Arteta plans to stand by Arsenal’s kids even if they miss out on Champions League football this weekend.The Gunners go into the final day of the Premier League season needing to beat Everton at home and hoping Norwich can stun Tottenham at Carrow Road to secure an unlikely fourth-place finish.Arsenal had been in the driving seat to clinch Champions League football at the beginning of May when they moved four points clear of Spurs but back-to-back defeats means Arteta’s young side look set to have to settle for the Europa League.Many critics have suggested more experience is required in...
PREMIER LEAGUE・12 HOURS AGO
The Independent

Leicester City vs Southampton prediction: How will Premier League fixture play out today?

Southampton’s torrid run of form has gone somewhat under the radar over the last couple of months due to the fact they had basically already secured Premier League safety.Ralph Hasenhuttl’s men have won just one league game since the end of February - which came in a 1-0 victory over Arsenal in mid-April.It has been a poor end to the campaign for Saints and anything but a win over Leicester will mean it is their worst points tally for three seasons.Meanwhile, Leicester are looking to hold onto their position in the top half after an up and down finish to...
PREMIER LEAGUE・1 HOUR AGO
The Independent

Is Brentford vs Leeds United on TV today? Kick-off time, channel and how to watch Premier League fixture

Leeds United’s Premier League survival hopes will come to the final day of the season as they travel to Brentford. With Everton now save from relegation and Burnley’s hopes in their own hands following their draw at Villa, Leeds must better Burnley’s result to have a chance at survival. Leeds salvaged a draw at home to Brighton last weekend as Pascal Struijk’s late equaliser earned the hosts a point but Jesse Marsch’s side are winless in five. Brentford have enjoyed a brilliant first season in the Premier League under Thomas Frank and could even finish in the top half...
PREMIER LEAGUE・1 HOUR AGO

The end of the Premier League season will mark significant personnel changes for both Crystal Palace and Manchester United, as they meet at Selhurst Park on Sunday evening.Patrick Vieira will lose key midfielder Conor Gallagher after this week as his loan spell comes to an end, following a great season which saw him break into the England set-up, but there remains plenty of cause for excitement for the Eagles heading into next year.Man United will be starting yet another rebuild though, with Erik ten Hag replacing interim boss Ralf Rangnick after this fixture and ready to overhaul a squad which...
PREMIER LEAGUE・1 HOUR AGO
The Independent

As I sat in the seats of Wembley Stadium for the Women’s FA Cup Final on Sunday 15 May, I was overjoyed to see the passionate crowds of young women and girls who were undoubtedly inspired by the talent on the pitch.As a childhood football fan who often struggled to find physical spaces to play without fear of sexism, I felt disconnected to the game for many years. This made watching as Chelsea went on to win the cup all the more exciting and memorable.However, I couldn’t help but notice that the stadium was not adorned with sponsored advertising from...
UEFA・1 HOUR AGO
The Independent

Ada Hegerberg played a starring role as Lyon stunned favourites Barcelona to win their eighth Women’s Champions League title in Turin.The Norwegian scored one and set up another in a 3-1 win over the Catalan giants, who arrived as defending champions and having lost a solitary match all season.Lyon made a magnificent start when Amandine Henry fired a superb 35-yard effort past Barcelona goalkeeper Sandra Panos to give the French side the lead with just six minutes on the clock.Barca were visibly wilting under the pressure and Hegerberg doubled Lyon’s lead in the 23rd minute when she peeled off her...
SPORTS・9 HOURS AGO
The Independent

On this day in 2011: Chelsea sack Carlo Ancelotti one year after domestic double

Chelsea sacked Carlo Ancelotti on this day in 2011, one year after he had led the club to a domestic double.The Italian, then 51, won the Premier League title and the FA Cup with Chelsea in 2010, but was ruthlessly dismissed by club owner Roman Abramovich after failing to deliver a trophy the following season.The Blues finished second, nine points adrift of Manchester United, in the title race, after exits in the Champions League, FA Cup and League Cup and Ancelotti fell victim to his earlier success.Chelsea finished empty handed for the first time in three years and a club...
SOCCER・6 HOURS AGO