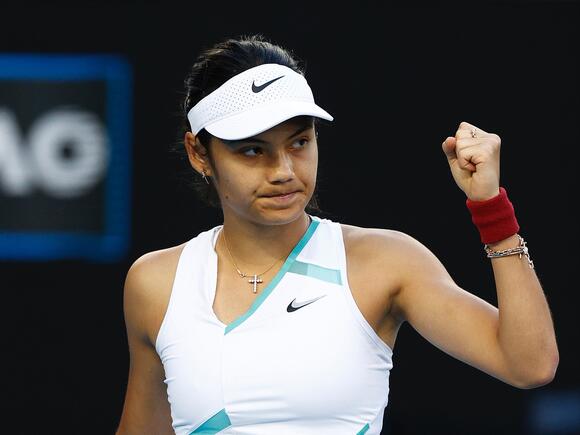 Emma Raducanu is set to climb to a career-high 13th in the WTA rankings despite a second-round exit at the Australian Open .

Raducanu, hampered by a blister on her right hand, was surprisingly beaten by Montenegrin qualifier Danka Kovinic to end her debut appearance in Melbourne.

However the ranking points earned by Raducanu should allow her to be boosted beyond her current ranking of 18th in the world when the WTA rankings are refreshed on Monday at the conclusion of the tournament.

Several players ahead of her, including defending champion Naomi Osaka, will lose ranking points carried over from last year’s edition of the Australian Open after their own early exits in this year’s competition, and Raducanu is set to slot in as the new world number thirteen.

Her high ranking is powered by the remarkable triumph on debut at the US Open , which followed an impressive fourth-round performance at Wimbledon.

The 19-year-old should climb further — Raducanu does not have any ranking points to defend in the first half of the season having not competed at WTA Tour level during the early months of 2021, so will only improve her total.

Raducanu has indicated that she may now spend some time building her fitness up after her preparations for the Australian Open were disrupted by a period in isolation after a positive Covid test, but the teenager knows that she must play more tournaments to improve her chances at the year’s next Grand Slam, the French Open in May.

“Playing loads of matches is definitely different,” Raducanu explained after defeat to Kovinic. “It’s something that you can’t really replicate in practice, but also because of the lack of practice I have been doing, I can’t really tell because it’s my first real test with it.

“I feel like I’m going to for sure get fit just playing tournaments week in, week out. Like I was just on court for two hours and 40 minutes [against Kovinic], so that’s got to do something for my fitness. But I really feel like I need to dedicate some time to it, as well.

“I know that after this I’ve got a few weeks where I want to try and do as much of catchup as possible in terms of like fitness and my pre-season, because I missed it actually in December.

“So I’ll try and do a bit of work there. There is not much time, but there are some tournaments in Mexico or the Middle East, and it’s just a matter of that before Indian Wells.”

Former Wimbledon and French Open champion Simona Halep revealed she suffered a panic attack during her second-round defeat to Zheng Qinwen at Roland Garros.Romanian Halep, the 19th seed, was leading her teenage opponent from China when she called for the doctor.After falling to a 2-6 6-2 6-1 defeat, Halep said: “I didn’t expect (it) because it was just a panic attack. It happened.🗣️ "It was a difficult one"No.19 @Simona_Halep reflects on her elimination today#RolandGarros pic.twitter.com/HobuVPihKc— Roland-Garros (@rolandgarros) May 26, 2022“I didn’t know how to handle it, because I don’t have it often. Yeah, I don’t really know why it happened,...
TENNIS・2 HOURS AGO
The Independent

Dan Evans has no regrets after his French Open challenge ends

Dan Evans shrugged off being booed at the end of his French Open second-round defeat, saying: “I couldn’t care less.”British number two Evans, feeling the effects of a chest infection, put in a shift of almost three-and-a-half hours against 23-year-old Swede Mikael Ymer, only to lose in four sets, 6-3 3-6 6-2 6-2.When Ymer brought up match point Evans, who had clearly had enough, just swatted his service return into the net.The half-hearted shot was met with jeers from the crowd on a packed Court Six, but Evans was unrepentant.Dan Evans loses out in the 2nd round of @rolandgarros #BackTheBrits...
TENNIS・5 HOURS AGO
The Independent

F1 race calendar 2022: Full list of dates for every grand prix in biggest season ever

Formula 1 is in the midst of the biggest season in its 72-year history over 2022 with 23 races planned at top class racing venues around the world.The series has been on an expansion drive ever since owners Liberty Media purchased it from Bernie Ecclestone back in 2017, with focus placed on key financial territories including the Middle East and North America.All but one of the tracks scheduled to host a grand prix in 2022 have done so far before. This season brings a brand new race in the United States onto the calendar in May, as the Miami...
NFL・2 HOURS AGO
The Independent

British sailor Pip Hare has unveiled her bid to compete in the Vendee Globe solo round-the-world race for a second time and said she hopes she can be “more competitive”.The 48-year-old caught the public’s imagination when she completed the 2020/21 race – one of the toughest on the sailing calendar – before returning to a hero’s welcome in Poole, Dorset.She even received a message from Hollywood actor Russell Crowe on her birthday during the race, which she completed in 95 days, 11 hours and 37 minutes while competing in the event’s second oldest boat.Now the yachtswoman, only the eighth woman...
SPORTS・2 HOURS AGO