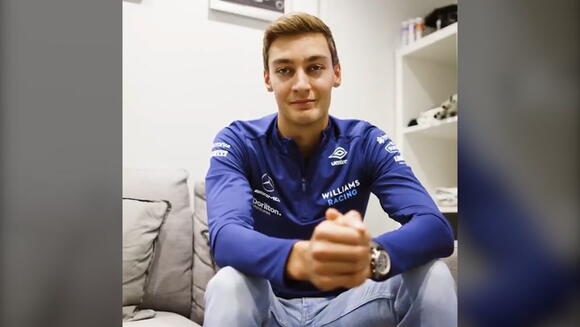 Toto Wolff has suggested that people are wrong to question how Lewis Hamilton will handle his new partnership at Mercedes with George Russell .

Russell has joined the German team from Williams and will replace Valtteri Bottas as the second Mercedes driver on the grid in 2022.

While the seven-time world champion enjoyed a strong relationship with Bottas, his combination with previous teammate Nico Rosberg did not always work smoothly.

It has been suggested that Hamilton, whose future is not yet fully certain after the controversial end to the 2021 F1 season, and the ambitious Russell could clash.

However Mercedes boss Wolff has suggested that such fears are significantly overblown and an unfair reflection of Hamilton’s character.

“I would wish that we had two lightning-fast drivers fighting for victory,” Wolff told Auto Motor und Sport on his hopes for the new pairing.

“And if not, then we need these drivers to get our car back on the winning track.

“The measure of Lewis is often wrongly questioned. Even after the events in Abu Dhabi, he immediately congratulated Max [Verstappen].

“Lewis only wants one thing: fair competition on the track. We will deliver that.”

Russell is yet to win a Grand Prix but achieved a career-best second-placed finish at the Belgian Grand Prix last season, beating Hamilton to the second step of the podium behind race victor Verstappen.

The 2018 Formula 2 champion has been tipped as a rising star who could contend quickly at Mercedes.

Hamilton is said to be weighing his options as he awaits the conclusions of an FIA investigation into the events of the season-ending Abu Dhabi Grand Prix, and has not yet publicly committed to returning ahead of the 2022 season start in Bahrain in March.

The first round of preseason testing in Barcelona is now less than a month away, and Mercedes are set to launch their car for the season on 18 February.

F1: What time is Spanish Grand Prix today and how can I watch?

Formula 1 is back for the sixth round of the 2022 season with the Spanish Grand Prix.Last year’s winner Lewis Hamilton has endured a testing season with Mercedes lagging behind Ferrari and Red Bull.Hamilton and George Russell will hope the W13 has been upgraded to produce in Barcelona. Meanwhile, Charles Leclerc and Max Verstappen continue to battle it out at the top of the drivers’ standings.Here’s everything you need to know ahead of the race.When is the Miami Grand Prix?The Spanish Grand Prix at Circuit de Barcelona-Catalunya is due to begin at 2pm BST on Sunday 22 May.How can...
MOTORSPORTS・30 MINUTES AGO
The Independent

Charles Leclerc bounced back from a spin to put his Ferrari on pole position for the Spanish Grand Prix.Championship leader Leclerc lost control of his Ferrari through the chicane on his first attempt in Q3 at a sweltering Circuit de Catalunya on the outskirts of Barcelona to leave him sweating.But the Monegasque kept his cool with his last effort to deliver an impressive lap under pressure and beat rival Max Verstappen by three-tenths of a second.Verstappen, who trails Leclerc by 19 points, complained he had no power on his last attempt. Carlos Sainz finished third in the other Ferrari, with...
MOTORSPORTS・30 MINUTES AGO
The Independent

Tony Brooks: Formula One legend who just missed out on the top prize

Very much the quiet and understated hero of British motorsport during one of its most dangerous and deadliest eras, Tony Brooks, who has died aged 90, was the first British racing driver to win a Grand Prix in a British car for 32 years and the very last of those Formula One winners who competed during the 1950s. Fascinated by speed and fired by an underlying and hugely competitive nature, Brooks not only helped break the Italian domination of the sport but in tandem with fellow driver Stirling Moss, helped usher in a homegrown revival in Formula One racing....
MOTORSPORTS・10 HOURS AGO