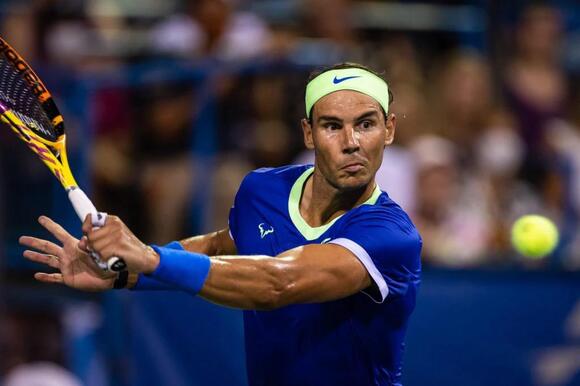 Rafael Nadal is through to the semifinals of the Australian Open, but it wasn’t easy.

“A very tough day, very warm,” Nadal said. “Honestly I didn’t practice for it. I was a little bit lucky at the beginning of the fifth.

“I started to feel not very well in my stomach so I just asked if they can do something. We went inside and they … checked that everything was all right on my body, and then I took some tablets. I was lucky that I was serving great in the fifth.”

Nadal’s semifinal opponent will be either seventh-seeded Matteo Berrettini of Italy or 17th-seeded Gael Monfils of France.

Nadal, 35, is seeking his record 21st major single title, which would break a tie with Novak Djokovic and Roger Federer. Djokovic was deported from Australia ahead of the tournament amid controversy over his unvaccinated status, while Federer decided to sit out the event amid ongoing knee problems.

Shapovalov fell just short of matching the best major result of his career, an appearance in the Wimbledon semifinals last year. His only other Grand Slam quarterfinal result came at the 2020 U.S. Open.

Shapovalov wound up with more winners than Nadal, 53-41, but that was more than offset by his higher total of unforced errors, 51-28.

In the decisive fifth set, Shapovalov couldn’t take advantage of a break point the first game and two more break opportunities in the third game. In between, Nadal broke serve, and he soon built a 3-0 lead that sent him on the way to the win.

The Amundi Evian Championship is raising the prize money for the 2022 event to $6.5 million, with the winner taking
GOLF・14 HOURS AGO
Sportsnaut

Ekaterina Makarova of Russia recovered from a tough opening set to produce a 1-6, 6-3, 6-2 victory over Romania’s Sorana
TENNIS・8 HOURS AGO

In the final day of Legends Stage action at the PGL Major Antwerp in Belgium on Tuesday, three teams —
VIDEO GAMES・7 HOURS AGO