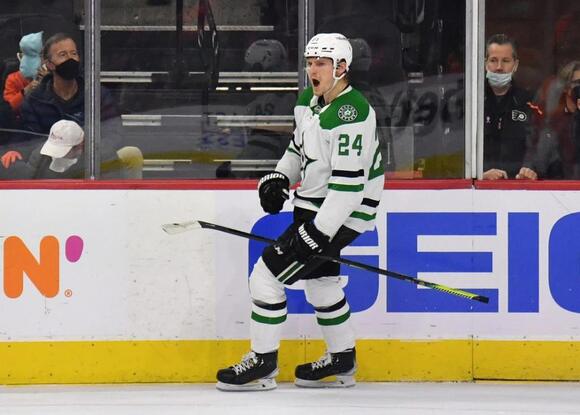 The Dallas Stars chase their fourth consecutive win when they visit the New Jersey Devils on Tuesday night.

Dallas travels up the Jersey Turnpike after posting a 3-1 win over the Philadelphia Flyers on Monday night.

Roope Hintz had a goal and an assist and rookie Jacob Peterson put Dallas ahead for good when he made it 2-1 late in the third period with his second goal in four games.

“Jacob is sneaky good,” Stars coach Rick Bowness said. “You watch him get the puck and he hangs onto the puck and he tries to make plays. He doesn’t panic with it, he’s very good with it, his head is up. He’s a smart hockey player.”

Dallas’ Jake Oettinger made 27 saves in a bounce-back game. He had allowed a total of nine goals while being pulled from his previous two starts.

Dallas forward Denis Gurianov, who had eight points (two goals, six assists) in his previous seven games, was benched for the final 9:38 of the third period.

“Wasn’t very good,” Bowness said. “Simple as that. Didn’t deserve to be out there. Put Riley (Damiani) on that line and that line started to go.”

If Braden Holtby starts in goal Tuesday for Dallas, he would be facing a familiar Metropolitan Division foe from his days with the Washington Capitals. Holtby is 17-4-3 with a 2.03 goals-against average and .924 save percentage vs. New Jersey.

The Devils have lost four of their past five games, including a 3-2 defeat against the Los Angeles Kings on Sunday.

The bright spot was Jesper Bratt, who scored both goals. It was the third two-goal game of his career and the first since Oct. 30, 2019, against the Tampa Bay Lightning.

Bratt has seven points (four goals, three assists) during a five-game point streak. Overall, he has 13 goals (his career best is 16) and a career-high 36 points through 37 games. He gave the Devils an early 1-0 lead against Los Angeles when he scored on a breakaway.

“His speed is so dangerous,” New Jersey coach Lindy Ruff said of Bratt. “On the first goal, he got in behind them. We stretched them out, made a good play to get the puck up to (Bratt) and just his quickness alone created the goal. We’ve seen a lot of those goals this year, where he’s been able to stretch the ice and get behind the opposition.”

Jon Gillies made 34 saves for New Jersey while playing the second of back-to-back games. Ruff said goalie Mackenzie Blackwood was day-to-day but could return against the Stars.

The Devils had leads of 1-0 and 2-1 against the Kings but couldn’t add on. Los Angeles had the majority of chances in the third period and scored late for the win.

“(The Kings’) energy just seemed to be just a little bit better than ours,” Ruff said. “We couldn’t quite knock enough people off the puck. Couldn’t quite get to the front of the net. … They did a real good job physically, boxing out and finishing the man.”

Trailing 2-1 in a playoff series is not uncharted territory for the Calgary Flames. They were in this exact situation
NHL・21 HOURS AGO
Sportsnaut

Now that the 2021-22 postseason is in full bloom, it’s time to check in on our NBA Playoff predictions with
MEMPHIS, TN・22 HOURS AGO
Sportsnaut

The Miami Heat are attempting to take a 3-1 series lead on the road in Game 4 of their Eastern
BOSTON, MA・18 HOURS AGO

The NHL season officially started back on October 12. In this article, we track all the NHL games today as
NHL・8 HOURS AGO
Sportsnaut

Veteran forward Otto Porter Jr., who has played significant minutes as the Golden State Warriors have built a 3-0 lead
NBA・45 MINUTES AGO
Sportsnaut

Two notable hitting streaks and a winning streak will be on the line Tuesday night when the St. Louis Cardinals
SAINT LOUIS, MO・8 HOURS AGO
Sportsnaut

The St. Louis Blues and Colorado Avalanche will have to work through major injury concerns as their second-round Western Conference
SAINT LOUIS, MO・1 DAY AGO

Liberty, Lynx both looking for a lift

This isn’t the start the New York Liberty envisioned, but a four-game losing streak, including consecutive blowout losses, and a
MINNEAPOLIS, MN・22 HOURS AGO
Sportsnaut

Down 2-0 in the Western Conference finals, the Dallas Mavericks have an aggressive game plan for Game 3 at home
SAN FRANCISCO, CA・2 DAYS AGO
Sportsnaut

Bulls, Pistons to play in Paris next season

The Chicago Bulls and Detroit Pistons will play a regular-season NBA game in Paris next season. The game will be
DETROIT, MI・3 HOURS AGO
Sportsnaut

Even without Jimmy Butler (knee) in the mix for the second half, the Miami Heat were able to take out
MIAMI, FL・1 DAY AGO
Sportsnaut

The NBA fined the Dallas Mavericks $100,000 on Sunday for continuing to violate league rules on bench decorum. The latest
DALLAS, TX・2 DAYS AGO
Sportsnaut

If recent results and the opener of a three-game series are any indication, the Pittsburgh Pirates and visiting Colorado Rockies
DENVER, CO・11 HOURS AGO