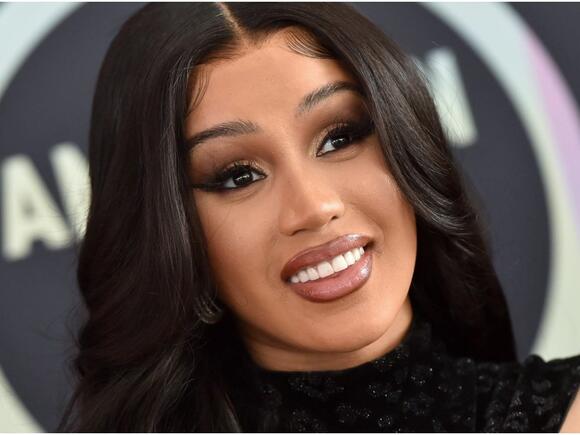 A federal jury sided with rapper Cardi B in her defamation lawsuit against YouTuber Latasha Kebe on Monday, saying that Kebe must pay the Bronx-native at least $1.25 million, according to court documents.

Cardi B alleged in a 2019 lawsuit that Kebe, who goes by Tasha K and has 1 million subscribers on her channel unWinewithTashaK , became "obsessed" with her and ran a "malicious campaign" about her that included falsely accusing Cardi B of testing positive for herpes and having substance abuse issues.

During the trial that began earlier in January in Georgia, both women took the stand.

Representatives for Cardi B and Kebe could not immediately be reached for comment.

The complaint said that Kebe intended to capitalize on the false information and knew posting about Cardi B "would draw substantially more viewers to her content than she typically garners." At the time of the jury's decision, Kebe hadn't posted a video about the rapper in nearly six months.

Throughout the course of the suit, Kebe countersued for $3 million, alleging that Cardi B, whose real name is Belcalis Almánzar, had sent fans to harass her. A judge dismissed the suit saying there was "no evidence" of the claim.

According to YouTube's terms of service , the platform says it is not responsible for "the Content submitted by any user, or for the defamatory, offensive, or illegal conduct of any user."

Under its defamation complaint requirements , it states YouTube "will only consider legal complaints where we've been notified by the party in question or their authorized legal representative."

YouTube could not immediately be reached for comment on whether the videos would remain on the platform.

During the case, US District Judge William Ray asked the Center for Women's Pelvic Health at UCLA to send the rapper's HIV and herpes test results and medical records.

In November 2021, Ray determined the records were "not helpful" to Kebe's case and proved Cardi B right, Rolling Stone reported . As part of the verdict, Kebe was ordered to pay $250,000 in medical damages.

Tasha's networth is 1.5 million so you can imagine this lawsuit just brought her back down to reality. spreading false information is wrong and Cardi should also get the money she made through ads on the video that started the issues.

I dont like Cardi B or her music but good for her. You mess with the bull you get the horns. I also appreciate Cardi B for paying for the funerals from the NY blaze.

Gene Simmons of Kiss and several other musicians are beginning to react to the news of Elon Musk’s purchase of Twitter for $44 billion, questioning Musk’s desire for more “free speech” and how it may impact the spread of more hate and misinformation. “Fantastic news, at...
BUSINESS・23 DAYS AGO
Newsweek

Heard was shown choosing not to sit with her attorney when her questioning concluded and instead exited the courtroom.
FAIRFAX, VA・1 DAY AGO
inputmag.com

Elon Musk, the world’s wealthiest man, who thinks tunnels are immune to natural disasters, is purchasing Twitter. The company confirmed on Monday afternoon that it had accepted the billionaire’s offer. “Twitter, Inc. today announced that it has entered into a definitive agreement to be acquired by an entity wholly owned by Elon Musk, for $54.20 per share in cash in a transaction valued at approximately $44 billion,” reads the official press release. “Upon completion of the transaction, Twitter will become a privately held company.”
BUSINESS・24 DAYS AGO
Insider

Todd Chrisley's' lawyer said in court that much of their reality show is fake: 'It's all part of the sizzle'

In Todd and Julie Chrisley's federal fraud case, Attorney Bruce Morris said the the couple's TV persona and press interviews are "part of the act."
ATLANTA, GA・2 DAYS AGO

Mark Hamill has revealed he lost thousands of followers on Twitter in the space of a few hours yesterday (25 April).While the exact reason for the exodus has not been confirmed, his tweet came shortly after it was announced that Elon Musk is set to purchase the social media platform in a deal worth $44bn.Since the news broke, many users of the site (including Jameela Jamil) have announced their intention to delete their accounts, owing to Musk’s reputation as a politically controversial figure. It is believed this could be the reason for Hamill’s loss in followers.“Weird. I just lost...
CELEBRITIES・23 DAYS AGO
OK! Magazine

Ryan Seacrest is weighing in on the ongoing court battle between the Kardashian-Jenner family and Blac Chyna.According to a new report from Radar, the TV producer made some bombshell claims in his deposition, which the famous family is trying to get blocked from the jury. As reported by the outlet, Seacrest — who is scheduled to take the stand in the trial — shockingly revealed in his deposition that he wanted Chyna's show with Rob Kardashian, Rob & Chyna, to move forward, despite the Kardashian-Jenner squad's claim that there was fear over Rob's safety as a result of the exes'...
CELEBRITIES・23 DAYS AGO
hotnewhiphop.com

50 Cent cast doubt on Megan Thee Stallion's recent comments about not having been in an “intimate relationship” with Tory Lanez, prior to the infamous shooting in July 2020 which left her with gunshot wounds. Megan's comment came during a recent interview with Gayle King, during which she...
CELEBRITIES・23 DAYS AGO
Insider

According to Whitney Henriquez, Johnny Depp held Amber Heard's hair in one hand and repeatedly smacked her with the other.
FAIRFAX, VA・1 DAY AGO

"I've never edited a photograph," Heard responded when asked if she altered a picture showing bruises on her face.
FAIRFAX, VA・2 DAYS AGO
hotnewhiphop.com

It seems Coi Leray is getting fed up with the drama. She and her father, Benzino, have not seen eye to eye for quite some time, and despite numerous attempts to mend their relationship, they keep ending up back at square one. Yesterday, 50 Cent, whose been feuding with Benzino...
CELEBRITIES・25 DAYS AGO
The Associated Press

LOS ANGELES (AP) — Kim Kardashian testified Tuesday that she had no memory of making any attempt to kill the reality show that starred her brother Rob Kardashian and his then-fiancée Blac Chyna. But she acknowledged demanding that Chyna be kept off of “Keeping Up With the Kardashians” after hearing Chyna had abused her brother.
LOS ANGELES, CA・23 DAYS AGO
Insider

Todd and Julie Chrisley lived extravagantly on $30 million in loans they lied 'through their teeth' to get: Feds

In her opening statement, an assistant US attorney said Todd and Julie Chrisley made up documents to "get whatever they want whenever they want it."
ATLANTA, GA・2 DAYS AGO

#Defamation Lawsuit#Hiv#Cardi B And
Entrepreneur

Dorsey, who was CEO of the company until November 2021, took to the platform to pen his thoughts on the new changes.
BUSINESS・23 DAYS AGO
Insider

Amber Heard was responding to a photo presented in court on Monday of lines of cocaine next to a tampon applicator on a table.
CELEBRITIES・2 DAYS AGO
Insider

Johnny Depp's lawyer laughed and didn't answer when asked if they were dating, video shows

A video circulating online showed a reporter asking Camille Vasquez to comment on speculation that she was dating her client Johnny Depp.
FAIRFAX, VA・21 HOURS AGO

Amber Heard's lawyers have a good chance of winning over the jury despite being mocked on social media, legal experts say

Heard's lawyers have been mocked on social media, but experts say this won't necessarily be reflected in the jury's verdict.
CELEBRITIES・1 DAY AGO
Insider

Each episode follows the rapper as she tries a new activity, from tattooing her husband to playing football with Megan The Stallion.
CELEBRITIES・9 HOURS AGO
Insider

From Quannah Chasinghorse's Indigenous jewelry to Joy Crookes' lehenga, here's how celebrities have paid tribute to their heritage on the red carpet.
TENNIS・15 HOURS AGO
Insider

Melanie Inglessis testified Wednesday that she witnessed injuries on Heard's face that she helped cover up for a 2015 TV appearance.
CELEBRITIES・1 DAY AGO