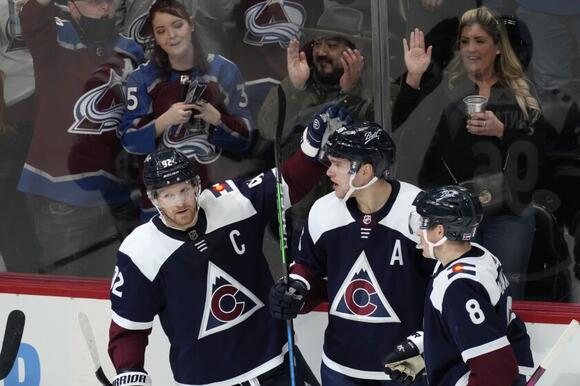 Nazem Kadri and Mikko Rantanen scored, Pavel Francouz made 23 saves for his third career shutout and the Colorado Avalanche beat the Chicago Blackhawks 2-0 on Monday night to extend their franchise-record home winning streak to 16 games.

It was the seventh straight victory overall for the Avalanche, who tied the 1976 Boston Bruins for the fifth-longest home winning streak in NHL history. “It’s just a feather in our cap for the guys,” Colorado coach Jared Bednar said. “Guys understand that we have this streak at home and they want to keep it going.”

After the Blackhawks outshot the Avalanche 10-8 in a scoreless first period, Colorado broke through on a power play in the second.

With defenseman Seth Jones in the penalty box for interference, the Avalanche got off several shots in quick succession that goalie Marc-Andre Fleury stopped before Kadri gathered in a short pass from Nathan MacKinnon and unleashed a slap shot from the top of the left circle. Fleury dropped to his knees to block it, but the puck trickled through at 11:24.

“It was big when we scored that one goal and kind of shut them down,” Francouz said. “In the third we were patient and it paid off.”

Rantanen added to the Avalanche lead at 6:41 of the third. Gabriel Landeskog sent a pass across the slot and, with a backhand flip, Rantanen lifted the puck over a fallen Fleury.

“I thought we had some chances early on, some good looks,” said Blackhawks star Patrick Kane. “Would have been nice to take a lead, play with a lead against a team like that. Their goalie played well but I still think we could have created a little bit more and had a little bit more of a push at the end.”

The Blackhawks have struggled to generate offense recently, scoring only four goals in their last three games.

“We’re not getting enough net presence, guys hanging around the net,” interim coach Derek King said. “We’re getting opportunities. It’s not a lack of chances. We need to get a little more traffic in front of the net.”

An empty-net goal by Colorado in the final moments was waved off for offside.

NOTES: Blackhawks G Kevin Lankinen was placed on injured reserve with a hand injury sustained in Saturday’s overtime loss against Minnesota. G Arvid Soderblom was recalled from Rockford of the AHL to fill the roster spot. … MacKinnon’s assist on Kadri’s goal was the 384th of his career, tying him with Anton Stastny for sixth on the franchise list. … The Avs improved to 3-0 against the Blackhawks this season. They will face each other one more time Friday in Chicago.

Avalanche: Host the Boston Bruins on Wednesday to close out a three-game homestand.

Willson Contreras led off with a double and became a rare leadoff hitter with a first-inning grand slam as the Chicago Cubs burst to an eight-run lead and beat the Pittsburgh Pirates 9-0
CHICAGO, IL・6 HOURS AGO
San Diego Union-Tribune

NHL LAS VEGAS (AP) — The Vegas Golden Knights fired coach Peter DeBoer on Monday in the aftermath of missing the playoffs for the first time in their five-year franchise history.
SAN DIEGO, CA・4 HOURS AGO