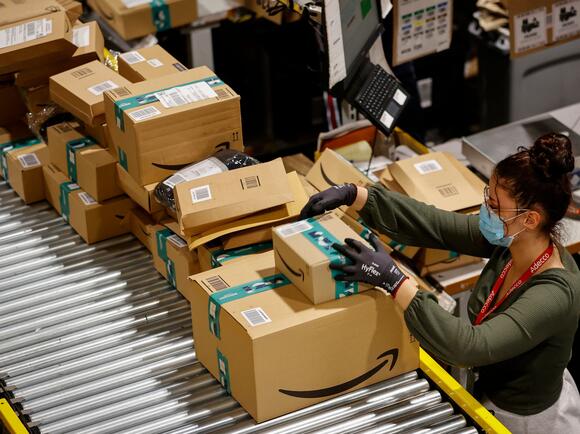 An Amazon warehouse worker in Bessemer, Alabama, says the company warned him against talking to workers about forming a union.

David Isaiah Thomas, one of the union organizers at the Amazon facility, filed two complaints with the National Labor Relations Board on Monday evening alleging that Amazon attempted to discipline him for talking about the union to his colleagues — in violation of the company's settlement agreement with the NLRB.

The complaints alleged that Amazon "unlawfully interfered with, restrained, coerced and/or discriminated against" Thomas.

"Mr. Thomas is an outspoken supporter of the Union. Shortly after questioning a labor relations manager during a captive audience meeting about the employer's union-busting positions, Mr. Thomas observed the employer's agent circling his work area for no other purpose than to watch him," one complaint said. "The employer also assigned Mr. Thomas to a work area where he is more easily observed by the employer's supervisors and/or agents."

NLRB spokesperson Kayla Blado confirmed to Insider that the board has received the charges and is in the process of docketing them.

Last year, a union drive at the warehouse in Bessemer failed as workers voted against forming a union . The NLRB later said Amazon had illegally interfered in the drive and ordered a new vote to be held February 4 . According to the NLRB, 6,143 employees are eligible to participate in the coming vote.

In a letter from Amazon to Thomas seen by Insider, the warehouse management at Amazon said Thomas was soliciting in working areas during work hours.

"While we understand your activity may have occurred during your break time, you were interfering with fellow associates during their working time, in their work areas," the letter said.

The management called it "a violation of Amazon's lawful solicitation policy" for workers to engage in any kind of solicitation on company premises during working time and distributing "literature or materials of any type or description (other than as necessary in the course of your job) in working areas at any time."

"Nothing in Amazon's solicitation policy restricts you, as an associate, from engaging in solicitation in non-work areas or while you and the associates you are soliciting are both on non-work time," the letter continued. "Non-work areas include, but may not be limited to, the parking lot and the site break rooms."

Amazon did not immediately respond to a request for comment from Insider.

hey its everyone right to assemble when there is unfairness with wages or other. off of the property not on work hrs. we are starting a union. wages will be met finally. 5-7$ increase. there was a period of 4 yrs w no raises for the company. this is a great thing for equality. we needed a voice for the workers. management didn't care.

of course they did. WALMART WILL SHUT A STORE DOWN IF YOU START TALKING UNIONS. I WAS TAUGHT IN MANAGEMENT TRAINING IF YOU HEAR ANYTHING ABOUT UNION FIND A WAY TO RELEASE THIS EMPLOYEE

If working conditions are good, there us no need for a union. BUT hearing some of the conditions at Amazon, a union may be beneficial.

Shareholders voted on 15 proposals that touched on socially conscious issues. None of the proposals passed.
BUSINESS・2 DAYS AGO
Business Insider

An entrepreneur built a platform for diverse workers to share honest reviews of their employers. It's registered over 5,000 reviewers from companies like Google and Deloitte in its first year.

After an 11-year career in real-estate finance, Ekow Sanni-Thomas founded Inside Voices to help bring transparency to D&I issues within companies.
BUSINESS・1 DAY AGO
Business Insider

When Amazon drones crashed, the company told the FAA to go fly a kite

Amazon is pushing to launch the first version of its drone program by mid-2024, and aims to expand test deliveries to 1,300 customers this year.
1 DAY AGO
Daily Mail

In another setback for the budding, yet controversial, telehealth mental health company Cerebral, it now will no longer have its prescriptions filled by CVS and Walmart - two of the largest retail pharmacies in America. It has been a turbulent month for the San Francisco, California-based, company so far, with...
ECONOMY・2 DAYS AGO

Musk reiterated his criticism of Bill Gates and advised Jeff Bezos to spend "less time in the hot tub" and partying "if he wants to get to orbit."
BUSINESS・1 DAY AGO
Business Insider

Employees have been using pandemic upheaval to demand higher wages and better conditions, but an economic downturn may alter the balance of power.
BUSINESS・2 DAYS AGO
Business Insider

Elon Musk will either pay far less for Twitter or use fake accounts as an excuse to walk away, experts say

Musk said last week that if 25% of users were bots, the deal for Twitter should cost 25% less. Experts agree the $44 billion offer looks expensive.
1 DAY AGO
Business Insider

JPMorgan employees describe growing 'paranoia' as the company tracks their office attendance, calls, calendars, and more — with one worker even installing a 'mouse jiggler' to evade 'Big Brother'

More than half a dozen employees at America's largest bank tell Insider why the firm's surveillance leaves them feeling fearful and untrusted.
BUSINESS・1 DAY AGO

Regulator asked world's richest man why he missed the 10-day deadline and about tweets made before he revealed his holding.
1 DAY AGO
Business Insider

The Great Resignation has spurred a new class of entrepreneurs. These 22 small business owners share how they turned side hustles into successful companies.

You could start a hair care business, a dog-walking service, or an urban farm. We put together a collection of guides to get started.
SMALL BUSINESS・1 DAY AGO
Business Insider

Kendal Nutricare makes the formula that Kate Middleton fed to Prince Louis.Parents have faced ongoing shortages of baby formula linked mainly to product recalls in the US. A UK manufacturer of the baby food used by the British royal family to feed Prince Louis will fly formula to the US to help combat ongoing shortages.
WORLD・2 DAYS AGO
Business Insider

One coffee roaster found that customers are willing to pay over $60 for carbon-free coffee beans shipped via sailboat from Colombia to the UK.
INDUSTRY・1 DAY AGO

I compared Sam's Club and Costco, and the winner comes down to lower prices and a better-designed food court

The two retailers are nearly identical in many ways, but Costco's food court has better options and is more convenient. Here's how they stack up.
MOUNT PROSPECT, IL・1 HOUR AGO
Business Insider

The UK's last school shooting was in 1996. It overhauled its gun-control laws after and there hasn't been another.

16 children and a teacher were killed in Dunblane, Scotland. Insider spoke to a campaigner who helped usher in strict handgun laws afterwards.
PUBLIC SAFETY・2 DAYS AGO
Business Insider

Hiring freezes and layoffs are happening everywhere. Here's what you should do next if your company hits pause on hires.

Hiring freezes can make employees feel powerless and nervous about potential layoffs. Here's what to do if your company says it's putting the brakes on hires.
ECONOMY・2 HOURS AGO
Business Insider

These foldable shipping containers could help solve the supply-chain crisis

Staxxon, a startup based out of New Jersey, thinks it may have a solution to historic congestion at some of the largest ports in the US.
INDUSTRY・47 MINUTES AGO
The Guardian

You’d have to be living under a rock not to know we are in the midst of one of the most devastating pandemics in history. Just how devastating became clear earlier this month when the World Health Organization released a report estimating the global excess death toll due to the pandemic as 15 million – nearly three times the official Covid death count. Other authorities think global excess deaths may be closer to 18 million. These are awfully big numbers, but they pale in comparison with the 1918-1919 Spanish influenza pandemic, which killed an estimated 40 million people – equivalent to about 150 million globally using current population figures.
BOOKS & LITERATURE・32 MINUTES AGO
Business Insider

This cash-back app aims to save shoppers hundreds of dollars a year on gas, groceries and eating out

Upside, a cash-back startup recently valued at $1.4 billion, said its users save an average of $35 per month on essential items.
CELL PHONES・3 HOURS AGO
The Motley Fool

Let Dividend King Stocks Lead You to the Promised Land