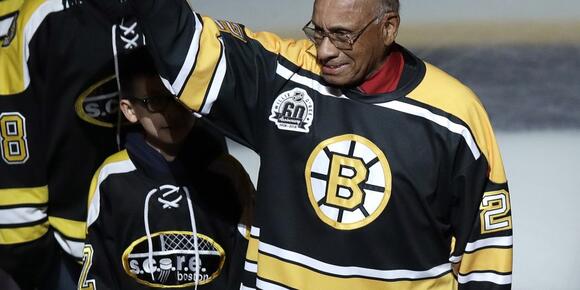 This past week, the Boston Bruins honored Willie O’Ree by retiring his No. 22 and lifting it high into the TD Garden rafters. But that is not enough.

O’Ree was the first Black player to play in a National Hockey League game. He made his debut with the Bruins against the rival Montreal Canadiens on Jan. 18, 1958.

But the road to getting on the ice wasn’t just difficult due to the color of his skin. O’Ree was hit in the face with a puck during the 1955-56 season while playing for the Kitchener Canucks and lost sight in his right eye.

Still, this didn’t stop O’Ree — who went on to play 45 games for the Bruins and had a 21-year professional hockey career.

“I will never forget how my teammates in the Bruins locker room accepted me as one of their own,” said O’Ree. “This was a time when some of the fans and opposing players were not ready to see a Black man in the NHL.”

O’Ree has continued to make an impact in the NHL and the world of hockey following his playing career, becoming the NHL’s diversity ambassador in 1998. In 2018, O’Ree was inducted into the Pro Hockey Hall of Fame.

It’s a shame that it took so long for O’Ree to get honored. It’s something that should have happened a long time ago.

It took Major League Baseball just six years to name Jackie Robinson — the first Black player to play in MLB — to the Baseball Hall of Fame. Ten years later in 1972, the Los Angeles Dodgers retired his number. In 1997, on the 50th anniversary of Robinson breaking the color barrier, No. 42 was retired throughout all of baseball.

This is especially the case when you look at the abuse that Black hockey players still have to go through. On Friday, the American Hockey League announced that Krystof Hrabik was suspended for 30 games after directing a racial gesture at Boko Imama on Jan. 12. According to Greg Wyshynski of ESPN, Hrabik imitated a monkey’s movements.

The NHL and hockey world as a whole still has a lot of work to do when it comes to protecting and encouraging diversity in the sport. Retiring O’Ree’s number league wide might seem simply symbolic to some, but it will continue to strengthen the NHL’s message that “Hockey is for Everyone,” and honor O’Ree in a proper manner.