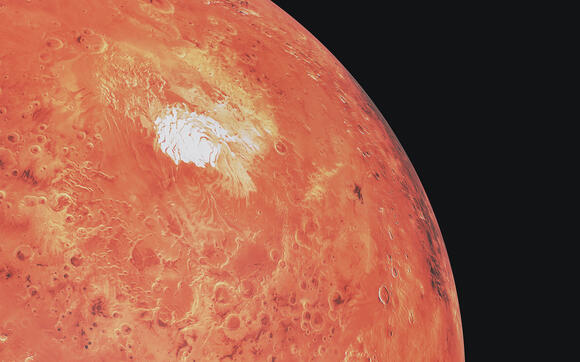 Way back in 2018, scientists discovered the Martian south pole. It was an incredible find. At the time, it garnered a lot of hope that the surface of the planet could still house groundwater. Unfortunately, the new study may have dashed those hopes. A new study in the journal Geophysical Research Letters reports that the reflections they believed to be water buried under Martian polar ice caps are most likely just volcanic rock.

Our beliefs about the Martian south pole might be wrong

“For water to be sustained this close to the surface, you need both a very salty environment and a strong, locally generated heat source,” Cyril Grima, the study’s lead author said (via SciTech Daily ).

Based on that criteria, Grim says the Martian south pole doesn’t match up. Pair that with the new knowledge learned from the radar map with the ice sheet, and it looks like it could have all been a mirage. While this discovery may have disproven one of our greatest discoveries about Mars, all hope is not lost. In fact, there is still plenty of water ice on the planet, including in the Martian polar caps. That means we may still find evidence of groundwater on the surface.

Looking for water on Mars

Despite the sad news, there is still a lot that we don’t understand about Mars. But, this also isn’t the only theory about the Martian south pole’s discovery, either.

According to SciTech Daily , a Mars geophysicist with York University named Isaac Smith has proposed another possibility. Smith believes that the bright radar signatures that we witnessed at the Martian south pole could be a type of clay that is made when water erodes rock. He believes we could use those signatures to learn more about Mars’ history with water.

Smith also said that Grima’s finding has some beauty to it. Ultimately, it could point us to other places where water may have been before. Even if the discovery of groundwater at the Martian south pole does prove to be a mirage, we can still hold onto hope. Of course, it’s impossible to know anything for sure. All we can do is theorize until we’ve been able to send explorers to Mars. Unfortunately, that’s still a long way from happening.

The post One of our most incredible discoveries on Mars might just be a mirage appeared first on BGR .

NASA: Mysterious new Hubble data on the universe is ‘something weird’

The nearly 30-year-old Hubble Space telescope continues to deliver outstanding data to astronomers. Now, NASA says that data Hubble has been gathering over the years could challenge what we thought we knew about our universe’s expansion rate. Hubble keeps throwing wrenches in what we know about the universe’s expansion...
ASTRONOMY・3 DAYS AGO
BGR.com

Earth’s various auroras are some of the most spectacular sights you can find on the planet. But, Earth isn’t the only celestial body that experiences these phenomena. They’ve also been seen on Mercury, some moons around Jupiter, and even on a comet. But, one unlikely planet that you might not expect to see these on is Mars.
ASTRONOMY・2 DAYS AGO
BGR.com

An ancient tooth found in a cave has been linked to the Denisovans, a sister species of modern humans. The tooth was first found during an archaeological survey in a remote area of Laos. Now, scientists have shown that it originated from the same ancient human species that was first discovered in Denisova Cave in the mountains of Siberia.
SCIENCE・3 DAYS AGO
BGR.com

Time is running out for one of NASA’s spacecraft. The InSight Mars lander is dying, and NASA doesn’t have any big plans to keep it alive. To be fair, the lander has been on the outs for a number of months now. That’s because the dust that Mars’ various storms kick up has been gathering on the lander’s solar panels.
AEROSPACE & DEFENSE・4 DAYS AGO

New videos captured by the ESA and NASA’s Solar Orbiter showcase the Sun in a brand-new light. The videos were captured during the probe’s first close perihelion passages. This is, of course, just the first time that the space probe will zoom in on the Sun’s details. But that doesn’t make things any less exciting.
ASTRONOMY・3 DAYS AGO
BGR.com

Urgent ham recall: If you bought this ham at Walmart, throw it out now

Consumers who purchased sliced Black Forest Ham from Walmart stores should be aware of an urgent new health alert. The US Department of Agriculture (USDA) warns customers that the ready-to-eat (RTE) ham may not be fully cooked due to underprocessing. There’s no full recall in place for the Black Forest Ham, as it’s no longer available for purchase at Walmart stores. Otherwise, the USDA would have demanded a recall following the discovery.
INDIANA STATE・3 DAYS AGO
BGR.com

At the beginning of this year, it certainly looked like stimulus checks were going to be a thing of the past. A US Senator (Joe Manchin) had just signaled his opposition to continuing President Biden’s child tax credit checks, and that was that. Since then, however, states have taken up the mantle themselves, with one after another sending out localized stimulus checks and tax rebates.
INCOME TAX・3 DAYS AGO
BGR.com

FDA recall: If you have any of this jam from the past 2 years, throw it out

People with soy allergies or who are sensitive to the ingredient should not eat two types of Mrs Miller’s Homemade Jams, as they’re part of the brand new recall. The Smokey BBQ Bacon Jam and Spicy Chili Bacon Jam contain soy, but the labels do not list the ingredient.
FOOD SAFETY・5 DAYS AGO

The stimulus checks keep flowing — sort of. In the absence of any more such handouts from the federal government, states and cities have taken a piecemeal, ad hoc approach to try and keep all this going on a local level. It’s why, for example, Californians might be getting money to offset high gas prices soon. And why Biden himself wants to pivot from stimulus checks to a different kind of stimulus (student loan debt relief). Meanwhile, Hawaii has a stimulus-style program of its own, to help people with soaring rent payments.
HAWAII STATE・4 DAYS AGO
BGR.com

We’ve got more bad news for peanut butter fans. After the Skippy recall from early April, you should be aware of a massive JIF peanut butter recall. The company has recalled 49 different types of JIF peanut butter after discovering traces of Salmonella during testing. That’s a bacteria that health agencies routinely test for, as it can cause severe illnesses that can be fatal in some groups of people.
FOOD SAFETY・7 HOURS AGO
BGR.com

Urgent fruit recall: These berries might be carrying norovirus

Food products that test positive for bacteria and viruses are usually recalled to reduce the risk of infection. And most food-related recalls follow positive testing for a type of bacteria, whether it’s E. coli, Salmonella, or Listeria. But viruses can also be found in food. And now, a virus is responsible for a brand new fruit recall. It’s the norovirus, which was found on samples coming from a lot of Below Zero raspberries, thus triggering a recall.
FOOD SAFETY・1 DAY AGO
BGR.com

A bizarre mystery surrounding NASA Voyager 1 probe is being investigated

NASA is investigating an issue with Voyager 1’s telemetry data. The space agency shared news of the investigation this week. NASA says that Voyager 1 continues to return science data and is otherwise operating as expected. However, there is a system data issue that has cast a bit of a mystery over the mission.
AEROSPACE & DEFENSE・4 DAYS AGO
BGR.com

If you purchase an independently reviewed product or service through a link on our website, we may receive an affiliate commission. When you hunt for deals on Amazon, you’re probably often looking for popular products like Apple AirPods and Instant Pots. Yes, it’s great to save some money on best-sellers like those, but you’re not going to wow anyone with them. There are so many cool gadgets on Amazon. And some of the best Amazon finds cost under $40!
ELECTRONICS・4 DAYS AGO
BGR.com

The International Space Station’s spacesuits might finally need to be retired. NASA has paused ISS spacewalks following a water leak in one of the astronauts’ helmets. This isn’t the first time that the aging spacesuits have sprung a leak, either. Back in 2013, ESA astronaut Luca Parmitano had to cut a spacewalk short after his helmet filled with 1.5 liters of water.
AEROSPACE & DEFENSE・2 DAYS AGO
BGR.com

Reports said a few months ago that Disney is studying an ad tier subscription for its Disney Plus streaming service, without disclosing any details about the subscription option. But that was an indication that, unlike Netflix, Disney is looking to reduce prices and ensure more people keep paying a subscription, even if that means incorporating ads into the experience.
TV & VIDEOS・5 DAYS AGO
BGR.com

See dazzling photos of our last total lunar eclipse until 2025

We just experienced one of the best total lunar eclipses of the last few days. In fact, 2022’s total lunar eclipse is the last Americans will see this widely, at least until 2025. If you missed the eclipse over the weekend, then worry not, plenty of people were able to see it. And plenty of them shared photos of the event on social media. So, let’s look at a few.
ASTRONOMY・5 DAYS AGO
BGR.com

Developing new treatments for ailments can be a tedious and frustrating process for scientists. Oftentimes, newly developed drugs just don’t work the way they were intended, falling short of expectations and leading to a dead end. But other times, a drug developed for one purpose turns out to be even more effective at treating something completely different. In the past, this has happened with drugs such as prednisone, which was originally meant for inflammatory diseases but actually helps treat Parkinson’s disease symptoms. These are called repurposable drugs. another instance of this took place in 2017 with the realization that medicine for type 2 diabetes could have benefits for those with Alzheimer’s disease.
MEDICAL SCIENCE・4 DAYS AGO
BGR.com

NASA is preparing for Boeing’s Starliner launch with the company’s Orbital Flight Test-2. The mission will see the Starliner spacecraft lifted into orbit, where it will dock with the International Space Station. The launch is scheduled to kick off at around 6:54 p.m. EDT on Thursday, May 19,...
AEROSPACE & DEFENSE・5 DAYS AGO