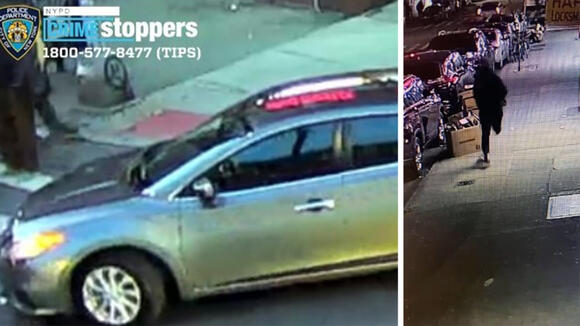 Police are ramping up their efforts to catch a suspect connected to a shooting that left a baby girl shot in the face in the Bronx last week. On Monday, authorities increased their reward to $10,000 for information leading to the arrest of a suspect caught on newly released surveillance video. The shooting happened Wednesday evening, when a gunman fired two shots at another man during a chase from Grand Concourse onto Valentine Avenue. RELATED | Bronx DA Darcel Clark to man who shot baby girl: 'You're not going to get away with it'

One of those bullets struck 11-month-old Catherine, who was sitting in a car with her mother as her father shopped in a nearby deli. The new video captures the suspect fleeing by foot on East 198th Street towards Valentine Avenue moments after firing the shots.

Police are ramping up their efforts to catch a suspect connected to a shooting that left a baby girl shot in the face in the Bronx last week.

Police also released photos of the grey Nissan four-door sedan that they say the suspect fled in. Baby Catherine had brain surgery on Friday , the same day she turned 1 years old.

A baby girl shot in the face by a stray bullet in the Bronx turned 1 Friday, and loved ones are being joined by anti-violence activists at a vigil. N.J Burkett has the latest.

Authorities say 25-year-old Andrew Abdullah, who has about 20 prior arrests, was the man seen pacing around the subway car before shooting 48-year-old Daniel Enriquez in the chest, killing him.
NEW YORK CITY, NY・3 HOURS AGO
ABCNY

The 90-year-old woman was walking on West 64th Street when a man approached her and took her purse from her walker.
UPPER WEST SIDE, NY・11 HOURS AGO
ABCNY

Charges were filed against nearly three dozen alleged gang members who police say rapped about their crimes and beat a pigeon to death with a cane.
BRONX, NY・9 HOURS AGO
ABCNY

Omar Bojang, the 18-year-old who was allegedly driving the scooter from which a gunman killed 11-year-old Kyahara Tay, surrendered Monday.
BRONX, NY・1 DAY AGO

A 19-year-old man is in the hospital after being attacked by another man with a hatchet.
MANHATTAN, NY・15 HOURS AGO
ABCNY

Police are investigating two fatal hit-and-run crashes on Long Island that happened not far from each other. Both happened in Suffolk County late Monday night.
SUFFOLK COUNTY, NY・9 HOURS AGO

Three females were killed in a crash near a catering hall on Long Island, as they left a Sweet 16 birthday party.
1 DAY AGO
ABCNY

Police say the alleged gunman was nabbed at a friend's house in the Bronx. He is charged with murder, manslaughter and two counts of criminal possession of a weapon.
BRONX, NY・3 DAYS AGO
ABCNY

The officers' vehicle was struck by a black Mercedes at the intersection of Dyckman Street and Nagle Avenue in Inwood just after 5:30 a.m. Friday.
MANHATTAN, NY・4 DAYS AGO

Three years later, her relatives said in a statement, they feel "the immeasurable loss" every day and await the next steps in the prosecution of two individuals who are due back in court next month.
14 HOURS AGO
ABCNY

Three people were killed and several others were injured in a crash near a catering hall on Long Island, according to police.
NEW HYDE PARK, NY・2 DAYS AGO

Video shows the man throwing traffic cones at the vendors cart and yelling at him.
NEW YORK CITY, NY・3 DAYS AGO
ABCNY

An on-duty EMT was released from the hospital after being shot in his shoulder while treating an allegedly drunk and disorderly patient inside his ambulance on Staten Island Wednesday night.
STATEN ISLAND, NY・5 DAYS AGO
ABCNY