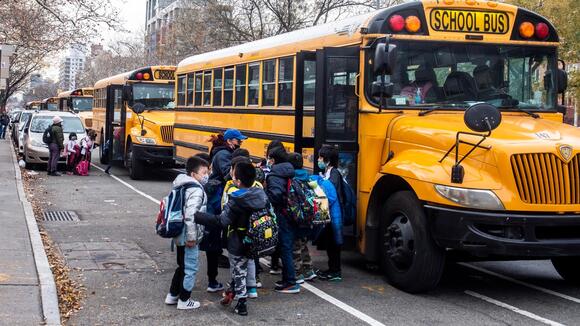 A New York judge ruled Monday that the state's mask mandate can't be enforced, after it was reinstituted by Gov. Kathy Hochul over concerns about a winter surge of coronavirus cases. However, the New York State Department of Education issued a statement that schools must continue to follow the mask rule until the case is resolved. It all started when State Supreme Court Judge Thomas Rademaker said in his decision that the state Department of Health didn't have the legal authority to implement the mandate, and that it was up to the state Legislature to do so if needed. The mandate "is a law that was promulgated and enacted unlawfully by an executive branch state agency, and therefore void and unenforceable," the judge said. That prompted Nassau County Executive Bruce Blakeman to declare that starting Tuesday, kids could go to school without masks on. However, the Department of Education released the following statement: "The State Education Department understands that Nassau County Supreme Court has ruled that the Department of Health exceeded its authority in enacting the mask regulation, 10 NYCRR 2.60, in Demetriou et al. v. New York State Dep't of Health et al. This regulation is the subject of conflicting decisions, insofar as Albany County Supreme Court recently upheld the regulation in Massapequa UFSD et al. v. Hochul, et al. It is SED's understanding that the Department of Health will appeal the Nassau County Supreme Court decision, which will result in an automatic stay that will unambiguously restore the mask rule until such time as an appellate court issues a further ruling. Therefore, schools must continue to follow the mask rule." At least 19 school districts on Long Island have announced they would make masks optional on Tuesday including the following: Plainedge, Massapequa, North Merrick, Smithtown, Levittown, East Meadow, Sachem, West Islip, Farmingdale, Franklin Square, Rockville Centre, Sewanhaka, Bellmore-Merrick Central High School Districts, Copiague, Carle Place, Harborfields, Commack, Connetquot and Lindenhurst. Masks remain mandatory in Jericho, Baldwin, Syosset and all Catholic schools. Gov. Hochul released the following statement on Monday night: "My responsibility as Governor is to protect New Yorkers throughout this public health crisis, and these measures help prevent the spread of COVID-19 and save lives. We strongly disagree with this ruling, and we are pursuing every option to reverse this immediately." The state had initially instituted a mask mandate in April 2020 that ended in June 2021 for vaccinated individuals; Hochul announced in mid-December that it would go back into effect for at least a month. Earlier this month, the state health department said the mandate would be in place until Feb 1. The ruling comes as the omicron wave that gripped New York state appears to be fading. The state averaged around 23,400 new cases of the virus per day in the 7 day period that ended Sunday, down from 74,600 per day during the wave's peak in early January. Hospitalizations are dropping, too, declining 17% statewide in the past 7 days. (The Associated Press contributed to this report.) ALSO READ | MTA officials address alarming rise in crime, promise more uniformed officers on platforms

This should be an option. Not a mandate by an acting Governor who has stated she has to protected NYers during this public health crisis. This decision should be discussed by parents, school officials and they should have feed back from the students. I know what I am about to write has no relevance to this article. If she is so concerned about the welfare of NYers,. get rid of the no bail law. Alot of people will feel safer.

mask are proven to be ineffective .....and until case is resolved ???? it was resolved it is unconstitutional.

Good it's disgusting for kids to wear clothes on their face constantly dropping and touching it they are petri dishes of germs they need fresh air for their little lungs.

A federal judge could determine the future of Rikers Island during a hearing Tuesday afternoon on the city's plans to reform the troubled jail amid a possible federal takeover.
NEW YORK CITY, NY・17 HOURS AGO
ABCNY

The New York State Department of Education is canceling its U.S. History and Government Regents exam scheduled for June 1 in the aftermath of the Buffalo mass shooting.
BUFFALO, NY・12 HOURS AGO
ABCNY

New York City is under a state of emergency as the formula shortage in the nation has parents struggling to find ways to feed their babies.
NEW YORK CITY, NY・1 DAY AGO

CONNECT will be launched at nine clinic sites in high-need areas throughout The Bronx, Manhattan, and Brooklyn. They are currently accepting referrals.
NEW YORK CITY, NY・21 HOURS AGO
ABCNY

The City is working to build a massive 2,200-acre park on the land in phases, starting with projects adjacent to surrounding communities.
NEW YORK CITY, NY・13 HOURS AGO
ABCNY

New Jersey principal retiring after 50 years in district, gets key to city

Paterson Mayor Andre Sayegh on Tuesday presented a key to the city to longtime school principal Felisa Van Liew, who is retiring after 52 years in the district.
PATERSON, NJ・9 HOURS AGO
CNN

MIDTOWN MANHATTAN (WABC) -- Once, not so long ago, pay phones were a common sight all around New York City, and they had been for over a century. But then came cellular phones in the late 1990s, and the number of public phones began to decline. And later, smart phones like the iPhone arrived. And pay phones kept disappearing.
NEW YORK CITY, NY・1 DAY AGO

Nurses and technicians at St. Michael's Medical Center in Newark went on strike at 7 a.m. Monday, citing what they call hospital management's blatant disregard for the safety of employees and patients.
1 DAY AGO
ABCNY

Mayor Eric Adams has said it makes no sense for the cameras to have limited hours when a majority of crashes happen late at night and early in the morning.
NEW YORK CITY, NY・4 DAYS AGO
ABCNY

New Jersey may be known for its beaches and boardwalks, but the Garden State has much more to offer in terms of water activities, and officials on Tuesday launched their inaugural Kicking Off Summer Lakes Tour.
LIFESTYLE・9 HOURS AGO

COVID isn't over. One example is the fact that some 20 New York City judges are now COVID positive after they attended a retreat in Montauk last weekend, according to published reports.
NEW YORK CITY, NY・5 DAYS AGO
ABCNY

Israeli flags filled Fifth Avenue on the Upper East Side on Sunday for the 'Celebrate Israel' Parade.
MANHATTAN, NY・2 DAYS AGO
ABCNY

How much are your taxes? Check out our Long Island school tax database

Long Islanders went to the polls this week to vote on their school district budgets for the 2022-2023 school year.
PERSONAL FINANCE・4 DAYS AGO

A search was launched after 15-year-old Naz'ier Randolph, of Paterson, disappeared on Saturday afternoon while swimming with friends.
1 DAY AGO
ABCNY

Gas in New York is quickly approaching an average of $5 per gallon, increasing again Thursday to $4.91.
NEW YORK CITY, NY・4 DAYS AGO
ABCNY

Authorities say 25-year-old Andrew Abdullah, who has about 20 prior arrests, was the man seen pacing around the subway car before shooting 48-year-old Daniel Enriquez in the chest, killing him.
NEW YORK CITY, NY・4 HOURS AGO