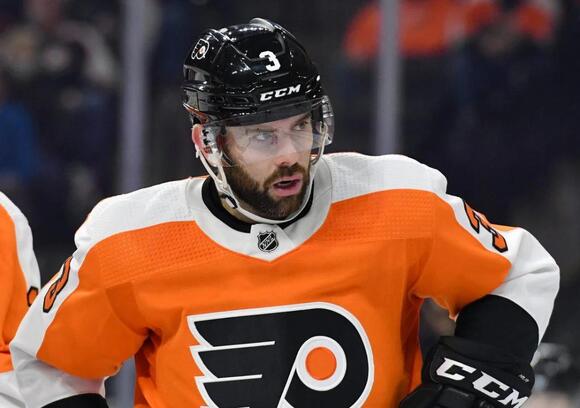 The NHL record for most consecutive games played has stood since 1987. But that record has now been tied, as Philadelphia Flyers defenseman Keith Yandle skated in his 964th consecutive game Monday night when the Flyers hosted the Dallas Stars, tying the record originally set by Doug Jarvis.

A center for the Montreal Canadiens, Washington Capitals and Hartford Whalers, Jarvis set the original mark over 12 seasons from 1975-87.

Yandle’s ironman streak began on March 26, 2009. He can make the record all his own if he takes a shift against the New York Islanders in New York Tuesday night.

“It’s how hockey players are built,” Yandle said Sunday about the streak. “You play through as much pain as you can. There have obviously been some times when I have not felt great, when it was tough sledding. But you try to battle through it and help out your team.”

Three other current players had active streaks that rank in the top 11 in NHL history going into Monday’s games. The Arizona Coyotes’ Phil Kessel is closest behind Yandle at 940 consecutive games, though the San Jose Sharks’ Patrick Marleau (910) and Brent Burns (639) also maintained streaks coming into the night.

Yandle is in his first season with the Flyers, playing in 42 straight contests and recording 13 points on 13 assists.

For his career, Yandle has participated in 1,074 games overall with 102 goals and 511 assists (613 points) in stints with Phoenix/Arizona, the New York Rangers, Florida Panthers and Flyers.

The NHL season officially started back on October 12. In this article, we track all the NHL games today as
10 HOURS AGO
Sportsnaut

The Tampa Bay Lightning can return to the Eastern Conference Finals for a third straight season with a victory against
TAMPA, FL・16 HOURS AGO
Sportsnaut

On Sunday, the New York Rangers managed to find more open ice for their offense and then survived a barrage
RALEIGH, NC・3 HOURS AGO
Sportsnaut

Nothing gets the people going quite like the Stanley Cup Playoffs. Find out how to live stream every NHL Playoff game here.
NHL・4 HOURS AGO
Sportsnaut

Bookmark. Save. Favorite. Do your thing. This is the one-stop-shop for everything NBA schedule-related heading into the 2021-22 season: Related:
BOSTON, MA・10 HOURS AGO
Sportsnaut

Months before the offseason arrived, everyone assumed Zach LaVine would re-sign with the Chicago Bulls. On the verge of becoming
CHICAGO, IL・2 DAYS AGO

The NHL asked police in St. Louis to ramp up security at the Avalanche’s team hotel and the Blues’ arena
SAINT LOUIS, MO・4 HOURS AGO
Sportsnaut

For the third time this postseason, the Dallas Mavericks’ organization faces a fine for how it has handled itself on
DALLAS, TX・1 DAY AGO

Chad Kuhl once was part of the future of the Pittsburgh Pirates’ rotation. On Monday, the right-hander returns to face
PITTSBURGH, PA・15 HOURS AGO
Sportsnaut

The Minnesota Timberwolves finalized a five-year deal with Denver Nuggets president of basketball operations Tim Connelly to have him lead
MINNEAPOLIS, MN・1 HOUR AGO
Sportsnaut

Cardinals to be featured on in-season ‘Hard Knocks’

The Arizona Cardinals will be featured on the second installment of HBO’s “Hard Knocks In Season.” It’s the first appearance
GLENDALE, AZ・3 HOURS AGO
Sportsnaut

The Dallas Wings visit the Connecticut Sun on Tuesday night in a showdown of two of the best teams in
DALLAS, TX・3 HOURS AGO
Sportsnaut

The Miami Heat were off to a hot start Saturday for their Game 3 Eastern Conference Finals matchup with the
BOSTON, MA・7 HOURS AGO
Sportsnaut

Miami Heat star Jimmy Butler is listed as questionable for Monday’s Game 4 of the Eastern Conference finals after missing
MIAMI, FL・21 HOURS AGO