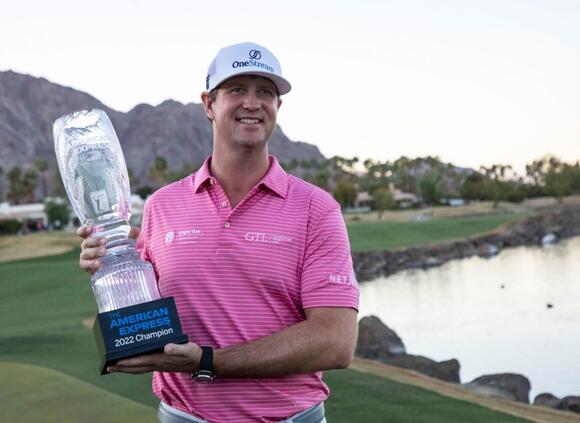 Hudson Swafford vaulted 105 spots to a career-best 61st in the Official World Golf ranking following his victory at The American Express.

Swafford closed with a 64 on Sunday to pull away for a two-shot victory. It was his third career PGA Tour title, but his first in the mainland United States since claiming his maiden tour win at the same venue five years ago.

Other than his past success at the three-course event, there was little to suggest Swafford was poised for a victory. He missed more cuts (36) than he made (27) over the past three years and hadn’t finished better than a tie for 32nd in his first eight starts of the 2021-22 season.

But Swafford put on a show on the back nine Sunday, posting five birdies and an eagle to more than offset a pair of bogeys. For the final round as a whole, his card had only four pars as Swafford posted nine birdies, three bogies and the eagle.

Also reaching a new career high was Viktor Hovland. The Norwegian moved past Americans Justin Thomas and Xander Schauffele for No. 5 on the strength of his tie for fourth in Abu Dhabi.

Belgium’s Thomas Pieters, who won the event, climbed 41 spots to No. 31 – eight shy of his own career-best.

Patrick Cantlay was unable to cash in on his 36-hole lead at The American Express, but his T9 was good enough to inch past Dustin Johnson for No. 3 in the world. The reigning FedEx cup champion is behind only Spain’s John Rahm, who tied for 14th, and Collin Morikawa, who struggled to a T62 in Abu Dhabi.

Tom Hoge rose 51 spots to No. 64 after rallying for a runner-up finish at The American Express.

Lee Hodges and France’s Paul Barjon shared the 54-hole lead and went on to finished T3 and 10th, respectively. Hodges rose from No. 312 in the world to 200th while Barjon climbed from 313th to 257th.

Chile’s Mito Pereira simply needed to par out on 18 Sunday afternoon to win the 2022 PGA Championship. For the
TULSA, OK・2 DAYS AGO
Sportsnaut

The 2022 PGA Championship from Southern Hills Country Club in Tulsa, Oklahoma, was held over the past four days. One
TULSA, OK・2 DAYS AGO

No longer a “one-hit wonder,” Justin Thomas is feeling wonderful after winning his second PGA Championship. “It was obviously a
FORT WORTH, TX・1 HOUR AGO
Sportsnaut

Justin Thomas birdied the first two holes of a three-hole aggregate playoff to win the PGA Championship for the second
TULSA, OK・2 DAYS AGO
Sportsnaut