‘No signs of panic’ by Corporate America’s debt investors, even with stock market turbulence 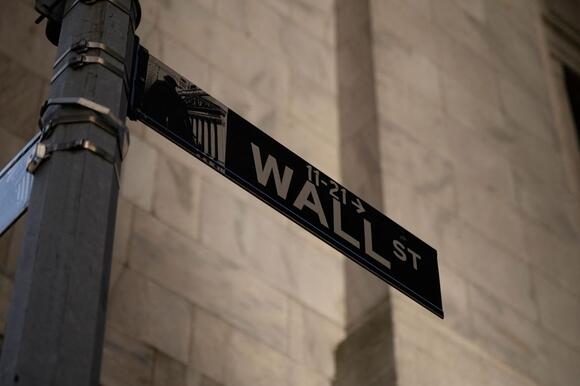 Debt investors in top American companies aren’t freaking out, even as turbulence in stocks threatens to land the S&P 500 in correction territory.

Investment-grade corporate bond spreads came under continued pressure to start the week, with many investors expecting the Federal Reserve on Wednesday to provide a clearer road map for increasing rates and reducing its nearly $8.8 trillion balance sheet to fight inflation.

But Matt Brill, Invesco’s head of North America investment grade, pointed out that investment-grade corporate bonds generally have been outperforming stocks, despite the recent ruction in markets, and are “seeing no signs of panic.”

The closely tracked iShares iBoxx $ Investment Grade Corporate Bond ETF (LQD) was down 3.1% on the year through Tuesday, versus the S&P 500 index’s more than (SPX) 9% decline in January and the Nasdaq Composite Index’s (COMP) 14% drop into correction territory to start 2022.

Companies also borrowed a record amount in the U.S. corporate bond market during the pandemic at ultralow rates, resulting in bolstered balance sheets and a cash pile still roughly $340 billion above pre-2020 levels (see chart), as of the third quarter, according to BofA Global. 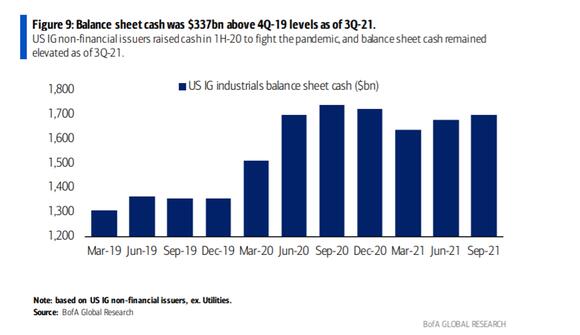 With the recent rate selloff and credit-spread widening , Brill said “yields are still on the historically low side,” making it “tempting for corporations to borrow,” particularly in the early part of 2022 as issuers fear higher rates.

That said, companies could face a less supportive Fed when it comes to steadying jittery stock and bond markets, as the central bank’s focus turns to tamping down inflation running at a 7% annual rate.

“I think the real economy is likely to do better than financial assets this year,” said Mark Heppenstall, president and chief investment officer at Penn Mutual Asset Management, in a phone interview.

“The Fed clearly wants to keep credit available and doesn’t want financial instability. But I do think they are going to have a lot more tolerance than recently for weakness across credit markets, given that inflation now is at a level where the Fed has to address it.”

The 10-year Treasury rate (BX:TMUBMUSD10Y) a benchmark for pricing corporate bonds and a host of other debt instruments underpinning the economy, was at 1.76% on Tuesday.

That is up nearly 25 basis points on the year, with expectations running high for Fed Chairman Jerome Powell this week to provide more guidance on how quickly the central bank expects to reduce its balance sheet and lift rates from the current 0% to 0.25% range.

Read : How Jerome Powell may try to calm the market’s frazzled nerves

“What I would have liked to have seen is rate hikes three months ago, and an end to QE three months ago,” said David Norris, head of U.S. credit at TwentyFour Asset Management, speaking of the Fed’s quantitative easing, or large-scale bond buying, program over the past two years.

“I am hoping that they do end QE,” Norris said, by phone. “I hope they would actually implement a 25-basis-point rate hike, because after this January meeting there’s another six weeks before the next meeting.”

“There’s a real fear now that inflation is causing demand destruction, which wouldn’t be good.”

Despite the extensive losses seen for stock markets so far this year, it’s not over until it’s over — and investors should keep selling into any big rebounds higher. That’s the advice from a team of strategists at Bank of America, led by Michael Hartnett, in their Friday “Flow Show” note. In focus for the bank is increasing debate about whether the market has capitulated, which refers to investors basically giving up on trying to recapture lost gains.
STOCKS・2 DAYS AGO
MarketWatch

Biotech is in ‘a Category 5 storm, the same as energy in 2020’ — why contrarians say the sector is a buy

If you want to know how much investors hate the biotech sector right now, consider this simple statistic: More than 25% of small biotech companies have stock-market capitalizations that are smaller than how much they have in cash. “The market is saying a quarter of these companies are literally worth...
MEDICAL & BIOTECH・2 DAYS AGO
MarketWatch

Shares of Deere & Co. DE, -14.07% fell 1.8% toward a three-month low in premarket trading Friday, even after the agriculture, construction and forestry equipment maker reported fiscal second-quarter profit and revenue that rose above expectations, as "strong demand" helped offset supply-chain pressures. Net income increased to $2.10 billion, or $6.81 a share, from $1.79 billion, or $5.68 a share, in the year-ago period. The FactSet consensus for earnings per share was $6.69. Sales grew 10.9% to $13.37 billion, above the FactSet consensus of $13.23 billion. Cost of sales rose 12.5% to $8.92 billion, as gross margin contracted to 33.3% from 34.3%. Production & Precision Agriculture sales rose 13% to $5.1 billion, Small Agriculture & Turf sales increased 5% to $3.6 billion and Construction & Forestry sales rose 9% to $3.45 billion. The company affirmed the sales growth outlook for fiscal 2022. Deere's stock has gained 6.3% year to date through Thursday while the S&P 500.
STOCKS・2 DAYS AGO
dailyhodl.com

Silk Road founder Ross Ulbricht is forfeiting billions of dollars worth of Bitcoin (BTC) and other crypto assets to the US government. According to a new court filing, Ulbricht will relinquish any claim to over 69,000 BTC and undisclosed amounts of Bitcoin Gold (BTG), Bitcoin SV (BSV) and Bitcoin Cash (BCH) worth a combined $3 billion as part of a settlement.
PUBLIC SAFETY・27 DAYS AGO

MILLIONS of Americans are set to receive Social Security checks worth up to $1,657 tomorrow. The cash boost will come just 48 hours before Supplemental Security Income payments, worth up to $841, are set to land in around eight million bank accounts on April 29. Seniors with birthdays on the...
BUSINESS・26 DAYS AGO
The Independent

A top US official in the Pacific has warned that America would have to “respond” if the Solomon Islands allows China to establish a military base there.Following a “constructive and candid” 90-minute meeting with prime minister Manasseh Sogavare, ambassador Daniel Kritenbrink said that the security deals between China and the Solomon Islands present “potential regional security implications” for the US and other allies.“We wanted to outline for our friends in the Solomons what our concerns are,” Mr Kritenbrink, US assistant secretary for East Asian and Pacific Affairs, told reporters.“We have respect for the Solomon Islands’ sovereignty. But we also...
FOREIGN POLICY・26 DAYS AGO
Business Insider

A member of a superyacht crew also told The Times of London that one owner had his bar stools made from whale foreskin.
BOATS & WATERCRAFTS・28 DAYS AGO

This is an important segment of the population with purchasing power that is practically ignored by advertising campaigns.
ECONOMY・26 DAYS AGO
MarketWatch

TerraUSD USTUSD, -22.76% and LUNA LUNA, -4.26% are being falsely accused for what’s come to be known as the “crypto crash.” A good counterargument can be made that the real culprit is bitcoin’s. BTCUSD,. +0.91%. overvaluation. The notion that bitcoin’s fair value can even be calculated...
MARKETS・1 DAY AGO
MarketWatch

COLOMBO, Sri Lanka (AP) — Sri Lankan authorities on Friday closed schools and asked public officials not to come to work in a desperate move to prepare for an acute fuel shortage that is expected to last days amid the nation’s worst economic crisis in decades. The Public...
ASIA・2 DAYS AGO
MarketWatch

Beyond helping clients manage their finances, some financial advisers aim higher. They educate consumers — people they will never meet — about personal finance. These advisers have created free resources that empower individual investors to make wise financial decisions. Such resources also can enhance advisers’ marketing and brand identity — enabling them to reach a far wider audience than their client base. Some of these online tools have legions of fans.
PERSONAL FINANCE・1 DAY AGO

Russia halted gas exports to neighboring Finland on Saturday, a highly symbolic move that came just days after the Nordic country announced it wanted to join NATO and marked a likely end to Finland’s nearly 50 years of importing natural gas from Russia. The measure taken by the Russian...
ENERGY INDUSTRY・1 DAY AGO
MarketWatch

78,000 pounds of infant formula arrives in U.S. from Europe; more to come

INDIANAPOLIS — A military plane carrying enough specialty infant formula for more than half a million baby bottles arrived Sunday in Indianapolis, the first of several flights expected from Europe aimed at relieving a shortage that has sent parents scrambling to find enough to feed their children. President Joe...
INDIANAPOLIS, IN・4 HOURS AGO
MarketWatch

It’s an image of a man in thoughtful repose, looking down at the camera as he stands in front of a brick wall. In short, a selfie that seems designed not to call too much attention to itself. And yet, it’s the picture that some say may have played...
MINNEAPOLIS, MN・1 DAY AGO