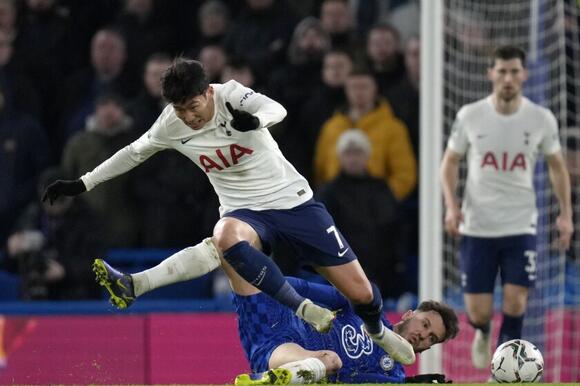 Asia could confirm its first participants in the World Cup — along with host Qatar — on Thursday with Iran and South Korea both within reach of securing their places.

Iran is on top of Group A with 16 points from six games with South Korea two points behind in the second of the two automatic qualification spots, eight ahead of United Arab Emirates (UAE) in third.

Only the top two are guaranteed a place at the World Cup that kicks off in November.

If the UAE fails to defeat Syria in Dubai then South Korea will secure a 10th successive appearance if it defeats Lebanon in Sidon. Lebanon has collected just five points from six games.

South Korea, a 2002 semifinalist, has been warming up for the game — and next Tuesday’s match with Syria — with a training camp in Turkey. Preparations have gone well with a 5-1 win over Iceland on Jan. 15 and a 4-0 victory against Moldova on Friday.

“The results and the performances were good,” said South Korea coach Paulo Bento, who has been unable to call star forwards Son Heung-min and Hwang Hee-chan. They have picked up injuries playing for their respective English Premier League clubs Tottenham Hotspur and Wolverhampton Wanderers.

Iran is even closer to a third successive World Cup appearance and a sixth overall — a win against Iraq in Tehran will be enough. Coach Dragan Skocic has recalled Mehdi Taremi to the squad after previously omitting the FC Porto striker for critical comments made in an interview.

“I have high expectations, he’s a great player. I’m glad we resolved the disagreement by talking. We have all the best interests of the national team in mind.” Skocic said.

The race for the top two spots is more open in Group B. Saudi Arabia is four points clear of Japan and five ahead of Australia and can take a step closer to a sixth World Cup with a win over Oman in Jeddah.

Australia has appeared at every World Cup since joining the Asian Football Confederation in 2006 and needs to defeat Vietnam, a team that has lost all six games so far in this round of qualification, to stay in touch. Coach Graham Arnold will not be present on the sidelines in Melbourne as the Socceroos coach has contracted COVID-19.

“We have four games that we have to play between now and qualifying for Qatar and I expect to win four games,” Arnold said. “We are here today, where we have everything in our own hands.”

Japan also needs to take three points at home to China ahead of Tuesday’s crunch meeting with Saudi Arabia. The Samurai Blue is just about on course for a seventh successive World Cup spot but will be without Kyogo Furuhashi. The Celtic striker has been in fine form in Scotland but has been struggling for fitness.

“We don’t know the details about his injury,” said Japan coach Hajime Moriyasu. “But because it’s at the level where we were concerned about whether he’d be able to contribute to the team we decided not to call him up this time.”

The trip to Japan is the first game in charge for Li Xiaopeng, who was appointed as China coach in November, taking over from Li Tie. With just one win in six games, China’s hopes of returning to the World Cup for the first time since its 2002 debut are virtually over, although the team can start preparation for the 2023 Asian Cup, which it will host.

A top US official in the Pacific has warned that America would have to “respond” if the Solomon Islands allows China to establish a military base there.Following a “constructive and candid” 90-minute meeting with prime minister Manasseh Sogavare, ambassador Daniel Kritenbrink said that the security deals between China and the Solomon Islands present “potential regional security implications” for the US and other allies.“We wanted to outline for our friends in the Solomons what our concerns are,” Mr Kritenbrink, US assistant secretary for East Asian and Pacific Affairs, told reporters.“We have respect for the Solomon Islands’ sovereignty. But we also...
FOREIGN POLICY・26 DAYS AGO
Business Insider

International order will be thrown out the window if Russia is able to escape consequences over its invasion of Ukraine, US Gen. Mark Milley told CNN.
POLITICS・25 DAYS AGO
Newsweek

"No one wants to see the outbreak of a third world war," Chinese Foreign Ministry spokesman Wang Wenbin told reporters during a briefing.
CHINA・26 DAYS AGO

The former F-35 test pilot Billie Flynn told The Aviationist that moving to the "cosmic spaceship" that is the F-35 was too much to ask of MiG pilots.
AEROSPACE & DEFENSE・26 DAYS AGO
The US Sun

I took in a Ukrainian refugee to live with my wife and me… then ran off with her after ten days. We’re in love

A DAD of two has run off with a Ukrainian refugee just ten days after he and his partner welcomed her into their home. Security guard Tony Garnett, 29, walked out on Lorna, 28, after falling head over heels for 22-year-old Sofiia Karkadym. Tony, of Bradford, West Yorks, said: “We’re...
WORLD・1 DAY AGO
The Independent

Vladimir Putin is so popular in Russia that he has the “political space” to withdraw his forces from Ukraine, said Boris Johnson.The prime minister said the Russian president still has “massive backing” from his own people despite international outrage over the invasion.“The Russian public overwhelming back Putin,” Mr Johnson told Talk TV. “Therefore he has the political margin for manoeuvre from within Russia … Putin has far more political space to back down, to withdraw.”The PM added: “There could come a point when he could say to the Russian people, ‘The military-technical operation that we launched in Ukraine has...
POLITICS・25 DAYS AGO
Business Insider

The Kremlin has refused to acknowledge its death toll in Ukraine, though a spokesperson admitted that Russia suffered "significant losses."
MILITARY・27 DAYS AGO
ohmymag.co.uk

Blackout and crisis preparedness expert Herbert Saurugg has recently warned against the complete power grid blackout that could plunge entire Europe into darkness. He predicts a widespread blackout could be lurking in the not too distant future and such an event can cause extremely chaotic conditions worldwide. However, those who are prepared for an emergency can definitely bridge the difficult days well.
ENERGY INDUSTRY・27 DAYS AGO

The intelligence the U.S. shared with Ukraine helped it continue to resist Russian invading forces and even shoot down a transport plane carrying hundreds of Russian troops, a new report revealed. According to current and former U.S. officials who spoke with NBC News on Tuesday, the U.S. provided critical intelligence...
MILITARY・25 DAYS AGO
Business Insider

A superyacht worker claims the vessel’s captain once had to deploy sonic weapons against Kalashnikov-wielding pirates on inflatable boats in the Arabian Sea. The episode was one of many surreal scenes an anonymous worker detailed in a piece published Sunday in The Times of London. The captain, according to...
PUBLIC SAFETY・26 DAYS AGO
97.1 FM Talk

In an interview with Russian TV, Sergei Lavrov said that Russia is essentially at war with NATO. This rhetoric has some worried that Russia may use nuclear weapons in Ukraine. Lt. Col. Dakota Wood weighed in on the likelihood of this happening.
POLITICS・25 DAYS AGO
The Independent

Kim Jong-un has vowed to bolster North Korea’s nuclear forces at “maximum speed” in a defiant speech during a massive military parade on Monday night.In his speech, Mr Kim also made an open threat that North Korea would use its “nuclear forces” against countries that provoked it.The military parade that started late on Monday night showcased the country’s largest-known intercontinental ballistic missile (ICBM) among other weapons.“We will continue to implement measures aimed at strengthening and developing our country’s nuclear forces at the maximum speed,” Mr Kim told his troops and the crowd gathered for the parade at a Pyongyang...
POLITICS・26 DAYS AGO
Insider

"They might as well just burn us all inside our homes," a user commented online, referring to how the structures are fire hazards.
PUBLIC HEALTH・27 DAYS AGO
Sportsnaut

International 2022 to be played in Singapore

Valve confirmed Sunday that The International 2022 will be held in October in Singapore, marking the first time the Dota
VIDEO GAMES・14 MINUTES AGO
Reuters

May 23 (Reuters) - New Zealand Prime Minister Jacinda Ardern will visit the United States this week in a bid to boost exports and lure more tourists as the Pacific nation looks to fully reopen its border after more than two years of restrictions. Ardern's visit comes as U.S. President...
POLITICS・23 MINUTES AGO