Cruise tourism stocks weren't immune from the stock market rout on Monday. As we sail into the final hour of trading, shares of all the major publicly traded cruise line companies -- Royal Caribbean (NYSE: RCL) , Norwegian Cruise Line Holdings (NYSE: NCLH) , and Carnival Corporation (NYSE: CCL) -- are low in the water, down 1.8%, 2%, and 3.2%, respectively, as of 3:20 p.m. ET.

Cruise stocks faced a whole series of "wall of worries" today. First, there are familiar concerns over the continuing pandemic and how it might affect cruise demand, and the CDC's warning still isn't helping with that.  Last week brought worries that higher interest rates might make paying down cruise line debt difficult. Our latest concern is that Russia might invade Ukraine ( again! ), and upset stock markets even more.

Of the three, I believe that the mixed messaging from the CDC about whether cruises are safe, and the risk of interest rate hikes making debt refinancing more expensive, are the concerns investors should focus on. However, a Russian invasion of Ukraine wouldn't likely affect cruise tourism much at all in the Caribbean or even in the Mediterranean markets, but only in the Black Sea. 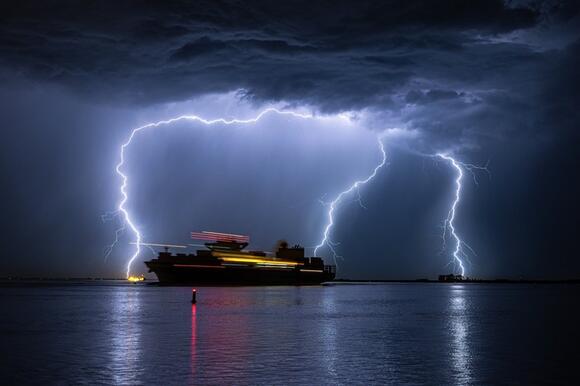 That being said, an expanding conflict between Russia and Ukraine would have some effect on the Black Sea market. While not a big part of their operations, each of Carnival, Royal Caribbean, and Norwegian Cruise do run some cruises in the Black Sea, and you have to assume those cruises would be canceled in the event bullets begin flying in the region.

A corollary concern that investors should also keep on their radar is the widely floated theory that China might use the presumed distraction created by a Russian invasion of Ukraine to launch an assault of its own on Taiwan. Ordinarily, of course, military conflicts primarily concern investors in defense stocks . But a scenario in which war breaks out between China and Taiwan, and potentially draws in allied nations in the region, would have vast implications for the much larger cruise tourism market in Southeast Asia and the South Pacific.

Even a remote possibility like this one would have a significant enough effect upon cruise stocks that I think investors need to be aware that it's a possibility -- and a potential catalyst that could push cruise stocks even lower.

10 stocks we like better than Carnival
When our award-winning analyst team has a stock tip, it can pay to listen. After all, the newsletter they have run for over a decade, Motley Fool Stock Advisor , has tripled the market.*

They just revealed what they believe are the ten best stocks for investors to buy right now... and Carnival wasn't one of them! That's right -- they think these 10 stocks are even better buys.

Why Planet Labs Stock Went to the Moon Today

And why BlackSky and Maxar Technologies are both joining Planet up there.
AEROSPACE & DEFENSE・15 HOURS AGO
Fortune

Sign up for the Fortune Features email list so you don’t miss our biggest features, exclusive interviews, and investigations. U.S. tariffs on Chinese imports survived a change in administration, but the trade-war-era levies may not survive record inflation. “We’re certainly looking at where we see costs being raised and,...
PRESIDENTIAL ELECTION・29 DAYS AGO
Business Insider

A multi-decade infrastructure super-cycle is underway that should present significant tailwinds.
STOCKS・2 DAYS AGO
US News and World Report

WASHINGTON (Reuters) - The United States on Tuesday offered a reward of up to $10 million for information on six people it described as Russian military intelligence officers who had conducted cyber attacks affecting critical U.S. infrastructure. The six officers work in a cyber-focused unit of Russia's Main Intelligence Directorate...
PUBLIC SAFETY・29 DAYS AGO
The Motley Fool

Deere stock has come down in price, and there are some headwinds worth monitoring.
STOCKS・20 HOURS AGO
Entrepreneur

This is an important segment of the population with purchasing power that is practically ignored by advertising campaigns.
ECONOMY・29 DAYS AGO
The Motley Fool

These stocks could be good places to park your money.
STOCKS・17 HOURS AGO