NYC illegal guns: Where are they coming from, what can be done? 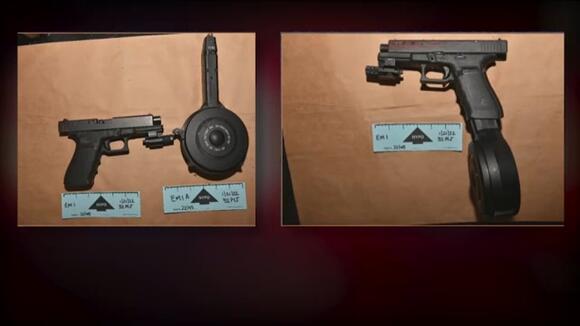 Amid an alarming spike in gun violence in New York City, 7 On Your Side Investigates where the guns are coming from and what can be done to stop them from getting into the hands of killers. The gun used to kill officer Jason Rivera and critically injure officer Wilbert Mora Friday night in Harlem was a Glock with a high capacity magazine. It was reported stolen in Maryland five years ago. "We don't make guns here," Mayor Eric Adams said. "How are we removing thousands of guns off the street and they're still finding their way into New York City." 7 On Your Side Investigates found a majority of the guns used to commit crimes in New York over the past five years have come from other states, especially the south. ALSO READ | Wounded NYPD officer fights for life; funeral plans announced for partner

Most of them are states with less restrictive gun laws like Georgia, Virginia and South Carolina. "It's the iron pipeline," said Darrin Porcher, a former NYPD lieutenant and criminal justice expert. "We want to marry into a relation with the ATF and have police officers with the NYPD work in these investigative task forces with the ATF to ensure that illegal gun dealers in places like South Carolina, Virginia, North Carolina and Florida are not selling guns to the wrong people." He said local police can't travel out of state to get guns, they need the feds to do that. Mayor Eric Adams told Eyewitness News he has discussed the issue with President Joe Biden. "We need to close those loopholes and we have not and that's the help we need from the federal government," Mayor Adams said. We found gun arrests have gone up by a lot in New York City since 2018, by 52%. But at the same time, fewer people have been charged with felony and misdemeanor gun crimes. "Of course you're going to have less charges against individuals that are in possession of firearms, I don't think there should be an eradication of stop and frisk, I just think it should be used as a poignant tool, it needs to be more specific," Porcher said. The mayor announced on Monday his blueprint to cut down on crime .

Candace McCowan reports from Lower Manhattan, as Mayor Eric Adams prepares to roll out his plan to deal with NYC's rising tide of crime.

It includes pushing for spot checks at tunnels, bus and train terminals for illegal weapons. In addition to allowing prosecutors to move faster to press gun charges, and to raise the penalties for gun trafficking. ---------- DO YOU NEED A STORY INVESTIGATED? Dan Krauth and the 7 On Your Side Investigates team at Eyewitness News want to hear from you! Call our confidential tip line 1-877-TIP-NEWS (847-6397) or fill out the form BELOW. You can also contact Dan Krauth directly: Email your questions, issues, or story ideas to 7OnYourSideDan@abc.com Facebook: DanKrauthReports Twitter: @ DanKrauthABC7 Instagram: @DanKrauth

“Let’s make stop and frisk more specific” does Adams want to have only white people stopped and frisked, because according to BLM and the 1619 CRT drivel, everything bad is white people’s fault?

"How are we removing thousands of guns off the streets and they are still find in their way into New York City?" The short answer is CRIMINALS

The arrests were part of Operation Long Island Wave, and those arrested were wanted for offenses including homicide, attempted murder, narcotics, weapons offenses, robbery and assault.
CENTRAL ISLIP, NY・1 HOUR AGO
ABCNY

Happy the elephant has lived at the Bronx Zoo for 45 years, but the New York State Court of Appeals will now decide if she is a person.
NEW YORK CITY, NY・9 HOURS AGO
ABCNY

COVID isn't over. One example is the fact that some 20 New York City judges are now COVID positive after they attended a retreat in Montauk last weekend, according to published reports.
NEW YORK CITY, NY・3 HOURS AGO

The Supreme Court is set to rule on a case that could transform the landscape of what guns are legally allowed to be carried in New York.
NEW YORK CITY, NY・2 DAYS AGO
ABCNY

An on-duty EMT was shot in the back of an ambulance by a drunk and disorderly patient Wednesday night, according to police.
STATEN ISLAND, NY・18 HOURS AGO
ABCNY

Transport Workers Union Local 100 officials said bus operators are tired of being treated like punching bags, and they detailed the changes they want during the event outside the Kingsbridge Bus Depot in Inwood.
NEW YORK CITY, NY・23 HOURS AGO
ABCNY

The shockwaves from the tragedy in Buffalo are being felt in New Jersey after the shooter's writings mentioned three towns by name, including two in Ocean County and one in Hudson County.
TOMS RIVER, NJ・2 DAYS AGO
ABCNY

For the second time this year, a Rockland County community has had to take action after a racist incident during a school sporting event.
PEARL RIVER, NY・4 HOURS AGO

A 20-year-old was shot in face and killed after meeting with alleged motorcycle sellers under the Deegan Expressway.
BRONX, NY・18 HOURS AGO
ABCNY

Two people were found dead in a burning car in the Bronx were both fatally shot, and a double murder investigation is now underway.
BRONX, NY・11 HOURS AGO
ABCNY

A family is mourning their 18-year-old son who was killed in a freak accident on Jersey Shore beach Tuesday while on vacation with his family.
TOMS RIVER, NJ・1 DAY AGO

An on-duty EMT was released from the hospital after being shot in his shoulder while treating an allegedly drunk and disorderly patient inside his ambulance on Staten Island Wednesday night.
STATEN ISLAND, NY・1 HOUR AGO
ABCNY

New York City is preparing to honor the late rapper Christopher Wallace, better known as Biggie Smalls and the Notorious B.I.G., who would have turned 50 on May 21.
BROOKLYN, NY・10 HOURS AGO
ABCNY

The NYPD said they are stepping up patrols outside Black houses of worship in response to the mass shooting in Buffalo.
BUFFALO, NY・3 DAYS AGO