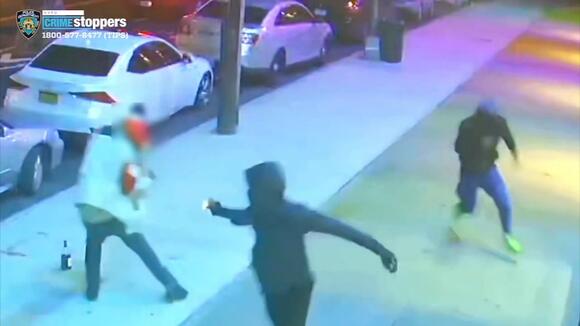 Whether it's a residential street in the Bronx or a subway station in Midtown, Manhattan, New Yorkers feel more vulnerable than they have in years. "It's just a very sad situation, what's going on in New York City," one Harlem resident said. "I hope New York City gets better." Violent crime has been rising over the past two years, with crazed, unstable people in the subways and fearless teenagers with guns. Shootings that once took place in back alleys now happen on crowded streets in the middle of the afternoon, gang members blasting at one another with bystanders caught in the crossfire. Among the latest victims is an infant, struck in the face with a stray bullet . RELATED | Bronx DA Darcel Clark to man who shot baby girl: 'You're not going to get away with it'

Police officers are being shot, and unsuspecting subway riders are being attacked at random. Others are being robbed. In the past two months, it's become an onslaught. "Certainly the levels of safety that we saw during the last 10 years are now being reversed, and it's a serious moment," Citizens Crime Commission of New York President Richard Aborn said. "No one should undermine how serious this is." There were 485 murders in New York City in 2021, the highest total in 10 years. There were also more than 1,500 shootings, the highest in 15 years and double the number just two years ago. And underground, major felonies are surging. "It's not just the law, you know, it's people thinking that they can get away with whatever they want," Darcel Clark, Bronx District Attorney Darcel Clark said. "That's where we are now, which is really scary. Just a total disrespect for humanity." ALSO READ | Mayor Adams unveils New York City's 'Blueprint for Safety' to combat violence

Aborn said early intervention is key. "The age at which somebody first picks up a gun is getting younger and younger and younger," he said. "We now have 12- and 13-year-olds picking up guns and carrying. We really better, increasingly better focus on that." Aborn believes Mayor Eric Adams understands the crisis -- but needs to act quickly. "I think he has a very short window to put a cap on the rise in crime," Aborn said. "I think it will come down, but it's going to come down gradually." He is convinced that targeted anti-gun patrols can be done legally, and that federal agents have a role to play. "We need to set up true interstate strike forces to go after the illegal guns coming up what we call the 'Iron Pipeline' from Pennsylvania, the Carolinas, Texas, Alabama and Georgia and Virginia," he said. "The feds could help us do that tomorrow morning." ALSO READ | MTA officials address alarming rise in crime, promise more uniformed officers on platforms

Clark is convinced that coordinated investigations will help turn the tide. "We're putting together investigations that are phenomenal," she said. "And once we get them now, it's going to be able to stick because every agency is working together." ---------- * Get Eyewitness News Delivered * More New York City news * Send us a news tip * Download the abc7NY app for breaking news alerts * Follow us on YouTube

Lack of education, a lot of adolescents can not read well enough to get a well-paying job, some were raised to steal and fight ( some parents call it survival), COVID locked people down long enough so they became more hostile. An idle mind is the devil’s playground.

Watch out for crazy Gorillas in the mist, they attack at random, be careful it's like a Jungle out there with wild Apes on the streets!

How can Adams understand this when he never walked a beat. He was a desk transit cop. All he knows about the streets is which corner outside city hall has the coffee truck.

Happy the elephant has lived at the Bronx Zoo for 45 years, but the New York State Court of Appeals will now decide if she is a person.
NEW YORK CITY, NY・8 HOURS AGO
ABCNY

In the wake of the horrific grocery store shooting in Buffalo, Governor Kathy Hochul outlined new proposals in an effort to stop dangerous individuals from getting deadly weapons.
BUFFALO, NY・22 HOURS AGO
ABCNY

Two people were found dead in a burning car in the Bronx were both fatally shot, and a double murder investigation is now underway.
BRONX, NY・10 HOURS AGO
ABCNY

Transport Workers Union Local 100 officials said bus operators are tired of being treated like punching bags, and they detailed the changes they want during the event outside the Kingsbridge Bus Depot in Inwood.
NEW YORK CITY, NY・22 HOURS AGO
ABCNY

COVID isn't over. One example is the fact that some 20 New York City judges are now COVID positive after they attended a retreat in Montauk last weekend, according to published reports.
NEW YORK CITY, NY・2 HOURS AGO
ABCNY

While still not at pre-pandemic levels, subway ridership continues to set new high watermarks in the push to return to normalcy.
NEW YORK CITY, NY・1 HOUR AGO

A 20-year-old was shot in face and killed after meeting with alleged motorcycle sellers under the Deegan Expressway.
BRONX, NY・17 HOURS AGO
ABCNY

An on-duty EMT was shot in the back of an ambulance by a drunk and disorderly patient Wednesday night, according to police.
STATEN ISLAND, NY・17 HOURS AGO
ABCNY

Fire ripped through the same buildings back on October 8, 2021. One firefighter sustained minor injuries battling this morning's inferno.
BRONX, NY・1 DAY AGO

A man has been arrested and charged for the brutal murder of a 60-year-old pawn shop owner in Queens.
QUEENS, NY・17 HOURS AGO
ABCNY

The NYPD said they are stepping up patrols outside Black houses of worship in response to the mass shooting in Buffalo.
BUFFALO, NY・3 DAYS AGO
ABCNY

The girl, an innocent bystander who was a half block away when the gunfire erupted, is identified as 11-year-old Kyhara Tay of the Bronx.
BRONX, NY・1 DAY AGO
ABCNY

Graphic video shows three suspects attacking two men, lifting one up and slamming him onto the ground.
MANHATTAN, NY・1 DAY AGO
ABCNY

A former clerk in a bookstore was inspired to write his own novels, and now, Adrian McKinty's bestsellers are prominently displayed in the same Upper West Side Barnes & Noble where he worked for two years.
NEW YORK CITY, NY・4 HOURS AGO