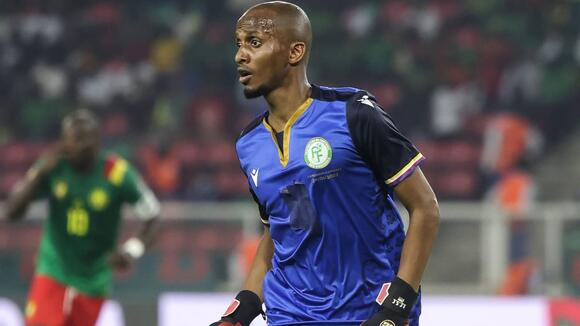 It was the first time an outfield player started as a goalkeeper at a major international tournament, and he fared quite well.

Chaker Alhadhur became a national hero for Comoros on Monday, even in defeat that resulted in elimination from the Africa Cup of Nations.

The left back, forced into playing goalkeeper due to an injury and positive COVID-19 tests to the island nation's rostered players at the position, was valiant in a 2–1 loss to host Cameroon in the round of 16.

As if the task wasn't tall enough for Alhadhur and Comoros—whose manager was also forced to miss the match after testing positive for COVID-19—the side was reduced to 10 men after just seven minutes following a red card to captain and center back Nadjim Abdou. Nevertheless, the 132nd-ranked side in the world held out until the 29th minute and made a game of it late before bowing out.

Alhadhur made four saves and acquitted himself well, especially on one sequence in which he turned away consecutive shots to keep it a one-goal deficit at the time.

Alhadhur is said to be the first field player to feature at goalkeeper from the start of a match in a major international tournament. With Comoros No. 1 Salim Ben Boina out hurt and the two reserves unable to clear COVID-19 protocol, that left the side with no alternatives. Competition rules state that as long as a team has 11 players eligible, regardless of positions, it must play on.

Even after conceding to Lyon's Karl Toko Ekambi for the opener and then to the competition's leading scorer, Vincent Aboubakar, in the 70th minute, Comoros made a game of it. Youssouf M'Changama's stunning free kick in the 81st minute brought the underdogs within a goal forcing Cameroon to sweat out the final minutes before securing advancement.

Alhadhur's heroics put an end to Comoros's run, which included a stunning ouster of Ghana from the competition following a memorable 3–2 triumph . It was the first time that Ghana failed to get out of the group stage since 2006. Alhadhur and Comoros caught the eye of African great and Ivory Coast legend Didier Drogba, who praised their effort.

Alhadhur was the second field player to go into goal in this tournament, with Ivory Coast forced into putting Serge Aurier in net for the final minutes of a group-stage game vs. Sierra Leone. Its goalkeeper was injured and forced off after the side had used up all of its substitutes.

Cameroon will play Gambia after the latter's 1–0 win over Guinea earlier Monday, which continued its storybook run in the tournament. Gambia is the 150th-ranked side in the world in the most recent FIFA ranking.

The French forward announced his stay in Paris with a big game.
SOCCER・2 DAYS AGO
Sports Illustrated

Lyon Takes Back Its Throne, Beats Barcelona in UWCL Final

Catarina Macario made history as the first U.S. player to score in a UEFA Champions League final as part of Lyon’s impressive opening to the match in Turin.
UEFA・2 DAYS AGO
Sports Illustrated

Mbappé’s decision to spurn Real Madrid is a win for PSG and the star’s bank account, but so many aspects of the deal speak to the odiousness engulfing the game.
UEFA・10 HOURS AGO
Sports Illustrated

The Italian star danced past his defender before scoring one of his five goals in Turkish Super Lig action on Sunday.
PREMIER LEAGUE・1 DAY AGO

The longtime member of PSG scored a goal in his final game with the club on Saturday amid rumored transfer to Juventus.
SOCCER・2 DAYS AGO
Sports Illustrated

The Swedish striker was at the center of the newly crowned Italian champions’ party.
PREMIER LEAGUE・9 HOURS AGO
Sports Illustrated

Leeds United tried to sign Brenden Aaronson in the January transfer window, but it will bring the U.S. winger to the Premier League this summer instead.
MLS・8 HOURS AGO
Sports Illustrated

Manchester City released a statement apologizing to the goalie.
PREMIER LEAGUE・1 DAY AGO

Pep Guardiola’s side has now won the Premier League for the fourth time in the last five seasons, holding off Liverpool yet again.
PREMIER LEAGUE・1 DAY AGO
Sports Illustrated

The French superstar isn’t going anywhere after all, spurning a long-expected move to Real Madrid to stay put on a new three-year deal.
UEFA・2 DAYS AGO
The Guardian

‘What can I do?’ asks the Australian after a straight-sets defeat to 13-time French Open champion Rafael Nadal
TENNIS・2 HOURS AGO
Sports Illustrated

A euphoric moment went awry for the musician and dedicated fan of the Premier League champions.
PREMIER LEAGUE・7 HOURS AGO