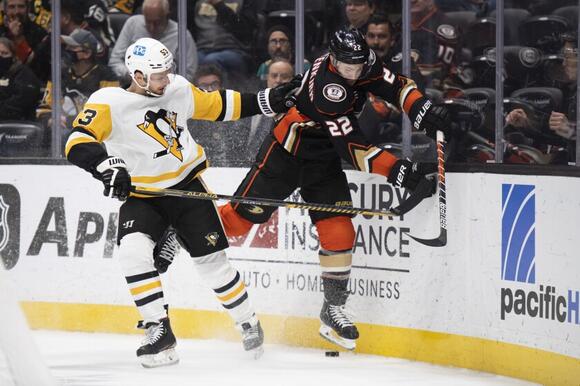 Pittsburgh Penguins forward Teddy Blueger will miss 6-to-8 weeks after having surgery to repair a fractured jaw.

Blueger was injured when Winnipeg's Brenden Dillon hit him into the glass on Sunday in the first period of Pittsburgh's 3-2 shootout victory over the Jets.

Blueger left a trail of blood as he skated slowly from behind the Winnipeg net to the Penguins' bench. The game was delayed several minutes while crews cleaned up the ice.

The 27-year-old Blueger has eight goals and nine assists in 40 games this season while playing a vital role on Pittsburgh's NHL-best penalty-killing unit and centering the fourth line.

The Penguins, who are 16-2 in their last 18 games, host Arizona on Tuesday night.

The Orlando Magic won the NBA draft lottery and landed the No. 1 overall pick for the first time since they got Dwight Howard nearly two decades ago
ORLANDO, FL・2 DAYS AGO