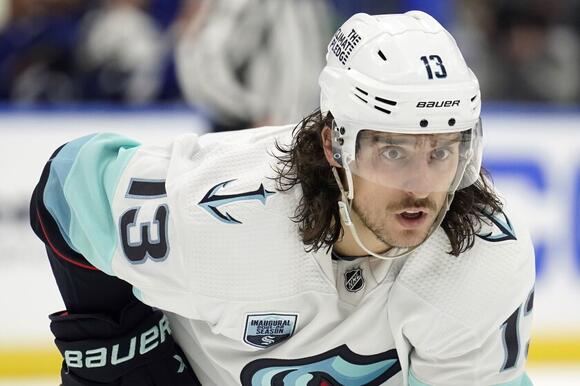 With his relentless energy, frenetic playing style and a history of goofy headshots , Brandon Tanev quickly became the fan favorite on the Seattle Kraken's inaugural roster.

Even though he is now out for the season with a serious knee injury, Tanev and the Kraken are finding ways to keep one of the team's most popular players involved in strengthening the connection with fans in the new NHL market.

“Connecting with the fans, obviously it’s been great since I’ve been drafted here in the expansion draft and there’s great opportunity for myself to continue to reach out and be a part of the community and have different experiences with the fans,” Tanev said. “Recovery process is going to be tough and long, but at the same time, there’s an opportunity here to kind of branch out.”

The Kraken announced Monday that Tanev will be taking on an outreach role with the team while continuing his recovery from surgery to repair a torn ACL in his right knee. Tanev was injured on Dec. 18 against Edmonton and underwent surgery on Dec. 30. He is expected to be ready for the start of the 2022-23 season.

Tanev finished the season with nine goals and six assists and his energy on the ice was key for the Kraken. He scored six goals in Seattle’s first eight games after becoming the expansion draft selection from Pittsburgh. Tanev is under contract with the Kraken through the 2024-25 season.

“Our medical team here is doing a great job of getting me back on my feet and progress is going well,” Tanev said. “It’s just a day to day process of getting better and feeling better, and it’s nice to be around the guys and lifting spirits.”

Tanev doesn’t seem to have an official title, but “ambassador” might be the best description. His role could include stopping in at a youth hockey clinic, jumping on a virtual meeting with season-ticket holders or making an appearance at another outreach event through the team.

His most visible role to the masses, though, will be on television. Tanev is expected to occasionally join the team’s local TV broadcasts.

“It’s a different aspect that I’m not used to. And I think it’s going to be an opportunity to have some fun and connect with everybody in the broadcast booth,” Tanev said. “Have some fun, maybe throw some subtle jabs at some teammates along the way and see how they take it.”

Johnny Gaudreau scored 15:09 into overtime to lift Calgary past the Dallas Stars 3-2 in Game 7 to give the Flames just their second playoff series win in the last 17 years
NHL・11 HOURS AGO
San Diego Union-Tribune

LEADING OFF: Pirates try for a hit, absent M's in Toronto

The Pirates head to Wrigley Field seeking a slightly more convincing victory a day after beating the Reds 1-0 despite having zero hits
SAN DIEGO, CA・8 HOURS AGO

D'backs, Orioles picking themselves up after 2021 failures