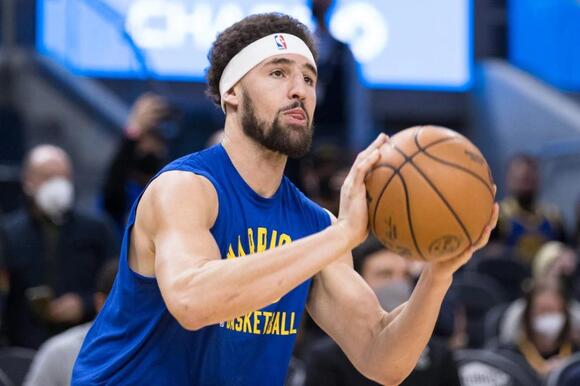 Head coach Steve Kerr said Thompson is questionable to play Tuesday. Thompson was a late scratch on Sunday due to discomfort in the knee.

“Nothing too concerning,” Kerr said Monday, “just part of the cautiousness.”

Kerr said Thompson could continue to rest as a precaution.

The 31-year-old Thompson has played six games since returning from surgeries to repair the ACL in his left knee and a separate operation on his right Achilles, costing him more than 941 days between games.

Thompson is on a strict minutes limit with a maximum of 24 minutes in a game, and will only play in one of a pair of games when the Warriors are scheduled for a back-to-back.

Kerr said in early January that the Warriors wouldn’t follow a manual in determining how to handle Thompson’s up-ramp toward a regular schedule.

Now that the 2021-22 postseason is in full bloom, it’s time to check in on our NBA Playoff predictions with
PHILADELPHIA, PA・1 DAY AGO
Sportsnaut

The Phoenix Suns were looking to punch their ticket to the Western Conference Finals Sunday evening at home. Everything was
PHOENIX, AZ・2 DAYS AGO
Sportsnaut

Despite the absolute brilliance of Giannis Antetokounmpo, he wasn’t enough to lead the Milwaukee Bucks to back-to-back NBA championships. With
MILWAUKEE, WI・1 DAY AGO
Sportsnaut

Minnesota Timberwolves guard Patrick Beverley knows how to talk his trash on and off the court. Chris Paul of the
PHOENIX, AZ・1 DAY AGO

The Golden State Warriors and Dallas Mavericks will do battle in the NBA Western Conference Finals. The winner of this
PHOENIX, AZ・1 DAY AGO
Sportsnaut

Giannis Antetokounmpo and his Milwaukee Bucks are coming off an ugly Game 6 home loss to the Boston Celtics with
MILWAUKEE, WI・2 DAYS AGO
Sportsnaut

The Indiana Pacers are going to make at least one headline trade this summer after a second consecutive down season
INDIANAPOLIS, IN・2 HOURS AGO

Warriors guard Gary Payton II out for Game 1, not series

Gary Payton II could still return during the Western Conference finals, but the defensive whiz will not play in Game
SAN FRANCISCO, CA・4 HOURS AGO
Sportsnaut

The Phoenix Suns finished with the best record in the NBA only to suffer a humiliating Game 7 loss in
PHOENIX, AZ・1 DAY AGO
Sportsnaut

When the NBA made the decision to introduce the Play-In Tournament following the regular season, we heard all about it,
NBA・2 HOURS AGO
Sportsnaut

Each NBA offseason, the head coaching wheel begins to spin. For the Charlotte Hornets, that process has begun to take
CHARLOTTE, NC・6 HOURS AGO
Sportsnaut

The Seattle Storm, troubled by a three-game losing streak, will try to get back on track Wednesday night when they
1 HOUR AGO
Sportsnaut

Luka Doncic and the Dallas Mavericks opened up a 10-point lead after the first quarter in their Game 7 matchup
PHOENIX, AZ・2 DAYS AGO
Sportsnaut

Bookmark. Save. Do your thing. We will be providing constant updates on this page as it relates to the biggest
NBA・6 HOURS AGO
Sportsnaut

The Miami Heat will begin pursuit of further Eastern Conference finals success when they host the Boston Celtics on Tuesday
BOSTON, MA・1 DAY AGO
Sportsnaut

The NBA salary cap for the 2022-23 season has reportedly been set at $122 million. According to Shams Charania of
NBA・1 DAY AGO
Sportsnaut

Count Patrick Beverley as one who’s ignored the rapid decline of James Harden over the past few seasons. Sure, it’s
PHILADELPHIA, PA・4 HOURS AGO
Sportsnaut

It doesn’t take much to spark a frenzy among the NFL community. Our latest example of this craze came when
NFL・8 HOURS AGO