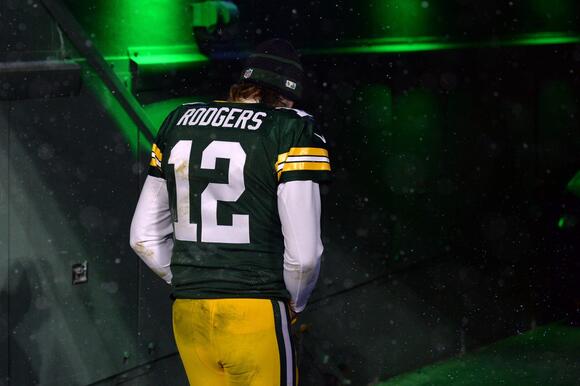 According to oddsmakers, the chances that Aaron Rodgers finds himself in Black and Gold next season are pretty good.

After the Denver Broncos (+200), the Steelers are considered the second favorite team to acquire the MVP quarterback (+350), according to BetOnline.ag .

When it comes to the odds that Rodgers will remain in Green Bay, oddsmakers are saying its likely he’s played his last game for the Packers.

Rodgers has been flirting with the Mike Tomlin and the Steelers all season long, but it would take a lot for the Packers to give up a quarterback who could possibly win his second-straight league MVP.

Claypool: I ‘work my ass off’ to be best WR in NFL

While Steelers receiver Chase Claypool claims to not be bothered by it, there’s certainly a sense that public perception might’ve gotten under his skin during a 2021 season that, while productive, also could be characterized as disappointing.
PITTSBURGH, PA・1 DAY AGO
93.7 The Fan

Arians, Whaley react to Khan being hired as Steelers GM

Super Bowl champion coach and former Steelers offensive coordinator Bruce Arians and other are reacting to the hiring of Omar Khan as the team’s next general Manager.
PITTSBURGH, PA・2 DAYS AGO
93.7 The Fan

Omar Khan has been officially named the new Steelers General Manager. The former Vice President of Football and Business Administration has signed a four-year deal.
PITTSBURGH, PA・2 DAYS AGO
93.7 The Fan

‘It’s stealing for me’ Myles Jack happy with Steelers

Listen to what LB Myles Jack told 93.7 The Fan as the big reason he came to the Steelers and how he’s building a relationship with Devin Bush
PITTSBURGH, PA・2 DAYS AGO

Khan says he will not change a lot, great relationship with Tomlin

Around the organization for over 2 decades, new Steelers GM Omar Khan talks about his philosophy in changing & how he will work with Mike Tomlin
PITTSBURGH, PA・1 DAY AGO
Sports Illustrated

The Browns running back is confident that his current teammate will be successful, no matter where he ends up in the future.
CLEVELAND, OH・27 MINUTES AGO
93.7 The Fan

As the Pittsburgh Steelers made their way through the first week of OTA’s, Robert Spillane had another priority on his mind. Spillane and the Steelers announced that the linebacker proposed to his girlfriend, Shelby
2 HOURS AGO
93.7 The Fan

How did Omar Khan get in the position to be the Steelers next general manager? Hear from Khan as he describes all he wants to do in his new role
PITTSBURGH, PA・1 DAY AGO

Just over 48 hours after the official announcement of Omar Khan as the new general manager of the Pittsburgh Steelers, a group of new front office hires were made.
PITTSBURGH, PA・20 HOURS AGO
Sports Illustrated

The resolution calls for changing the window of availability for prospective head coaches.
NFL・32 MINUTES AGO