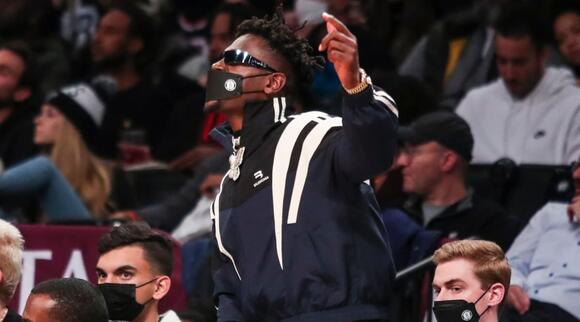 Brown covered a lot of ground, posting a meme critical of three teams at once.

Weeks have gone by since Antonio Brown‘s abrupt departure from the Buccaneers . But following Tampa’s loss to the Rams on Sunday afternoon, Brown didn't hold off on trolling his former coach Bruce Arians, as well as others he's crossed paths with over the last few years in the NFL.

Brown shared a graphic, titled “Antonio Brown was lowkey right about everything” on Monday afternoon. Below the text and a picture of Brown himself, were photos of Arians slapping Tampa Bay safety Andrew Adams on the helmet, Steelers receiver JuJu Smith-Schuster dancing at midfield and a Raiders logo.

Brown hasn't been shy about his criticism of Arians since his release by the Buccaneers.

Arians was fined $50,000 by the league for his slap of Adams. It's not the first time that Brown has brought attention to the moment over the last few weeks.

Brown and Smith-Schuster were wide receivers for Pittsburgh during Brown's final few years with the Steelers. Smith-Schuster had a breakout season in 2018, catching 111 passes for 1,426 yards and seven touchdowns. Brown turned in massive numbers in his own right, tallying 104 receptions for 1,297 yards and 15 touchdowns. Many expected Smith-Schuster to build on his previous season after Brown's departure , but he's struggled to reach those heights again.

After his departure, Brown said he felt disrespected by a Smith-Schuster tweet that showed him catching a touchdown against the Raiders, posted shortly after Brown was traded to Oakland.

In August, Smith-Schuster revealed to Michael Irvin that Brown has blocked his cell phone number, as well as all social media platforms, preventing him from reaching out to try and patch up the relationship.

Brown never played in a game for the Raiders, the third target of Monday's post. After being acquired by the team after an acrimonious exit from Pittsburgh, his training camp in 2019 saw a series of bizarre incidents. Brown drew significant fines from then-general manager Mike Mayock, with whom he had a verbal altercation .

After apologizing to the organization, Brown demanded his release the next day. He then went on to sign with the Patriots, the only one of his former teams that didn't draw scorn on Monday. Brown played one game with the team before being released following allegations of sexual misconduct by a former trainer .

Mayock was fired by the Raiders last week after the team's playoff loss, months after coach Jon Gruden resigned following the release of emails containing racist, misogynistic and anti-LGBTQ language .

While the Buccaneers, Steelers and Raiders have all had their struggles in the wake of Brown‘s exits, based on his recent behavior, it's unclear whether he'll get another NFL opportunity.

The league was thinking about filling the St. Louis void before the Rams officially relocated.
LOS ANGELES, CA・2 DAYS AGO
Sports Illustrated

The three-time Pro Bowler said Kelly “is cooler than most people give him credit for. He’s definitely a bright mind, he’s smart.”
BATON ROUGE, LA・2 DAYS AGO
Sports Illustrated

The team has reportedly had to settle multiple lawsuits and dealt with organizational turnover in the past year.
LAS VEGAS, NV・2 DAYS AGO
Sports Illustrated

On Gronkowski’s 33rd birthday, his longtime quarterback hinted towards his impending decision as a free agent.
TAMPA, FL・1 DAY AGO

The longtime college football commentator is preparing for his inaugural season calling NFL games on a regular basis.
NFL・1 DAY AGO
Sports Illustrated

Antonio Brown Says He Wants to Retire With Steelers

He spent the first nine seasons of his career in Pittsburgh.
1 HOUR AGO
Sports Illustrated

Aidan Hutchinson Reminds Lions GM of Another No. 2 Pick

He had a direct comparison for the former Michigan defensive end.
NFL・2 DAYS AGO
Sports Illustrated

The former Saints quarterback will leave his studio role with the network after just one season.
NEW ORLEANS, LA・22 HOURS AGO

The Lions receiver wore No. 18 to honor Megatron during rookie minicamp.
NFL・1 DAY AGO
Sports Illustrated

If you want a backup QB for your roster, these three offer good value.
NFL・1 HOUR AGO
Sports Illustrated

Dallas’s owner had a clear message about the future of the Cowboys.
DALLAS, TX・1 HOUR AGO

The 33-year-old spent time with the Chiefs and Steelers in 2021.
MIAMI, FL・21 HOURS AGO
Sports Illustrated

Todd Bowles Confirms There Is No Timetable for Rob Gronkowski

“We chopped it up… It was never anything negative. Ryan [Tannehill] is a good dude… Everything is cool.”
NFL・2 DAYS AGO
Sports Illustrated

Green Bay’s star corner will now be with the franchise through 2026.
GREEN BAY, WI・3 HOURS AGO
Sports Illustrated

How Cincinnati is moving past the Super Bowl loss. Plus, final thoughts on the 2022 schedule, an inside look at the Chargers’ viral anime video and more.
NFL・5 HOURS AGO