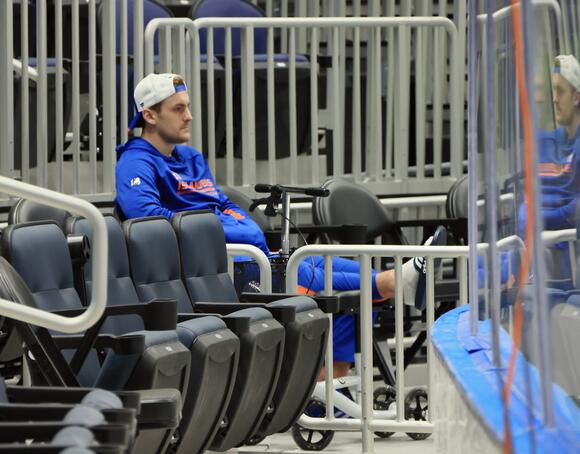 Defenseman Ryan Pulock suffered a lower-body injury blocking a shot by Lightning forward Mathieu Joseph during the Isles’ 4-1 loss in Tampa on November 15th, and has since missed 22 games and counting. His absence has extended beyond the original four-to -six-week estimate, and the hope is that he will soon be able to return to the lineup.

Pulock, who also recently spent time in COVID-19 protocol, has been skating away from the group, and his teammates are eager to see him back on the ice shortly.

“It will be huge to get Ryan back,” said fellow defenseman Adam Pelech. “He’s obviously a great player and very important to our team so I think we’re all looking forward to that.”

Pulock and injured forward Kyle Palmieri were both again absent from practice on Monday at the Northwell Health Ice Center in East Meadow. They will both certainly miss Tuesday night’s game against the Philadelphia Flyers at UBS Arena, and there isn’t a date set in stone for their return.

But there could be a light at the end of the tunnel.

“They’re both still on IR,” said head coach Barry Trotz. “They’re day-to-day, going through the process of coming back. Hopefully soon. I don’t have a date yet.”

As far as Pulock’s absence is concerned, it has given more responsibility to Noah Dobson, who has emerged as an offensive threat from the blue line, registering 14 points (five goals, nine assists) in 32 games this season. The Islanders have also seen the growth of rookie defenseman Robin Salo, who recently scored his first NHL goal and has also dished out two assists over 15 games.

“He’s been getting better and better every game and he’s proven himself that he belongs here and he’s been good up here for us,” said Pelech of Salo. “I think when a guy like Ryan goes down, it takes the whole group to kind of step up and I think that’s what we’ve done.”

The question is…who is the odd man out when Ryan Pulock returns?

With plenty of back-to-backs, it could mean a game off here and there for Andy Greene and/or Zdeno Chara, or it could mean that Salo is returned to Bridgeport of the American Hockey League so he can continue playing on a regular basis.

The bottom line for the Islanders is that Pulock’s return would be a huge spark for the team…and as far as who is in and who is out, well, strength in numbers would certainly be a nice problem to have.

Gerard Gallant changed up his lines and the new top line responded, Igor Shesterkin stood on his head again…and the MSG faithful gave that much extra push for the Rangers’$2 3-1 win in Game 3 against Carolina.
NEW YORK CITY, NY・1 DAY AGO
WFAN Sports Radio

Igor Shesterkin was on top of his game in a must-win game three for the Rangers on Sunday, and nobody around the team was surprised in the slightest.
NEW YORK CITY, NY・10 HOURS AGO