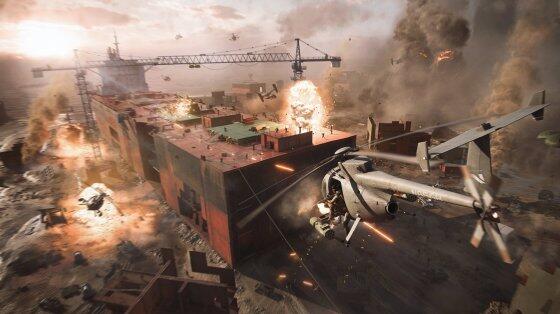 Could EA and DICE’s shooter Battlefield 2042 become free-to-play? A new report suggests that might be the case, and gamers who paid for the game when it launched are not happy about that.

Battlefield 2042 might go down in history as one of the biggest flops in video game history. Per VG247, an insider from EA claims that the game’s developer DICE is considering going the free-to-play route. The drastic move is a product of the game flopping tremendously after it launched back in November.

The game looked promising based on the trailers that we saw ahead of the game’s release. Battlefield 2042 arrived plagued with the issues that thankfully have been addressed through many patches, but that’s not stopping the mass exodus of players due to a lack of content to keep them coming back. To put in context just how many people are not playing Battlefield 2042 , more gamers are currently playing Battlefield V and Battlefield 1 on steam.

DICE has been mum about Battlefield 2042, giving no insight on the future of the game and what its future will look like. Video game insider Tom Henderson pointed out that in a new video he dropped, he says EA is considering making one of the game’s components free-to-play. As to what component exactly? Henderson claims it could either be Portal, or Hazard Zone, with Portal more than likely being chosen due to its popularity and the possibility it could lead to gamers purchasing the whole game.

This news announcement has been met with substantial criticism, especially from gamers who have already paid full price for the game.

It’s totally understandable for gamers who paid their hard-earned money on Battlefield 2042 , but this could also be what the game needs to become what it was promised to be finally.

You can peep more reactions in the gallery below.

HHW Gaming: Here Is When You Scare The Daylight Out of Yourself While Playing ‘Dead Space’ Remake

Get your rig and plasma cutter ready. Motive Studios revealed when Dead Space fans would be heading back to the USG Ishimura.
VIDEO GAMES・6 DAYS AGO
HipHopWired

HHW Gaming: ‘The Division 2’ Gets An Extra Life With The Arrival of Season 9 Roadmap

Remember Tom Clancy's The Division 2? Well, it's still here and is getting some much-needed new content.
VIDEO GAMES・9 DAYS AGO
HipHopWired

It looks like video game studios are slowly transitioning away from the PS4 and Xbox One, and we think that is a good idea. Gotham Knights will be the next big video game that only next-generation console owners will be able to enjoy.
VIDEO GAMES・7 DAYS AGO
HipHopWired

Your boring white console is getting some more flavor with the addition of these new PS5 console covers. But it will cost you some coins. The post HHW Gaming: 3 New PS5 Console Covers Are Dropping In June appeared first on The Latest Hip-Hop News, Music and Media | Hip-Hop Wired.
VIDEO GAMES・19 HOURS AGO

Is Fei Long's run in Street Fighter coming to an end? That might be the unfortunate case.
VIDEO GAMES・7 DAYS AGO