What low blood pressure means and when it can be dangerous 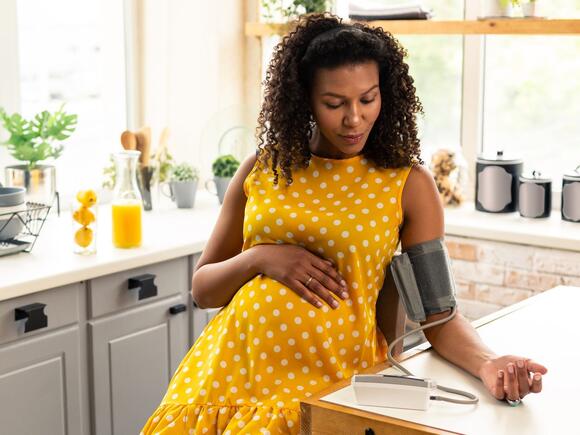 Blood pressure is a measure of the force of blood moving through your artery walls. When that force is too low, your vital organs may not be getting the right amount of blood flow they need to function.

Here's what you need to know about what might cause low blood pressure and when it is considered an emergency.

Low blood pressure with no symptoms is rarely a cause for concern, says Nicole Weinberg , MD, a cardiologist at Providence Saint John's Health Center. In fact, some people have chronic low blood pressure, but feel fine, and do not need to be treated.

However, if low blood pressure is combined with symptoms of dizziness, fainting, shortness of breath , or lightheadedness, it could be a sign that you need medical attention.

The exact cause of low blood pressure is not always clear, Weinberg says, but some common causes include:

In addition, postural or orthostatic hypotension can occur when you quickly rise from a sitting or lying down position, causing a sudden drop in blood pressure and feelings of lightheadedness. This can last for just a few minutes or it can be more severe and cause fainting.

Weinberg says orthostatic hypotension usually isn't a medical emergency unless it persists and you consistently feel lightheaded when you stand.

For someone experiencing an isolated episode of hypotension, Weinberg advises lying down, eating a salty snack, and drinking water — since fluids increase blood volume and can help get your blood pressure back to normal.

When low blood pressure is an emergency

"The likelihood of dying from low blood pressure is low unless it is related to another disease process," Weinberg says.

For example, a blood infection, or sepsis , can result in low blood pressure. Sepsis occurs when the chemicals released by the body to fight an infection trigger widespread inflammation, resulting in blood clotting that reduces blood flow to vital organs, such as your heart, kidneys, and brain. This can progress to septic shock and very low blood pressure, which may be fatal, and should be treated immediately.

Low blood pressure can also be affiliated with Addison's disease — a disorder in which the adrenal glands do not produce enough cortisol, a hormone that helps your body respond to stress. Lack of cortisol production can cause addisonian crisis , which is characterized by low blood pressure and can be fatal without proper treatment.

Low blood pressure , or hypotension, is often not a cause for concern. However, if it accompanies symptoms like fainting, shortness of breath, lightheadedness, or dizziness, you may need medical attention.

Some common causes of low blood pressure include pregnancy, hormonal changes, dehydration, and medication side effects.

Unfortunately, the 27-year-old mother and the 31-year-old father say their baby daughter has months to live. The 1-year-old child is suffering from a rare condition which was caused by a gene defect both parents carry. The parents knew something was wrong with their child when the baby started to go off her food at six weeks. The baby also started to lose weight, the couple said. The condition was confirmed with genetic testing and the doctors said it affects her ability to absorb the nutrients she needs from food. The condition is so rare it is thought to only occur in one in 79,000,000 people, the doctors said.
WEIGHT LOSS・21 DAYS AGO
House Digest

Though helpful for cleaning and disinfecting, Lysol contains a number of harmful chemicals that can irritate your eyes, skin, and respiratory system.
HEALTH・21 DAYS AGO
Daily Mail

Walking at a brisk pace for just 75 minutes every week could cut your risk of depression, a new study finds. The World Health Organization recommends everyone should exercise for at least two-and-a-half hours every seven days. But researchers at Cambridge University, England, found adults who got half as much...
FITNESS・21 DAYS AGO
The US Sun

WHEN little Rio Fowler started to vomit and suffer with diarrhoea, his parents feared he'd been struck by a tummy bug. Mum Karen and dad Ryan said their daughter who was in pre-school had gastro so thought he had caught it off her. The 15-month-old had to be taken to...
KIDS・21 DAYS AGO

MILLIONS of Brits have been urged to take up a rapid test to see if they have bowel cancer. The Health Secretary has called on men over 60 to make sure they have the life-saving checkups. It couldn't be easier - with a home testing kit on offer, or use...
CANCER・22 DAYS AGO
US News and World Report

It’s a story many have heard before. COVID-19 enters a household whether through a spouse, parent, sibling or caretaker – but despite extensive exposure, not everyone gets sick. [. SEE:. Latest Coronavirus and Vaccine News ]. And it could be a more common occurrence than some think. The...
PUBLIC HEALTH・25 DAYS AGO
Insider

Christine Bronstein took at home colon cancer test after seeing blood in her stool. It was positive, but her doctor texted: "You don't have cancer :)"
CANCER・21 DAYS AGO
MedicalXpress

Shielding those vulnerable to COVID-19, while allowing the virus to spread, largely unmitigated, through the rest of the population, would have failed according to a new modeling paper published today in PLOS Global Public Health by University of Bath scientists. Shielding strategies or "focused protection", as advocated for in the...
SCIENCE・21 DAYS AGO

Tragic events like wars, famines, earthquakes, and accidents create fearful memories in our brain. These memories continue to haunt us even after the actual event has passed. Luckily, researchers from Tokyo University of Science (TUS) have recently been able to understand the hidden biochemical mechanisms involved in the selective suppression of fearful memories, which is called fear extinction. The researchers, who had previously demonstrated fear extinction in mice using the chemically synthesized compound "KNT-127," have now identified the underlying mechanism of this compound's action. Their findings have been published recently in Frontiers in Behavioral Neuroscience.
SCIENCE・22 DAYS AGO
Insider

3 signs of avoidant personality disorder, according to a mental health counselor

People with avoidant personality disorder have a pervasive fear of emotional closeness. It stems from a lack of self-esteem starting in childhood.
HEALTH・2 HOURS AGO
The US Sun

A MUM has issued an urgent warning after her son collapsed and started having a fit after having just two puffs on an e-cigarette. Spencer Smith, from Honeywell, was 16 at the time and ended up being rushed to A&E and fighting for his life after inhaling from a vape.
WORLD・21 DAYS AGO
Insider

A medical student discovered she had neck cancer during a class on cancer screening, report says

Gabriella Barboza, 22, was acting as a patient as her teacher demonstrated neck cancer screening, the Post reported. He found signs of the real thing.
CANCER・21 HOURS AGO
Insider

I strength train or cycle 4 times a week and want to gain muscle and energy. A dietitian said to eat more carbs and fats.

A dietitian reviewed an Insider reader's diet and said she eats enough protein but is likely under-eating overall, which can hinder muscle gains.
WEIGHT LOSS・2 HOURS AGO
Insider

In a new case study, doctors say they treated a woman for a heart condition she developed related to high doses of CBD and the supplement berberine.
WEIGHT LOSS・1 DAY AGO
Insider

How does social media affect teenagers? Understanding the mental health impact — and why it's not all bad

Social media can affect teenagers negatively or positively, depending on how they use it. Here's how to talk about social media use with your teen.
KIDS・1 DAY AGO
Insider

You don't have to do cardio for weight loss — lifting weights works just as well, research suggests

Strength training can be as effective for weight loss as cardio, as long as there's a calorie deficit, which means eating less than you burn.
WEIGHT LOSS・1 DAY AGO