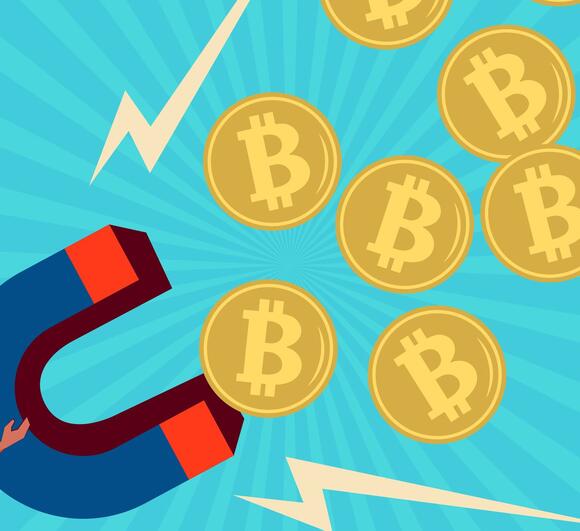 Bitcoin has recouped some losses after it slumped Monday to as low as $32,983, as investors expect the Federal Reserve’s meeting, which will be held on Tuesday and Wednesday, to set the tone for a shift away from its easy-monetary policy started during the pandemic.

The recent tumble marks the second-worst selloff since bitcoin’s bear cycle from 2018 to 2020, according to research firm Glassnode. The fall is only eclipsed by the 54% drawdown in July 2021 from the crypto’s April highs.

The selloff is a continuation of the global “risk-off” trade, said Ben McMillan, chief investment officer at crypto investment manager IDX Digital Assets. Bitcoin has been trading in tandem with stocks lately , though the former posts far greater volatility.

The S&P 500 (SPX) fell into correction territory on Monday amid losses of U.S. stocks broadly, after major indexes recorded their biggest weekly drops since 2020 on Friday.

Crypto investors are also concerned about the White House’s coming moves on crypto regulation, as the Biden administration is poised to release an initial governmentwide strategy for digital assets as soon as next month, according to a Bloomberg report on Friday citing people familiar with the matter.

The recent selloff is “driven disproportionately” by shorter-term holders, which refers to the wallets that owned bitcoin for six months or less, according to McMillan.

“A lot of new buyers came into the asset class relatively recently when it neared all-time highs,” and some of them were attracted by bitcoin futures ETFs, said McMillan.

Tawil echoed the point, saying that “if the bottom persists for a while, it could flush out entirely new and/or weak hands/investors, of all types; some, never to return. And those with staying power will become more influential and important to the sector than ever.”

David Duong, head of institutional research at crypto exchange Coinbase, wrote in Saturday notes that he believes that there is room for more downside in the very short term.

“The culmination of low liquidity, weak earnings, stretched valuations and Friday’s large option expiry likely led to forced systematic selling and triggered the Nasdaq’s convincing breach of the downside channel,” Duong wrote. It will act as a drag on crypto with the negative sentiment persistent early this week, according to Duong.

McMillan said he is seeing more buying pressure as bitcoin gets toward $30k. “$30k is an important support, however, and investors would want to see robust demand at that level before having any conviction of a sustained up move,” McMillan said.

Shares of Deere & Co. DE, -1.10% fell 1.8% toward a three-month low in premarket trading Friday, even after the agriculture, construction and forestry equipment maker reported fiscal second-quarter profit and revenue that rose above expectations, as "strong demand" helped offset supply-chain pressures. Net income increased to $2.10 billion, or $6.81 a share, from $1.79 billion, or $5.68 a share, in the year-ago period. The FactSet consensus for earnings per share was $6.69. Sales grew 10.9% to $13.37 billion, above the FactSet consensus of $13.23 billion. Cost of sales rose 12.5% to $8.92 billion, as gross margin contracted to 33.3% from 34.3%. Production & Precision Agriculture sales rose 13% to $5.1 billion, Small Agriculture & Turf sales increased 5% to $3.6 billion and Construction & Forestry sales rose 9% to $3.45 billion. The company affirmed the sales growth outlook for fiscal 2022. Deere's stock has gained 6.3% year to date through Thursday while the S&P 500.
STOCKS・3 HOURS AGO
MarketWatch

I am 33 years old, I currently make just over $120,000 a year, including an annual bonus, and my company has gifted me with around $300,000 in equity in the firm, although our stock is brand new, so it is constantly swinging up and down. I put around 6% toward a 401(k) and another 4% toward personal savings, investments and emergency cash.
STOCKS・2 DAYS AGO
dailyhodl.com

Silk Road founder Ross Ulbricht is forfeiting billions of dollars worth of Bitcoin (BTC) and other crypto assets to the US government. According to a new court filing, Ulbricht will relinquish any claim to over 69,000 BTC and undisclosed amounts of Bitcoin Gold (BTG), Bitcoin SV (BSV) and Bitcoin Cash (BCH) worth a combined $3 billion as part of a settlement.
PUBLIC SAFETY・25 DAYS AGO

2 Leading Tech Stocks to Buy in 2022 and Beyond

The market sell-off has presented some great buying opportunities for some great companies.
STOCKS・35 MINUTES AGO
FOXBusiness

Tesla CEO Elon Musk said this week that the U.S. must "stop the infighting" in order to be competitive with China, warning that the world's second-largest economy will someday dwarf America's output. "What we’re going to see with China, for the first time that anyone can remember who is alive,...
ECONOMY・2 DAYS AGO
The US Sun

MILLIONS of Americans are set to receive Social Security checks worth up to $1,657 tomorrow. The cash boost will come just 48 hours before Supplemental Security Income payments, worth up to $841, are set to land in around eight million bank accounts on April 29. Seniors with birthdays on the...
BUSINESS・24 DAYS AGO
Business Insider

A top US official in the Pacific has warned that America would have to “respond” if the Solomon Islands allows China to establish a military base there.Following a “constructive and candid” 90-minute meeting with prime minister Manasseh Sogavare, ambassador Daniel Kritenbrink said that the security deals between China and the Solomon Islands present “potential regional security implications” for the US and other allies.“We wanted to outline for our friends in the Solomons what our concerns are,” Mr Kritenbrink, US assistant secretary for East Asian and Pacific Affairs, told reporters.“We have respect for the Solomon Islands’ sovereignty. But we also...
FOREIGN POLICY・24 DAYS AGO
Markets Insider

Indonesia accounts for about half of the world's supply of palm oil — the world's most widely used vegetable oil.
INDUSTRY・25 DAYS AGO
Markets Insider

Tesla has started underwriting auto insurance. Buffett previously said he would bet against any car company becoming a big winner in the space.
ECONOMY・24 DAYS AGO
Entrepreneur

This is an important segment of the population with purchasing power that is practically ignored by advertising campaigns.
ECONOMY・23 DAYS AGO
MarketWatch

Coca-Cola and Colgate-Palmolive both generate plenty of cash flow to support their ever-growing payouts.
STOCKS・32 MINUTES AGO
Reuters

May 20 (Reuters) - The Emir of Qatar Tamim bin Hamad al-Thani expressed optimism on Friday that an agreement between the United States and Iran could be achieved, voicing readiness to help in the matter. Talks to revive a 2015 accord restraining Iran's nuclear programme with world powers have been...
ENERGY INDUSTRY・29 MINUTES AGO
Reuters

SHANGHAI/MILAN, May 20 (Reuters) - Chloe Kou, a 28-year old beauty brand marketing manager from Shanghai, won't be buying her usual "one or two" high-end handbags this year. Instead, she plans to save not spend, and that is a problem for luxury brands. China's current zero-COVID policy, with its attendant...
BEAUTY & FASHION・35 MINUTES AGO
Reuters

BEIJING, May 20 (Reuters) - China's aviation regulator is seeking "whistleblowers" from the industry's frontline workers to plug any safety loopholes, part of the government's efforts to ensure safety after two recent major accidents including the deadly China Eastern crash. In a document issued on May 19, the Civil Aviation...
ECONOMY・30 MINUTES AGO
Entrepreneur

Building Sustainable Wealth Outside Of Legacy Banking: A New Model For A New Era

It's time for a new financial system that rewards all of its participants, not just a select few.
ECONOMY・32 MINUTES AGO
MarketWatch

COLOMBO, Sri Lanka (AP) — Sri Lankan authorities on Friday closed schools and asked public officials not to come to work in a desperate move to prepare for an acute fuel shortage that is expected to last days amid the nation’s worst economic crisis in decades. The Public...
ASIA・7 HOURS AGO