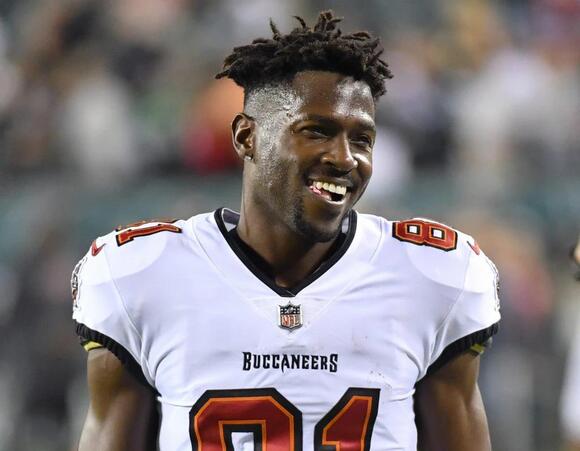 We already know how the Antonio Brown tenure ended with his former Tampa Bay Buccaneers team. Back in Week 17, Brown was seen exiting the field during a game against the New York Jets .

This came after the seven-time Pro Bowl wide receiver got into it with Buccaneers head coach Bruce Arians about whether he could return to the game due to an ankle injury.

Immediately after the game, Arians announced that the embattled pass-catcher was no longer part of the organization. Thus, started a several day span of drama between the two sides with Antonio Brown accusing the Buccaneers of wrongdoing and the team officially moving off him .

One day after trolling the Buccaneers over their loss to the Los Angeles Rams in the NFC Divisional Playoffs, Brown remains in the news.

In a recent interview on the “I AM ATHLETE” podcast, Brown noted that he’s ready to play with Lamar Jackson and the Baltimore Ravens. In response, it seems that the former NFL MVP endorsed that idea. Check it out.

This shouldn’t come as too much of a surprise. Prior to Brown signing with the Buccaneers back in 2020, Jackson pushed his Ravens squad to add him to the mix .

The two obviously have a great on-field relationship despite spending a season as division rivals when Brown was a member of the Pittsburgh Steelers during Jackson’s rookie season back in 2018.

Will Antonio Brown get another chance?

Antonio Brown on interest from NFL teams, via Complex

Whether this is factual remains to be seen. What we do know is that Brown underwent ankle surgery earlier in January after receiving an opinion regarding the injury from individuals outside of the Buccaneers’ organization.

This is the root issue that led to Brown’s shocking premature departure from the Buccaneers.

“Because of my commitment to the game, I relented to pressure directly from my coach to play injured. Despite the pain, I suited up, the staff injected me with what I now know was a powerful and sometimes dangerous painkiller that the NFLPA has warned against using, and I gave it my all for the team,” Brown said in a statement from his attorney earlier in January .

On the field, Brown has proven to be among the best receivers in the NFL during his career. In 15 games as a member of the Buccaneers , he recorded 87 receptions for 1,028 yards and eight touchdowns. Prior to that, the former Central Michigan star was dominant in Pittsburgh — averaging 114 receptions for north of 1,500 yards from 2013-18.

There’s an obvious need for the Ravens, too. They are coming off their first non-playoff season since back in 2017 and have struggled finding Jackson legitimate receiving options behind Mark Andrews and Marquise Brown.

Brett Hundley signed with the Baltimore Ravens and joined the voluntary organized team activities, a portion of the offseason program
BALTIMORE, MD・15 HOURS AGO
Sportsnaut

Earlier on Tuesday, a report broke that the NFL Pro Bowl game could be replaced with powers that be believing
NFL・2 DAYS AGO

After five seasons entirely out of football, former San Francisco 49ers quarterback Colin Kaepernick is back in action. Or at
SAN FRANCISCO, CA・9 HOURS AGO
Sportsnaut

The upcoming Denver Broncos sale is headed towards a crucial point of the bidding process with the remaining five competitors
DENVER, CO・16 HOURS AGO
Sportsnaut

The United States Football League launched its inaugural season in 2022, partnering with Fox and NBC to broadcast spring football.
NFL・19 HOURS AGO

The Sugar Bowl will be played on New Year’s Eve at 12 noon ET on Dec. 31 next season, rather
NEW ORLEANS, LA・8 HOURS AGO
Sportsnaut

The Las Vegas Raiders gave Colin Kaepernick an opportunity to find his way back into the NFL in the form
LAS VEGAS, NV・14 HOURS AGO

Trevor Lawrence was ‘Captain Checkdown’ in 2021 according to PFF

Welcome to the NFL, where every fanbase calls their quarterback ‘Captain Checkdown’ after seeing a conservative approach that comes up
NFL・7 HOURS AGO
Sportsnaut

Minnesota Vikings general manager Kwesi Adofo-Mensah has faith in his starting quarterback Kirk Cousins, but he also understands that the
MINNEAPOLIS, MN・12 HOURS AGO
Sportsnaut

The Indianapolis Colts signed free agent running back Ty’Son Williams on Tuesday, two weeks after the Baltimore Ravens withdrew their
INDIANAPOLIS, IN・2 DAYS AGO
Sportsnaut

Former Ole Miss quarterback Matt Corral came off the board a bit later than expected in the 2022 NFL Draft,
CHARLOTTE, NC・15 HOURS AGO
Sportsnaut

San Francisco 49ers quarterback Jimmy Garoppolo is looking for an opportunity to start with his current team turning the page
SAN FRANCISCO, CA・18 HOURS AGO
Sportsnaut

The Arizona Cardinals and quarterback Kyler Murray have experienced a turbulent offseason with both sides using social media and news
GLENDALE, AZ・17 HOURS AGO