Rob Gronkowski open to 2022 return even if Tom Brady retires 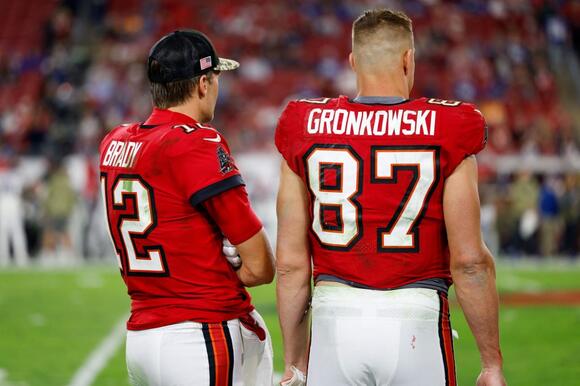 Tampa Bay Buccaneers tight end Rob Gronkowski has played his entire NFL career with Tom Brady as his quarterback. With Brady weighing retirement , many have wondered if Gronk would follow his friend out the door.

Brady’s decision won’t come for weeks, with the future Hall of Famer taking time to reset his mind and make a decision after extensive thought. While Gronkowski will certainly let things play out to see if his best friend is stepping away from football, the 6-foot-6 tight end might not be done with the NFL even if Brady is.

During an interview Monday with 95.5 WDAE, Gronkowski admitted that returning for the 2022 NFL season is a possibility even if Brady announces his retirement.

“I could see a scenario like that – never say never. I’m just going to do what’s best for myself in the football world and we’ll see how I feel in a couple weeks”

A four-time Super Bowl champion and five-time Pro Bowl selection, Gronkowski stepped away from football after the 2018 season. But after a one-year retirement, he returned to join Brady on the Buccaneers’ roster.

It remains unlikely Brady retires, given how close he came to winning in an all-time playoff comeback performance. But if he does, it could open the door for Gronkowski to join another team this fall. 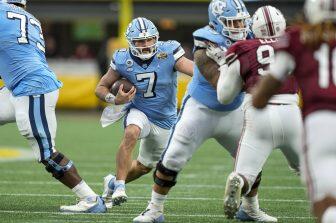 Tampa Bay signed Gronkowski to a one-year, $8 million contract this offseason that carried void years. Just 23 days before the new league year begins, his contract ends and he would become a free agent. Plenty of NFL teams would be interested in landing him, but their only shot will come in the unlikely scenario that Brady hangs up his cleats.

Colin Kaepernick is a step closer to getting back into the NFL. ESPN NFL insider Adam Schefter reported that Kaepernick is scheduled to have a work out with the Las Vegas Raiders on May 25. Kaepernick last played professional football in 2016, which was the same year that he began...
NFL・20 HOURS AGO
Sportsnaut

As a freshman at Clemson, Justyn Ross burst onto the scene with an incredible season paired with Trevor Lawrence, racking
KANSAS CITY, MO・16 HOURS AGO
Sportsnaut

The NFL is expected to decide whether to suspend Cleveland Browns quarterback Deshaun Watson before the season begins, though there’s
CLEVELAND, OH・2 DAYS AGO

Free-agent quarterback Colin Kaepernick has not suited up in an NFL game since New Year’s Day back in 2017. That
PARADISE, NV・19 HOURS AGO
Sportsnaut

Seattle Seahawks scouting exec Alonzo Highsmith will be moving to the opposite corner of the country, back to his home
SEATTLE, WA・1 HOUR AGO
Sportsnaut

Brett Hundley signed with the Baltimore Ravens and joined the voluntary organized team activities, a portion of the offseason program
BALTIMORE, MD・2 HOURS AGO
Sportsnaut

The Las Vegas Raiders gave Colin Kaepernick an opportunity to find his way back into the NFL in the form
LAS VEGAS, NV・1 HOUR AGO
Sportsnaut

Indianapolis Colts cornerback Kenny Moore is unhappy with his contract and not participating in OTA practices, the Indianapolis Star reported
INDIANAPOLIS, IN・22 HOURS AGO
Sportsnaut

How to Watch ESPN and ESPN2 Without Cable

Former Ole Miss quarterback Matt Corral came off the board a bit later than expected in the 2022 NFL Draft,
CHARLOTTE, NC・2 HOURS AGO
Sportsnaut

Before his first days of practice with the Miami Dolphins, Tyreek Hill did not expect to see high-level talent in
MIAMI, FL・1 DAY AGO
Sportsnaut

Joe Burrow has set the standard for success across college football that has become synonymous with his namesake. Any time
NFL・2 DAYS AGO
Sportsnaut

The NFL will soon be exploring yet another revenue stream, as the league is set to launch its own streaming
NFL・15 HOURS AGO