ABC Comedy ‘Maggie’ Moves to Hulu Ahead of Series Premiere 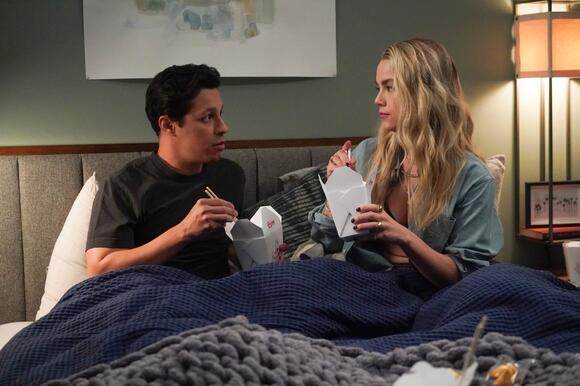 The upcoming ABC comedy series “ Maggie ” will now debut on Hulu rather than the broadcast network, Variety has confirmed.

The single-camera show was originally ordered to series at ABC in May 2021. A premiere date for the newly christened Hulu original will be announced at a later date.

This is the latest example of a show meant for broadcast to make the move to a streaming service owned by the broadcaster’s parent company. ViacomCBS recently moved the CBS dramas “SEAL Team” and “Evil” to Paramount Plus after they had initially aired on broadcast. Meanwhile, Peacock has aired the comedy series “AP Bio” after it was canceled at NBC and debuted the drama “The Lost Symbol” after it was originally developed at NBC.

“Maggie” stars Rebecca Rittenhouse as a young woman trying to cope with life while coming to terms with her abilities as a psychic. It is based on the short film of the same name by Tim Curcio. Along with Rittenhouse, the series stars David Del Rio, Nichole Sakura, Angelique Cabral, Leonardo Nam, Ray Ford, Chloe Bridges, Kerri Kenney, and Chris Elliott.

Last week, Disney named Joe Earley the new president of Hulu after he previously served as head of Disney Plus marketing and operations. He took over from Kelly Campbell, who left to head up NBCUniversal’s streaming service Peacock.

Deadline first reported that “Maggie” was moving to Hulu.

How Jessica Biel Found Empathy for Candy Montgomery in Hulu Series: ‘You’re Still Kind of With Her at the End’

Click here to read the full article. In 1980, Texas homemaker Candy Montgomery was accused of murdering Betty Gore, the wife of the man she was involved with. It was a crime no one saw coming, and that was part of the reason Jessica Biel was drawn to play the role in Hulu’s limited series “Candy.” Starring opposite Melanie Lynskey and Pablo Schreiber, Biel completely transformed — wig, glasses and all — into the character. She also worked double duty as an executive producer on the gory project. When you first picked up this script, why were you interested? The nonlinear storytelling, just...
TV SERIES・2 DAYS AGO
Variety

Click here to read the full article. The “She-Ra” live-action series in development at Amazon has brought on Nicole Kassell to direct, Variety has learned exclusively. Variety previously reported that the show was in early development at the streamer in September 2021. Kassell will direct and executive produce the pilot episode should it go forward. No writer is currently attached. Kassell previously directed and executive produced multiple episodes of the critically-acclaimed HBO series “Watchmen,” which earned her an Emmy nomination and a DGA Award. She has also directed episodes of shows like “Westworld,” “The Leftovers,” “The Americans,” and “Castle Rock.” She most recently...
TV SERIES・3 DAYS AGO
Variety

Click here to read the full article. One week ahead of the highly anticipated return of “Stranger Things,” Netflix has dropped the first 8 minutes of the season in a sneak peek, as well as announcing the episode counts for Season 4’s upcoming two parts. Watch the first 8 minutes below: The first volume will consist of the bulk of the season, with seven of the nine episodes releasing May 27. The remaining two episodes will be released on July 1 as Volume 2 of the season. The episodes are significantly longer than in previous seasons of the show, with most running...
TV SERIES・2 DAYS AGO
Popculture

One of the stars of This Is Us is on the move to a new network in advance of the show's series finale. Deadline reported in March that Chris Sullivan, who plays Toby on the NBC series, will headline a comedy pilot for ABC. His new show is set to be titled The Son In Law.
TV SERIES・25 DAYS AGO

Click here to read the full article. The theater kids of East High are in rehearsal for Season 4. Disney+ has renewed “High School Musical: The Musical: the Series” for a fourth outing, ahead of the Season 3 premiere. In addition to announcing a fourth season, Disney also announced that Season 3 of the musical series will premiere on the streamer July 27. A first look clip from the season has also been released, showing Corbin Bleu, an original cast member from the “High School Musical” film trilogy, appearing as himself in a guest role. The clip can be viewed below. Inspired...
TV & VIDEOS・1 DAY AGO
Hello Magazine

The Today Show stars, including Hoda Kotb, Savannah Guthrie, and Craig Melvin, are reeling from the death of a beloved fellow Today host, one whose hiring onto the show made history at NBC studios. The co-hosts took a moment out of Monday morning's show to honor the legacy of Jim...
CELEBRITIES・27 DAYS AGO
Popculture

Netflix has canceled another one of its major shows, with this one getting the ax after only two seasons. Variety reports that hit sci-fi drama Raising Dion has been dropped by the streamer, following its recent season debut. The news seems to have been revealed by series star Sammi Haney, who shared the news with fans on Instagram. "Sad to say that Raising Dion is CANCELED [sic] Thank you for all of the amazing support we got from all of our wonderful fans!" Haney wrote, in part. "Season 2 was a success, equal to Season 1, even if just looking at how many people watched all of it and wanted a season 3!"
TV SERIES・25 DAYS AGO

After weeks of silence, Chris Rock has finally addressed his now-infamous incident with Will Smith at March's 94th Annual Academy Awards. During another sold-out show at Baltimore's Lyric Performing Arts Center on Friday, Rock directly referenced the slap, but only spent a second on it before moving on with his set.
BALTIMORE, MD・27 DAYS AGO
Outsider.com

It seems Coi Leray is getting fed up with the drama. She and her father, Benzino, have not seen eye to eye for quite some time, and despite numerous attempts to mend their relationship, they keep ending up back at square one. Yesterday, 50 Cent, whose been feuding with Benzino...
CELEBRITIES・28 DAYS AGO

Spring is always a big time for engagements and weddings, and two beloved internet personalities are the latest to update their relationship status. On April 18, Rachel "Seltzer" Quirico revealed she and longtime boyfriend Trevor "TorcH" Housten were tying the knot after 17 years together. Both of them are beloved figures in the esports world, with Seltzer notably starring in the Syfy reality show WCG Ultimate Gamer. She's also hosted numerous esports tournaments and events for TV/streaming outlets; she also made a recent appearance on G4 TV's Boosted.
RELATIONSHIP ADVICE・26 DAYS AGO
Variety

Click here to read the full article. Demon hunters unite in the new trailer for “The Winchesters.” In the first look at the CW’s new “Supernatural” prequel series, narrator Dean Winchester (“Supernatural” star Jensen Ackles) takes viewers back in time to 1972. The story of Sam (played by Jared Padalecki on the original series) and Dean’s family has always been a mystery, but now, Dean wants to finally uncover how the demon-hunting Winchesters came to be. The trailer for the “Supernatural” prequel brings viewers to the night Dean and Sam’s father, John Winchester, met their mother, Mary Campbell. It’s a classic love...
TV SERIES・3 DAYS AGO
Variety

Click here to read the full article. Revered Algerian actor Ahmed Benaissa died on Friday after a long illness, according to the Algerian Ministry of Culture. He was 78. Benaissa’s latest film, Clement Cogitore’s “Sons of Ramses,” (“Goutte d’Or”) in which he had a key role, playing Ramses’s (Karim Leklou) father, is premiering at Cannes on Friday, as a special screening in the Critics’ Week strand of the festival. “I am deeply saddened at the sudden passing of Ahmed Benaissa,” Cogitore said. “The film would not exist without him and words can’t express our sorrow at premiering the film in Cannes today.” “Sons...
MOVIES・2 DAYS AGO
PopCrush

90 Day Fiancé: Before the 90 Days star Johnny Chao is showing off a new look on social media. The reality TV star rocked a fresh-faced look on the show. However, Chao debuted some new facial hair in his most recent post on Instagram. More specifically, he grew a beard and mustache.
TV & VIDEOS・26 DAYS AGO
Variety

How Peyton Manning, Joe Buck Teamed Up for a New Swing at Golf for ESPN

Click here to read the full article. This wasn’t supposed to be Joe Buck’s first assignment for ESPN. The veteran sports announcer raised eyebrows earlier this year by jumping from his longtime roost at Fox Sports to the Disney sports giant, where he and colleague Troy Aikman are set to host “Monday Night Football.” On Thursday afternoon, however, Buck was doing something completely different. Here he was, sitting alongside golf analyst Michael Collins on ESPN2, watching Tiger Woods on the green at the 2022 PGA Championship and talking to baseball great Ken Griffey Jr. about his golf and baseball swings. Even though the...
NFL・2 DAYS AGO
Variety

Hulu Drops Price to $1 per Month for Limited Time

Click here to read the full article. Disney’s Hulu hopes to usher in a raft of subscribers with a new special deal — offering its ad-supported streaming plan for just $1 per month for three months. Starting Friday, new and eligible returning subscribers can sign up for the Hulu with ads package for $1/month for three months. That’s an 86% discount off the regular monthly $6.99/month price for the U.S.-only service. The offer is set to run through 11:59 p.m. PT on May 27 at this link. Ostensibly, Hulu’s new deal is timed for National Streaming Day, the fake May 20 holiday...
TV & VIDEOS・2 DAYS AGO
Complex

Benzino is once again airing out some family business. After previously calling 50 Cent the “first hip-hop rat,” and getting into various other conflicts with his daughter Coi Leray, the rapper has now name-dropped both of them in a Twitter tirade. On Sunday, Fif took to Instagram to...
CELEBRITIES・27 DAYS AGO
Variety

Click here to read the full article. Starz announced that Ava DuVernay is developing an untitled romantic drama, which she will executive produce alongside stars Lauren Ridloff and Joshua Jackson. The series will follow two polar opposites who become intertwined in a love affair that turns their worlds – and those of everyone around them – upside down. The half-hour drama will chronicle what it takes to fall and stay in a radical, rebellious love. One person is ambitious, while the other is restless. One is ready to commit, while the other debates the merits of relationships. One is Black and...
TV & VIDEOS・2 DAYS AGO