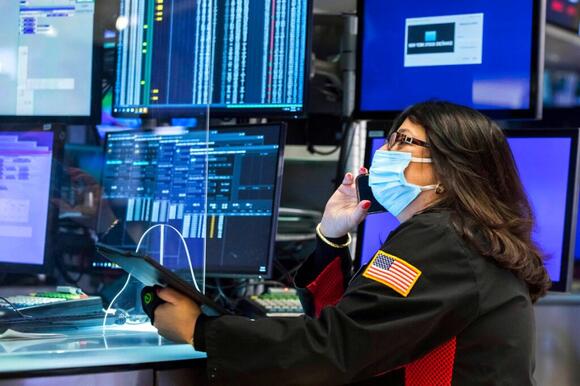 NEW YORK (AP) — Stocks fell sharply on Monday as investors anticipated inflation-fighting measures from the Federal Reserve and fretted over the possibility of conflict between Russia and Ukraine .

The stock market extended its three-week decline and put the benchmark S&P 500 on track for a so-called correction — a drop of 10% or more from its most recent high. The price of oil and bitcoin fell, and so did the yield on 10-year Treasury notes, a sign of investor concern about the economy.

The steady decline in stock prices has come as the Fed has signaled its readiness to begin raising its benchmark short-term interest rate in 2022 to try to tame inflation, which is at its highest level in nearly four decades.

The Fed’s short-term rate has been pegged near zero since the pandemic hit the global economy in 2020 and that has fueled borrowing and spending by consumers and businesses.

But rising prices at supermarkets, car lots and gas stations are raising concerns that consumers will pare back spending to limit the pressure on their budgets. Companies have warned that supply-chain problems and higher raw materials costs could crimp their profits.

The Fed has kept downward pressure on longer-term interest rates by buying trillions of dollars worth of government and corporate bonds, but those emergency purchases are scheduled to end in March. Nudging rates higher is intended to help slow economic growth and the rate of inflation.

“There’s a short-term panic and part of that is the high level of uncertainty around what the Fed is going to do,” said Sylvia Jablonski, chief investment officer at Defiance ETFs.

Jablonski said investors haven’t rushed in to buy stocks during the recent decline. “Buying the dip” has been a hallmark of market optimism for much of the period following the financial crisis in 2008-2009.

The selloff has extended to cryptocurrencies. Bitcoin fell as low as $33,000 overnight but had rallied back above $36,000 in the early afternoon. Still, the digital currency is far below the high of more than $68,000 it hit in November.

CPSC warns against use of infant loungers after 2 deaths

The market is waiting to hear from Federal Reserve policymakers after their latest meeting ends Wednesday. Some economists have expressed concern that the Fed is already moving too late to combat high inflation.

Bond yields edged lower. The yield on the 10-year Treasury fell to 1.72% from 1.74% late Friday. Falling yields weighed on banks, which rely on higher yields to charge more lucrative interest on loans. Bank of America fell 3%.

Soaring food prices both in the U.S. and abroad have prompted countries to ban exports of core agricultural commodities, pushing up domestic food prices and leading agronomists to wonder what additional crops could face supply constraints on their way to grocery stores.
INDUSTRY・1 DAY AGO
abc27 News

YORK, Pa. (WHTM) — York City Police are investigating a death that occurred around midnight on Wednesday morning. According to a release from the York City Police Department, police were dispatched to an address on the first block of State Street, where they found a deceased 32-year-old woman. Detectives are investigating the death as a […]
YORK, PA・4 DAYS AGO
abc27 News

Two men from Philadelphia were arrested in Lancaster on May 16 after being caught with cocaine, methamphetamine, more than $2,500 in cash, and a pistol, according to a release from the Lancaster County District Attorney's Office.
LANCASTER, PA・2 DAYS AGO
Fortune

E-commerce has fallen out of favor with some investors but the long-term opportunity is undeniable.
STOCKS・33 MINUTES AGO
CNN

Silk Road founder Ross Ulbricht is forfeiting billions of dollars worth of Bitcoin (BTC) and other crypto assets to the US government. According to a new court filing, Ulbricht will relinquish any claim to over 69,000 BTC and undisclosed amounts of Bitcoin Gold (BTG), Bitcoin SV (BSV) and Bitcoin Cash (BCH) worth a combined $3 billion as part of a settlement.
PUBLIC SAFETY・26 DAYS AGO
Fortune

Sign up for the Fortune Features email list so you don’t miss our biggest features, exclusive interviews, and investigations. Two Russian oligarchs found dead alongside their families within 48 hours of each other are the latest high-profile executives to die in mysterious circumstances since the beginning of the year.
PUBLIC SAFETY・26 DAYS AGO

MILLIONS of Americans are set to receive Social Security checks worth up to $1,657 tomorrow. The cash boost will come just 48 hours before Supplemental Security Income payments, worth up to $841, are set to land in around eight million bank accounts on April 29. Seniors with birthdays on the...
BUSINESS・26 DAYS AGO
Newsweek

A new Republican-backed law in Florida will repeal Disney’s special tax status, resulting in a property tax increase of up to 25% for residents of Orange County. MSNBC’s Lawrence O’Donnell explains how the move comes as GOP retribution for Disney’s opposition to Florida’s “Don’t Say Gay” bill.April 26, 2022.
FLORIDA STATE・26 DAYS AGO
Business Insider

International order will be thrown out the window if Russia is able to escape consequences over its invasion of Ukraine, US Gen. Mark Milley told CNN.
POLITICS・25 DAYS AGO

MEXICO CITY — Mexican President Andrés Manuel López Obrador on Monday urged U.S. Latinos not to vote in November’s midterm elections for politicians who have “mistreated” them, in response to a comment by former U.S. President Donald Trump. Trump boasted at a rally in...
PRESIDENTIAL ELECTION・25 DAYS AGO
Business Insider

Indonesia accounts for about half of the world's supply of palm oil — the world's most widely used vegetable oil.
INDUSTRY・27 DAYS AGO
Newsweek

The intelligence the U.S. shared with Ukraine helped it continue to resist Russian invading forces and even shoot down a transport plane carrying hundreds of Russian troops, a new report revealed. According to current and former U.S. officials who spoke with NBC News on Tuesday, the U.S. provided critical intelligence...
MILITARY・25 DAYS AGO