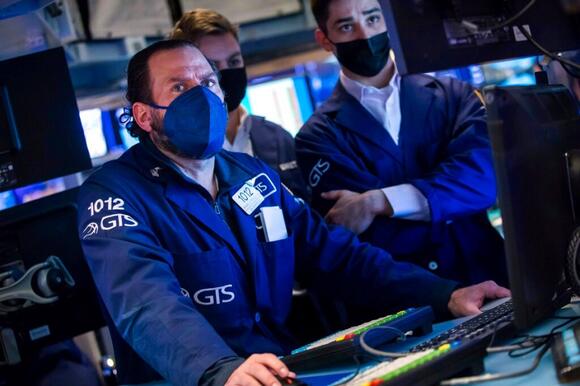 NEW YORK (AP) — The Dow Jones Industrial Average dropped more than 1,000 points Monday as financial markets buckled in anticipation of inflation-fighting measures from the Federal Reserve and fretted over the possibility of conflict between Russia and Ukraine .

Stocks extended their three-week decline on Wall Street and put the benchmark S&P 500 on track to a so-called correction — a drop of 10% or more from its most recent high. The price of oil and bitcoin fell, and so did the yield on 10-year Treasury notes, a sign of investor concern about the economy.

Stocks have fallen sharply so far this year as the market readies for the Fed to raise interest rates to try to tame inflation, which is at its highest level in nearly four decades. The central bank has kept short-term rates near zero since the pandemic hit the global economy in 2020.

The market is waiting to hear from Federal Reserve policymakers after their latest meeting ends Wednesday. Some economists have expressed concern that the Fed is already moving too late to combat high inflation.

CPSC warns against use of infant loungers after 2 deaths

In the U.S. markets, health care stocks were also falling sharply Monday, along with a wide range of retailers. Target fell 1.9% and Pfizer shed 4.4%.

Bond yields edged lower. The yield on the 10-year Treasury fell to 1.72% from 1.74% late Friday. Falling yields weighed on banks, which rely on higher yields to charge more lucrative interest on loans. Bank of America fell 4.4%.

Inflation is putting pressure on businesses and consumers as demand for goods continues to outpace supplies. Companies have been warning that supply chain problems and rising raw materials costs could crimp their finances. Retailers, food producers and others have been raising prices on goods to try and offset the impact.

Rising costs are raising concerns that consumers will start to ease spending because of the persistent pressure on their wallets.

Wall Street also has several key economic reports to look forward this week. Investors will get more data on how consumers feel with the release on Tuesday of The Conference Board’s Consumer Confidence Index for January. The Commerce Department releases its report on fourth-quarter gross domestic product on Thursday and its report on personal income and spending for December on Friday.

MANCHESTER, Conn. (WTNH) – The Manchester police arrested a 20-year-old man for assaulting and stabbing a man through his eye on Thompson Road late Monday night. Manchester police responded to the report of a person stabbed around 11:45 p.m. A 33-year-old victim was found suffering from what appeared to be a stab wound to the […]
MANCHESTER, CT・2 DAYS AGO
WTNH

One injured in Bridgeport shooting on Route 8

BRIDGEPORT, Conn. (WTNH) — Route 8 in Bridgeport closed Tuesday morning after one person was injured in a shooting, Connecticut State Police said. State police responded to the area of Route 8 south at the on-ramp of Exit 5 for a report of shots fired around 5:30 a.m. According to state police, one victim was […]
BRIDGEPORT, CT・2 DAYS AGO
WTNH

WATERBURY, Conn. (WTNH) – A man faces multiple charges for his alleged role in a triple shooting earlier this month in Waterbury. Waterbury police responded to a complaint of shots fired on Walnut Street on May 7. Officers found three victims with gunshot wounds. Police identified the victims as a 26-year-old woman, a 26-year-old man, […]
WATERBURY, CT・1 DAY AGO
Fortune

Never miss a story: Follow your favorite topics and authors to get a personalized email with the journalism that matters most to you. Russia has imposed sanctions against Facebook cofounder Mark Zuckerberg, Vice President Kamala Harris, Bank of America CEO Brian Moynihan, and 26 other Americans. The country’s Ministry of...
U.S. POLITICS・27 DAYS AGO

MILLIONS of Americans are set to receive Social Security checks worth up to $1,657 tomorrow. The cash boost will come just 48 hours before Supplemental Security Income payments, worth up to $841, are set to land in around eight million bank accounts on April 29. Seniors with birthdays on the...
BUSINESS・23 DAYS AGO
Business Insider

The Kremlin has refused to acknowledge its death toll in Ukraine, though a spokesperson admitted that Russia suffered "significant losses."
MILITARY・24 DAYS AGO
Newsweek

Former Russian air defense commander Mikhail Kodaryonok sparked a strong response to his comments that "the entire world is against us."
POLITICS・2 DAYS AGO
Business Insider

Sign up for the Fortune Features email list so you don’t miss our biggest features, exclusive interviews, and investigations. U.S. tariffs on Chinese imports survived a change in administration, but the trade-war-era levies may not survive record inflation. “We’re certainly looking at where we see costs being raised and,...
PRESIDENTIAL ELECTION・23 DAYS AGO
Business Insider

The intelligence the U.S. shared with Ukraine helped it continue to resist Russian invading forces and even shoot down a transport plane carrying hundreds of Russian troops, a new report revealed. According to current and former U.S. officials who spoke with NBC News on Tuesday, the U.S. provided critical intelligence...
MILITARY・22 DAYS AGO
US News and World Report

WASHINGTON (Reuters) - The United States on Tuesday offered a reward of up to $10 million for information on six people it described as Russian military intelligence officers who had conducted cyber attacks affecting critical U.S. infrastructure. The six officers work in a cyber-focused unit of Russia's Main Intelligence Directorate...
PUBLIC SAFETY・22 DAYS AGO

A member of a superyacht crew also told The Times of London that one owner had his bar stools made from whale foreskin.
BOATS & WATERCRAFTS・25 DAYS AGO
Markets Insider

Indonesia accounts for about half of the world's supply of palm oil — the world's most widely used vegetable oil.
INDUSTRY・24 DAYS AGO
Newsweek

As part of a lawsuit between shareholders and Elon Musk regarding his “funding secured” tweet, new text messages and emails between Musk and people involved have been released. The communications pretty much confirmed how most people saw the situation: Elon Musk took a meeting with the head of...
BUSINESS・24 DAYS AGO
Newsweek

The former F-35 test pilot Billie Flynn told The Aviationist that moving to the "cosmic spaceship" that is the F-35 was too much to ask of MiG pilots.
AEROSPACE & DEFENSE・23 DAYS AGO
97.1 FM Talk

In an interview with Russian TV, Sergei Lavrov said that Russia is essentially at war with NATO. This rhetoric has some worried that Russia may use nuclear weapons in Ukraine. Lt. Col. Dakota Wood weighed in on the likelihood of this happening.
POLITICS・22 DAYS AGO