Stocks climb back after 1,000-point slide amid Fed, Ukraine jitters 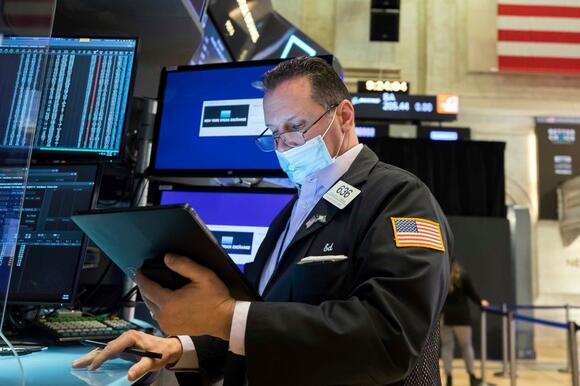 Stocks finished a volatile day slightly higher on Monday after reversing a steep slide caused by uncertainty over inflation-fighting measures from the Federal Reserve and the possibility of conflict between Russia and Ukraine .

A late-day buying spree pushed the benchmark S&P 500 index to a 0.3% gain after pulling it out of so-called correction territory — a drop of 10% or more from its recent high. The Dow Jones Industrial Average had declined more than 1,000 points before rallying and ending higher.

“We’re in this wait-and-see mode, which is almost the most uncomfortable place to be, so I think the market is really grappling with that,” said Lindsey Bell, chief markets and money strategist at Ally Invest.

Monday’s wild turnaround followed a three-week decline for the S&P 500 , concluding with its worst weekly stretch since the start of the pandemic.

The S&P 500 had been down as much as 4% Monday. The index has recovered from an intraday loss that big only three times in the past. The tech-heavy Nasdaq index rose 0.6% after recovering from a nearly 5% descent.

Early in the day, benchmark stock indexes flirted with near 4-month lows as investors anticipated guidance from the Fed later this week about its plans to raise interest rates to tame inflation, which is at its highest level in nearly four decades.

The Fed’s short-term rate has been pegged near zero since the pandemic hit the global economy in 2020 and that has fueled borrowing and spending by consumers and businesses.

But rising prices at supermarkets, car lots and gas stations are raising concerns that consumers will pare back spending to limit the pressure on their budgets. Companies have warned that supply-chain problems and higher raw materials costs could crimp their profits.

The Fed has kept downward pressure on longer-term interest rates by buying trillions of dollars worth of government and corporate bonds, but those emergency purchases are scheduled to end in March. Nudging rates higher is intended to help slow economic growth and the rate of inflation.

“There’s a short-term panic and part of that is the high level of uncertainty around what the Fed is going to do,” said Sylvia Jablonski, chief investment officer at Defiance ETFs.

Bond yields mostly rose after falling earlier in the day. The yield on the 10-year Treasury rose to 1.77% from 1.74% late Friday.

The wave of selling also extended to cryptocurrencies. Bitcoin fell as low as $33,000 overnight but rallied back above $36,000 by late afternoon. Still, the digital currency is far below the high of more than $68,000 it hit in November.

Retailers notched some of the biggest gains in the comeback: Gap jumped nearly 8%.

The market is waiting to hear from chair Jerome Powell Wednesday after Fed policymakers conclude a two-day meeting and offer their latest thinking on the economy and interest rates. Some economists have expressed concern that the Fed is already moving too late to combat high inflation.

A man has been charged with kidnapping and evading arrest after officers say the victim begged for help from a KFC employee.
MEMPHIS, TN・2 DAYS AGO
KTLA

2 arrested months after fatal beating of homeless man in Anaheim

Two homeless people have been arrested months after the fatal beating of another homeless man in Anaheim, authorities said Tuesday. Gilbert Daisaku Johnson was found along the 100 block of West Broadway suffering from head injuries about 3:45 a.m. Nov. 15, 2021. The 32-year-old who had previously lived in Costa Mesa was taken to a […]
ANAHEIM, CA・2 DAYS AGO
KTLA

Ontario police arrested a man suspected of shooting a cashier during a robbery Monday afternoon. Just after 2 p.m., police responded to a liquor store on the 300 block of N. Mountain Avenue for a report of a man who had been shot. When police arrived on scene they found the cashier suffering from a […]
ONTARIO, CA・1 DAY AGO
Fortune

Sign up for the Fortune Features email list so you don’t miss our biggest features, exclusive interviews, and investigations. U.S. tariffs on Chinese imports survived a change in administration, but the trade-war-era levies may not survive record inflation. “We’re certainly looking at where we see costs being raised and,...
PRESIDENTIAL ELECTION・23 DAYS AGO

MILLIONS of Americans are set to receive Social Security checks worth up to $1,657 tomorrow. The cash boost will come just 48 hours before Supplemental Security Income payments, worth up to $841, are set to land in around eight million bank accounts on April 29. Seniors with birthdays on the...
BUSINESS・23 DAYS AGO
The Independent

Vladimir Putin is so popular in Russia that he has the “political space” to withdraw his forces from Ukraine, said Boris Johnson.The prime minister said the Russian president still has “massive backing” from his own people despite international outrage over the invasion.“The Russian public overwhelming back Putin,” Mr Johnson told Talk TV. “Therefore he has the political margin for manoeuvre from within Russia … Putin has far more political space to back down, to withdraw.”The PM added: “There could come a point when he could say to the Russian people, ‘The military-technical operation that we launched in Ukraine has...
POLITICS・22 DAYS AGO
Business Insider

"The West made the fatal mistake of becoming reliant on Russian energy supplies," Mikhail Khodorkovsky said. "The West has to pay for its mistakes."
ENERGY INDUSTRY・24 DAYS AGO
Business Insider

The FBI also seized financial records and fine art in the October 2021 raids on properties linked to billionaire Oleg Deripaska, per Bloomberg.
WASHINGTON, DC・23 DAYS AGO

A new Republican-backed law in Florida will repeal Disney’s special tax status, resulting in a property tax increase of up to 25% for residents of Orange County. MSNBC’s Lawrence O’Donnell explains how the move comes as GOP retribution for Disney’s opposition to Florida’s “Don’t Say Gay” bill.April 26, 2022.
FLORIDA STATE・23 DAYS AGO
americanmilitarynews.com

The Kremlin has refused to acknowledge its death toll in Ukraine, though a spokesperson admitted that Russia suffered "significant losses."
MILITARY・24 DAYS AGO
Business Insider

A member of a superyacht crew also told The Times of London that one owner had his bar stools made from whale foreskin.
BOATS & WATERCRAFTS・25 DAYS AGO
electrek.co

As part of a lawsuit between shareholders and Elon Musk regarding his “funding secured” tweet, new text messages and emails between Musk and people involved have been released. The communications pretty much confirmed how most people saw the situation: Elon Musk took a meeting with the head of...
BUSINESS・24 DAYS AGO
Business Insider

The former F-35 test pilot Billie Flynn told The Aviationist that moving to the "cosmic spaceship" that is the F-35 was too much to ask of MiG pilots.
AEROSPACE & DEFENSE・23 DAYS AGO
US News and World Report

WASHINGTON (Reuters) - The United States on Tuesday offered a reward of up to $10 million for information on six people it described as Russian military intelligence officers who had conducted cyber attacks affecting critical U.S. infrastructure. The six officers work in a cyber-focused unit of Russia's Main Intelligence Directorate...
PUBLIC SAFETY・22 DAYS AGO
Fortune

Sign up for the Fortune Features email list so you don’t miss our biggest features, exclusive interviews, and investigations. Two Russian oligarchs found dead alongside their families within 48 hours of each other are the latest high-profile executives to die in mysterious circumstances since the beginning of the year.
PUBLIC SAFETY・24 DAYS AGO
97.1 FM Talk

In an interview with Russian TV, Sergei Lavrov said that Russia is essentially at war with NATO. This rhetoric has some worried that Russia may use nuclear weapons in Ukraine. Lt. Col. Dakota Wood weighed in on the likelihood of this happening.
POLITICS・23 DAYS AGO
Business Insider

International order will be thrown out the window if Russia is able to escape consequences over its invasion of Ukraine, US Gen. Mark Milley told CNN.
POLITICS・23 DAYS AGO
Newsweek

Putin is no longer interested in negotiating with Ukraine and just wants to seize as much territory as possible instead, report says

Vladimir Putin initially believed in a peace deal with Ukraine but has since changed his mind, people close to him told the Financial Times.
POLITICS・24 DAYS AGO