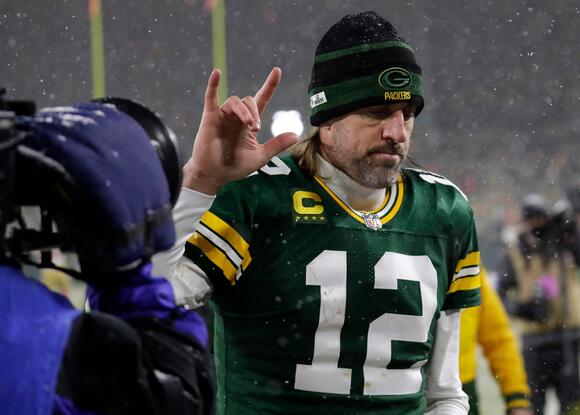 Aaron Rodgers was noncommittal about his playing future in the immediate aftermath of the Packers’ crushing Divisional Round loss to the 49ers, except for one thing. The Packers’ QB unequivocally said he’s not interested in being part of a rebuild.

“I don't want to be part of a rebuild if I'm going to keep playing,” Rodgers said.

That means the pressure is on the Packers, who are almost $45 million over the cap for 2022. They have a litany of free agents, including receivers Davante Adams, Allen Lazard, Marquez Valdes-Scantling and Equanimeous St. Brown and tight end Robert Tonyan Jr. It’s apparent Rodgers doesn’t want to return without some of his trusted pass-catchers. If the Packers are going to field a less competitive team, Rodgers may force his way elsewhere.

But are the Steelers rebuilding, too?

That largely depends on what happens at quarterback. The Steelers snuck into the postseason despite featuring an offense that struggled to move the ball, due to Ben Roethlisberger’s inability to stretch the field. He averaged a measly 6.2 yards gained per pass attempt.

Former Steelers safety and current ESPN analyst Ryan Clark said recently the Steelers would instantly be a mid-tier playoff team with Derek Carr under center. If that’s the case, then Rodgers would probably turn the Steelers into a Super Bowl contender. Pittsburgh has nearly $30 million in cap space, according to Spotrac .

The Steelers feature an athletic receiving corps with Chase Claypool and Diontae Johnson, and Najee Harris gained 1,200 yards on the ground in his rookie season. But they also have one of the worst offensive lines in the league, which was another big reason for their underperformance.

Pittsburgh’s road to the playoffs is more challenging than most other teams. The Bengals promise to be perennial winners with Joe Burrow, and the Ravens are always a factor. The Browns are no longer a pushover, either. But other potential Rodgers suitors play in difficult divisions, too, including the Broncos and Raiders.

Ultimately, the Steelers’ ability to land Rodgers will begin with how much they’re willing to give up. Even with just one year left on his contract, the Packers will likely ask for multiple first-round picks. Historically, the Steelers don’t surrender those kinds of resources for a single player.

That’s also why it’s hard to see the Steelers making a run at Adams, even though he would fit nicely here. Adams promises to be the next expensive receiver on the market.

More than most years, the Steelers’ fate next season could directly correlate with their willingness to part with assets. An aggressive plan could vault them back into championship contention, whereas a conservative strategy may send them towards a rebuild.

Acquiring Rodgers would firmly align the Steelers with the former scenario, assuming he’s interested in coming to Pittsburgh in the first place.

Former Steelers linebacker Vince Williams is now a coach. IT was announced late Monday that Williams is now the linebackers coach for the Pine-Richland Rams football team.
PITTSBURGH, PA・2 HOURS AGO
93.7 The Fan

Antonio Brown says he wants to retire a Steeler

Former Steelers wide receiver Antonio Brown, who is currently out of a job anywhere in the NFL says he wants to come back to Pittsburgh. Brown tweeted the news on Monday.
PITTSBURGH, PA・1 DAY AGO