‘The View’ Destroys Robert F. Kennedy Jr. Over Anti-Vax Movement: “Every Family Has an Idiot” 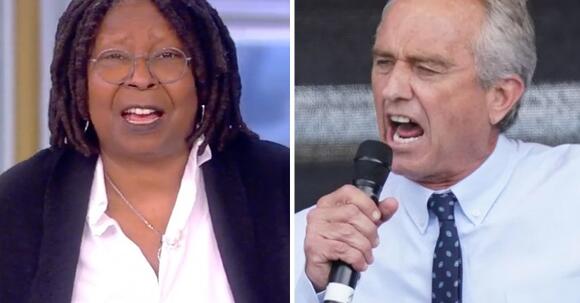 Jen Psaki Offers Advice for Americans Frustrated Over Voting Bill on 'the View': "Have a Margarita"

Ricky Gervais Reveals Why He Wouldn’t Host Oscars on 'The View': "They Wouldn’t Allow Me That Freedom"

On Sunday (Jan. 23), the vocal anti-vax figure drew backlash for likening US vaccine policies to Nazi Germany and the Holocaust.

“Even in Hitler Germany, you could cross the Alps into Switzerland. You could hide in an attic, like Anne Frank did,” Kennedy said. “I visited, in 1962, East Germany with my father and met people who had climbed the wall and escaped, so it was possible. Many died, true, but it was possible.”

“How can anyone be this misinformed? Not just about the vaccine mandates, but about history,” moderator Whoopi Goldberg asked, adding, “Maybe it’s possible because there have been so many deniers. But I find it extraordinary that people who denied the Holocaust are quick to bring it up.”

Guest host Ana Navarro pointed out: “The only reason we’re talking about him is because he is the son of a great man who means so much to American history. But you know what? Every family has an idiot, and obviously the Kennedys are not immune to that.”

She took issue with some anti-vaxxers’ attempts to draw false parallels between US vaccine mandates and the Holocaust. “[It was] such a unique time in history that should be respected as such, and I wonder how Holocaust survivors and their children feel when they hear him make this comparison,” Navarro said.

Navarro added that Kennedy didn’t even have much of an audience, since only a few hundred protestors watched his speech live.

“I could literally get more people to protest my dog,” she said.

RFK is an American hero, trying to save peoples lives and this country, that seems like a weird thing to want to “destroy” “The View, brought to you by Pfizer”

I just can't understand what the views opinion matters at all. Nobody should allow their Marxist rhetoric get to them whatsoever. I don't see where their opinion would matter anyway. I'm sure there's a lot of negative things that could be said about them.

On Thursday, the former president said he would have shunned his former campaign manager had he known that "she thought we lost the election."
PRESIDENTIAL ELECTION・1 DAY AGO
Daily Beast

Sen. Ted Cruz (R-TX) abruptly walked off from a British journalist’s questions about gun violence in America two days after an elementary school massacre in his state left 19 children and two adults dead. Cruz, who is due to appear at a National Rifle Association convention this weekend, became...
CONGRESS & COURTS・1 DAY AGO
Fox News

"We could overhear his father graciously complimenting his Democratic opponent," Conway wrote in her newly-released memoir about the 2016 election.
PRESIDENTIAL ELECTION・2 DAYS AGO