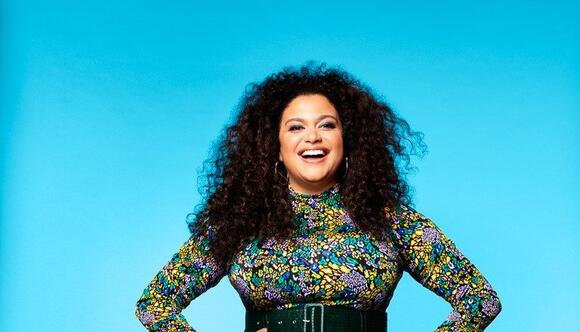 Based on Buteau’s 2020 essay book of the same name, “Survival of the Thickest” stars Buteau as Mavis Beaumont, a Black, plus-size woman navigating life after she finds herself newly single. The series was created by Buteau and Danielle Sanchez-Witzel, who will serve as the showrunner for the series. The series will be executive produced by Ravi Nandan and Alli Reich from A24.

“Survival of the Thickest” follows an overall deal between Sanchez-Witzel and Netflix to develop shows for the streamer. It also continues Buteau’s relationship with the streamer, which includes her original stand-up special “Michelle Buteau: Welcome to Buteaupia,” hosting duties for reality series “The Circle” and “Barbeque Showdown,” and acting appearances in the original series “Tales of the City” and film “Always Be My Maybe.”

“It’s been so damn amazing finding a home with Netflix,” said Buteau in a statement. “To say I’m excited to continue my relationship with them is an understatement. I’m over the moon and I’m under it! Danielle has been a dream partner and I can’t wait to share what we’ve been cooking up.”

Apple TV Plus has shared a behind the scenes featurette for its original series “ Servant .” The psychological horror thriller, which stars Lauren Ambrose, Toby Kebell, Nell Tiger Free, Rupert Grint and Sunita Mani focuses on a married couple who, following the loss of their child, undergo object therapy with a lifelike reborn doll. The third season of the show premiered on Jan. 21. In this featurette, executive producer and director M. Night Shyamalan discusses filming a crucial scene from the first episode of the season. Watch below.

Click here to read the full article. The “Yellowstone” spinoff series “6666” is joining the mothership show on Paramount Network. It was previously reported that the new show would air exclusively on Paramount+. It will now run on the linear network first before episodes are made available to stream on demand. A premiere date has not been set. “6666” was originally announced in February 2021 as one of several new shows on the development slate of “Yellowstone” co-creator Taylor Sheridan. The show takes place at the real 6666 ranch in Texas. It was featured in Season 4 of “Yellowstone,” with Jimmy (Jefferson...
TV SERIES・2 DAYS AGO
Variety

Click here to read the full article. The NBC drama pilot “Found” has cast Kelli Williams, Variety has learned exclusively. Williams joins previously announced series lead Shanola Hampton in the project along with fellow cast member Mark-Paul Gosselaar. The show is built around the fact that, in any given year, more than 600,000 people are reported missing in the U.S. More than half that number are people of color that the country seems to forget about. Public relations specialist Gabi Mosley (Hampton) — who was once herself one of those forgotten ones — and her crisis management team now make sure there...
TV SERIES・2 DAYS AGO
Variety

Click here to read the full article. “Westworld’s” Fares Fares is set to make his directorial debut with a Swedish film titled “A Day and a Half” for Netflix. Fares will also star in the feature alongside Alexej Manvelov (“Chernobyl”) and Alma Pöysti (“Tove”). It is scheduled to hit Netflix in 2023. Inspired by a true story, “A Day and a Half” tells the tale of Artan (played by Manvelov), a man who takes his ex-wife Louise (Pöysti) hostage on a perilous road trip through Sweden with the police in tow. Police officer Lukas (played by Fares) is also along for...
TV & VIDEOS・23 HOURS AGO
Popculture

Click here to read the full article. One week ahead of the highly anticipated return of “Stranger Things,” Netflix has dropped the first 8 minutes of the season in a sneak peek, as well as announcing the episode counts for Season 4’s upcoming two parts. Watch the first 8 minutes below: The first volume will consist of the bulk of the season, with seven of the nine episodes releasing May 27. The remaining two episodes will be released on July 1 as Volume 2 of the season. The episodes are significantly longer than in previous seasons of the show, with most running...
TV SERIES・19 HOURS AGO
Hello Magazine

Robin Roberts got emotional as she opened up about her relationship with partner Amber Laign, especially in the midst of a challenging health battle. The Good Morning America star made an appearance on The Ellen DeGeneres Show to promote her new book, Brighter By the Day. VIDEO: Robin Roberts enjoys...
CELEBRITIES・25 DAYS AGO
The Independent

Laughter erupted in courtroom after Johnny Depp said he doesn’t watch his own movies and couldn’t recall the question he was asked. “I don’t watch them. I feel better not watching them. What was the question again?” Mr Depp said to laughter from the room. Johnny Depp trial – latest updates“Order in the court, or I will have you removed,” Judge Azcarate said. “Understood? Thank you.”The defamation trial between Mr Depp and Amber Heard began on Monday 11 April in Fairfax, Virginia following Mr Depp’s lawsuit against his ex-wife in March 2019. Mr Depp is arguing that she defamed him...
CELEBRITIES・25 DAYS AGO
SheKnows

Click here to read the full article. It seems like everyone was rooting for Renée Zellweger and Ant Anstead to get together, including an unexpected duo: the Property Brothers. Drew and Jonathan Scott recently revealed that they were the ones that ended up getting Zellweger and Anstead to meet, and subsequently fall in love. And their hard work ended up paying off! Back on April 14, 2022, the Scott brothers sat down with ExtraTV to talk about everything from Drew’s upcoming fatherhood to Jonathan loving GF Zooey Deschanel’s Vanity Fair gown. While we loved the entire interview, we’re losing it over...
CELEBRITIES・26 DAYS AGO

The Today Show stars, including Hoda Kotb, Savannah Guthrie, and Craig Melvin, are reeling from the death of a beloved fellow Today host, one whose hiring onto the show made history at NBC studios. The co-hosts took a moment out of Monday morning's show to honor the legacy of Jim...
CELEBRITIES・25 DAYS AGO
PopCrush

Last month it was revealed that Sharon Osbourne would be returning to television, partnered with Piers Morgan on a new U.K. series named The Talk. This comes nearly a year after Osbourne was suspended and eventually exited the U.S. talk show The Talk after expressing her support for Morgan in an intense discussion over race with co-host Sheryl Underwood. Now, in a new interview with the U.K.'s Sunday Times, Osbourne reveals how cancel culture impacted her as she eventually parted ways with her longtime daytime talk series amidst public backlash.
CELEBRITIES・25 DAYS AGO
Insider

Depp said he discovered Disney would not recast him in "Pirates" days after Amber Heard's Washington Post op-ed article was published.
FAIRFAX, VA・25 DAYS AGO
Variety

Click here to read the full article. Faith Hill will never forget one of her earliest auditions. She read for director Anthony Minghella for 2003’s “Cold Mountain” for the role that went to Natalie Portman. “I read, I believe, the rape scene and another one. It was intense,” Hill tells me on the new episode of the “Just for Variety” podcast. “I had been on a few readings, but nothing like that.” Not that she didn’t do her homework beforehand. “I worked my tail off to be prepared for that,” Hill said. “Because for me, personally, I thought I have got to prove...
CELEBRITIES・2 DAYS AGO

After weeks of silence, Chris Rock has finally addressed his now-infamous incident with Will Smith at March's 94th Annual Academy Awards. During another sold-out show at Baltimore's Lyric Performing Arts Center on Friday, Rock directly referenced the slap, but only spent a second on it before moving on with his set.
BALTIMORE, MD・26 DAYS AGO
The Independent

Johnny Depp found humour in a question asked during a Disney executive’s testimony in the ongoing defamation trial brought against ex-wife Amber Heard. In a pre-recorded deposition presented to the court on Thursday (19 May), Tina Newman – who works on the Pirates of the Caribbean franchise – was questioned about Depp’s future in a potential sixth film. “Do you know whether Mr Depp is being considered for a role in Pirates 6?” Heard’s lawyer inquired. To which Newman responded “I don’t know one way or another,” adding that the “decision does not fall within my job responsibilities. It’s...
MOVIES・1 DAY AGO
hotnewhiphop.com

Flo Milli is setting some boundaries. The Alabama native is known for hits like "In The Party," "May I," and "Not Friendly," and while she loves to see fans in the audience having a good time and turning up at her shows, she's not impressed with watching them snort lines from up on stage.
CELEBRITIES・26 DAYS AGO
Outsider.com

“NCIS: Los Angeles” star Daniela Ruah absolutely killed it on the red carpet and stage last night at the International Portuguese Music Awards. While everyone at home was preparing for tonight’s “NCIS: Los Angeles” episode, Daniela Ruah was getting all dressed up to host the IMPA Awards. The ceremony took place at the Providence Performing Arts Center in Providence, Rhode Island, on Saturday, April 23.
LOS ANGELES, CA・26 DAYS AGO
Us Weekly

Putting it all out there. Viola Davis doesn’t have time for critics — especially when it comes to her portrayal of Michelle Obama on Showtime’s The First Lady. The 56-year-old actress told BBC News in an interview published on Monday, April 25, that it is "incredibly hurtful when people say negative things about your work." […]
CELEBRITIES・24 DAYS AGO
hotnewhiphop.com

It seems Coi Leray is getting fed up with the drama. She and her father, Benzino, have not seen eye to eye for quite some time, and despite numerous attempts to mend their relationship, they keep ending up back at square one. Yesterday, 50 Cent, whose been feuding with Benzino...
CELEBRITIES・26 DAYS AGO
Hello Magazine

Gwyneth Paltrow is a doting mom to two teenage children, Apple and Moses, who she shares with ex-husband Chris Martin. The family are notoriously private, but over the weekend the award-winning actress gave a rare insight into their upcoming plans - and how they are changing things up this year for Mother's Day.
FAMILY RELATIONSHIPS・24 DAYS AGO
Variety