On a relatively brighter note, space tourism company Virgin Galactic Holdings (NYSE: SPCE) , which has lost 38% of its stock market value since the new year began, is down "only" 3.4% today. 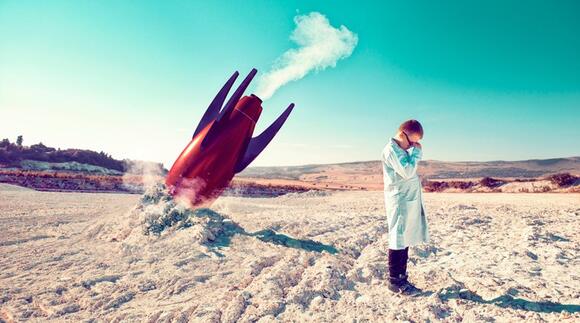 Why are all of these space stocks down today? The truth is that today's sell-off in space stocks doesn't appear to have any single good reason. No analysts have downgraded the space sector today for example, nor even tweaked price targets lower. There's no bad news of any other sort, either. Indeed, what seemed to be potentially bad news for Virgin Galactic last week, when smoke was sighted above a location where Virgin Galactic is known to test its spaceplanes, turned out to be a false alarm .

(It was in fact another space company entirely -- ABL Space Systems -- that suffered an engine failure out there).

You could even argue that bad news for ABL Space, which isn't yet a publicly traded company, is good news for companies like Astra and Rocket Lab -- which are publicly traded, because it emphasizes their success in getting rockets into orbit where myriad competitors have not yet succeeded.

So no bad news today . What about tomorrow? As it turns out, there's little likelihood of bad news for at least another month, because none of the four space companies named above is expected to report earnings until late February, or even March. That means that today's sell-off isn't tied to any bad news leaking out ahead of earnings.

No, when you get right down to it, I think the most likely reason that space stocks are selling off today is because one, everything is selling off (i.e., these stocks got stuck in the middle of a market correction ) and two, these particular stocks are all so new to the public markets (each of them, Virgin Galactic included, came public through the new special purpose acquisition company fad) that they currently lack the kind of earnings that would make them look increasingly cheap as their stock prices fall.

This, I fear, is going to be an ongoing risk to anyone who invests in any of Rocket Lab, Planet Labs, Astra Space, or Virgin Galactic. When investing in these literal moonshots before they have profits -- and before some of them even have revenue -- both volatility in stock prices and, occasionally, even brutal sell-offs are going to be inescapable.

While I won't advise selling them, I do think it's prudent to limit exposure to space stocks to just a very tiny portion of any investor's portfolio -- at least until we learn which, if any, of these stocks will survive their growth phase and eventually earn a profit.

10 stocks we like better than Rocket Lab USA, Inc.
When our award-winning analyst team has a stock tip, it can pay to listen. After all, the newsletter they have run for over a decade, Motley Fool Stock Advisor , has tripled the market.*

They just revealed what they believe are the ten best stocks for investors to buy right now... and Rocket Lab USA, Inc. wasn't one of them! That's right -- they think these 10 stocks are even better buys.

It pays to check these off your list -- and soon.
REAL ESTATE・2 DAYS AGO
inputmag.com

These four tech companies could be providing long-term investors with great price opportunities.
STOCKS・6 HOURS AGO
The Motley Fool

The company recently joined the Fortune 500 list.
STOCKS・2 HOURS AGO
The Motley Fool

Snap's revised lowered guidance and warning took every digital advertising company down with it.
STOCKS・2 HOURS AGO
The Motley Fool

Despite the market sell-off, these biotech stocks have held up exceptionally well.
STOCKS・3 HOURS AGO
The Motley Fool

Nvidia, Meta Platforms, and The Trade Desk are all promising AI plays.
STOCKS・2 DAYS AGO