Stocks recover after plummetting as much as 1,100 points 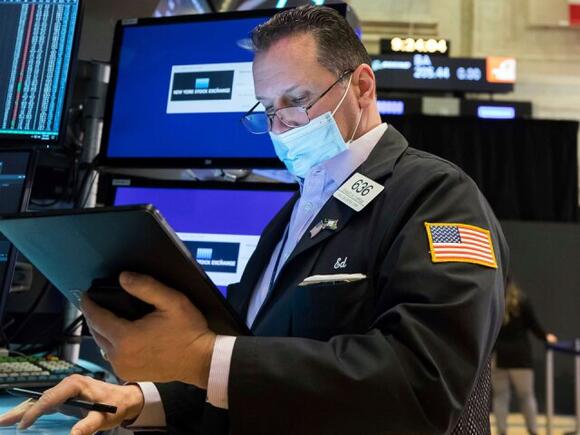 Monday turned out to be a volatile day on Wall Street.

The Dow Jones Industrial Average plummeted as much as 1,100 points this morning but managed to recover by the afternoon, ending the day up about 100 points.

The NASDAQ Composite was down as much as 300 points just after noon but was also in the green by 4 p.m., increasing by about 80 points.

The stock market was headed for the seventh straight day of being in the red before the massive recovery.

Despite Monday's rally, the S&P 500 currently is headed for its worst month since March 2020 when the pandemic began.

Financial experts say the falling stocks are a result of investors anticipating inflation-fighting measures from the Federal Reserve and fret over the possibility of conflict between Russia and Ukraine.

"I think it was surprising how much the market went down today, at least before it came back," said Keith Singer of Singer Wealth Management in Boca Raton.

He sees the overall new year market fall as a correction — a pullback by investors reacting to several things including the empty store shelves, inflation and expected rising interest rates.

"The biggest concern a lot of investors have is the market has been so good because the Federal Reserve has been making the conditions optimal for stocks to grow and the economy to grow. Now, they're doing the opposite," Singer said.

For the professionals on Wall Street, it's part of the risk, but on Main Street, where 401(k)s can rise and fall on these swing days, it can be stressful.

Singer said it's important to keep retirement accounts balanced — not overloaded on one type of stock such as technology. Also, keep in mind corrections in the markets can occur from time to time and most importantly people need to relax.

"I think that you shouldn't worry what's happening on a day-to-day basis because if you have money in the stock market, the idea is over the next 10 to 15 years it will be worth a lot more," Singer said.

Stocks have fallen for much of this year as the market readies for the Fed to raise interest rates to try to tame inflation, which is at its highest level in nearly four decades.

Portions of this article courtesy of the Associated Press

Sign up for the Fortune Features email list so you don’t miss our biggest features, exclusive interviews, and investigations. U.S. tariffs on Chinese imports survived a change in administration, but the trade-war-era levies may not survive record inflation. “We’re certainly looking at where we see costs being raised and,...
PRESIDENTIAL ELECTION・29 DAYS AGO
WashingtonExaminer

WASHINGTON (Reuters) - The United States on Tuesday offered a reward of up to $10 million for information on six people it described as Russian military intelligence officers who had conducted cyber attacks affecting critical U.S. infrastructure. The six officers work in a cyber-focused unit of Russia's Main Intelligence Directorate...
PUBLIC SAFETY・29 DAYS AGO
Reuters

May 26 (Reuters) - Two months into harsh COVID-19 lockdowns that have choked global supply chains, China's economy is staggering back to its feet, but businesses from retailers to chipmakers are warning of slow sales as consumers in the country slam the brakes on spending. Car sales in the world's...
PUBLIC HEALTH・35 MINUTES AGO
Reuters

BEIJING, May 26 (Reuters) - If global automakers think they can extend their dominance in China into the electric era, they may be in for a shock. Kings of the combustion age such as General Motors and Volkswagen are falling behind local players in the booming electric vehicle (EV) market in China, a country that's key to funding and developing their electric and autonomous ambitions.
ECONOMY・1 HOUR AGO
The Independent

Outsourcing giant Serco has hiked its full-year profits outlook as stronger-than-expected trading is helping it offset the hit from the end of the Government’s Covid-19 test and trace programme.The firm said it now expects underlying trading profit of around £225 million this year – up £30 million on previous guidance and “significantly” better than it feared in February.It had warned over the impact from the end of test and trace – a loss of £220 million worth of revenues in the first half and £260 million in the second half.We have had a strong start to the year, and it...
BUSINESS・41 MINUTES AGO

Apple is raising base pay for retail workers to $22 an hour as workers push to unionize: reports

Apple's retail employees have been pushing to unionize, with some citing rising costs of living as a reason.
LABOR ISSUES・26 MINUTES AGO