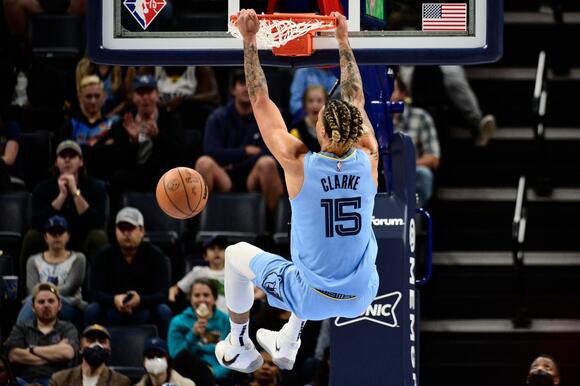 Welcome back to your Grizzlies Insider, where the season has begun and we deliver the latest NBA news and analysis straight to your inbox twice a week.

One day, people will stop asking Ja Morant about trying to score on the league’s best rim protectors. Until then, the Memphis point guard is going to continue to go straight to the box score.

Following a loss to the Dallas Mavericks on Sunday night, Morant, again, made the point that he would attack the rim even if the Jolly Green Giant was standing in the painted area.

“I’ve said this before and I’m going to say it again,” Morant said. “I don’t care who is at the rim when I’m attacking. It’s that simple.”

Then he scanned the sheet of paper in front of him, finding the statistic he needed.

His most recent quote comes a few games after his sideline interview following a game-winning shot at Cleveland, where he said, “I don’t fear nobody, dawg.”

And, yes, Ja, everyone believes you.

Morant currently ranks third in the NBA in points in the paint per game, behind former MVPs Nikola Jokic and Giannis Antetokounmpo. He’s the only guard in the top 10 of that  category.

It’s astounding, really. But the Grizzlies (32-17) have plenty of statistics that jump off the page.

Did anyone expect Jaren Jackson Jr., who missed most of last season after knee surgery, to be one of only four players to have played in 48 games already this season?

So far, he’s been the only constant in the Memphis lineup. He’s also third in in the NBA blocks per game.

Tyus Jones, for the fourth season in a row, leads all league rotation players in assist-to-turnover ratio.

Steven Adams is first in offensive rebounding percentage. He is clearly a beneficiary of all those Morant drives.

And then there’s Brandon Clarke, quietly having a tremendous third season, playing at the fastest pace in the NBA, per the advanced metrics, and a top 10 player in effective field goal percentage.

More from your Insider:

Morant scores 35, but short-handed Grizzlies drop one to Mavericks

The Mavericks took advantage of the Grizzlies’ depleted roster, slowing the pace and taking away points in the paint.

Listen to John Hollinger on the Grizzlies’ breakout season